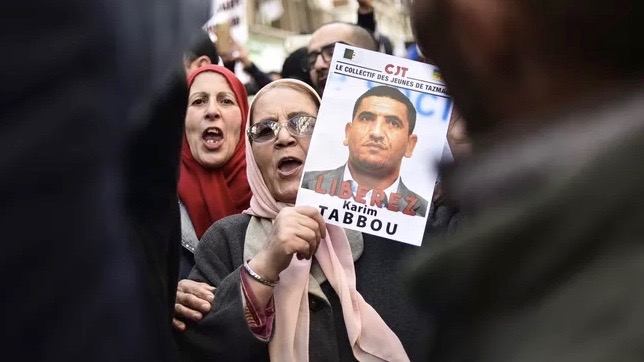 An Algerian court started the trial of well-known Hirak movement activist Karim Tabbou on November 30, Monday, according to statements by his lawyers. 47-year-old Tabbou is accused of “damaging the morale of the Algerian army”. One of his lawyers, Zoubida Assoul, revealed in a Facebook post that the court in Kolea has finally begun the trial after a lengthy delay following multiple postponements due to the ongoing coronavirus pandemic.

The prosecution in the case has asked the court for a three-year prison sentence for Tabbou, along with a 100,000 Algerian Dinar (USD 780) fine. As per vice-president of the Algerian League of Human Rights Said Salhi, the court initially did not allow journalists to attend the trial. However, after widespread criticism, the court finally relented and allowed journalists to witness the hearings.

Tabbou is a prominent leader of the anti-government Hirak protests which began last year in April. He is also the leader of a small political party called the Democratic Social Union (UDS), in opposition to the current government. The Hirak protests successfully toppled the regime of long-time dictator-president Abdelaziz Bouteflika last year. The protests continued even after Bouteflika’s ouster, with protesters demanding the expulsion of all the establishment elite, including corrupt politicians, businessmen, army and other government officials, from positions of power.

They have also demanded solutions to the issues of unemployment, poverty, poor government services, repression of civil liberties and the freedom of speech and expression. Hundreds of activists, journalists and opposition figures have been jailed in Algeria under trumped up charges.

Tabbou was arrested in September 2019 and charged with “attacking the integrity of the national territory” after he had posted a video on his political party’s Facebook page criticizing the Algerian army’s interference in national politics.

Following his arrest, Tabbou was slapped with a year-long prison sentence after being tried in an appeals court in March. In an effort to reach out to the Hirak protesters, the new government under president Abdelmadjid Tebboune, which came into power through fresh elections with a historically low voter turnout, provisionally ordered the activist’s release in July 2020. However, Tebboune’s government has also been involved in massive repression and persecution of hundreds of Hirak activists, lawyers, journalists, bloggers, and others. Algerian prisoners’ rights group National Committee for the Liberation of Prisoners (CNLD) has stated that the government is currently holding approximately 90 activists, social media users and journalists in prison, in a bid to subdue and demoralize the Hirak movement.