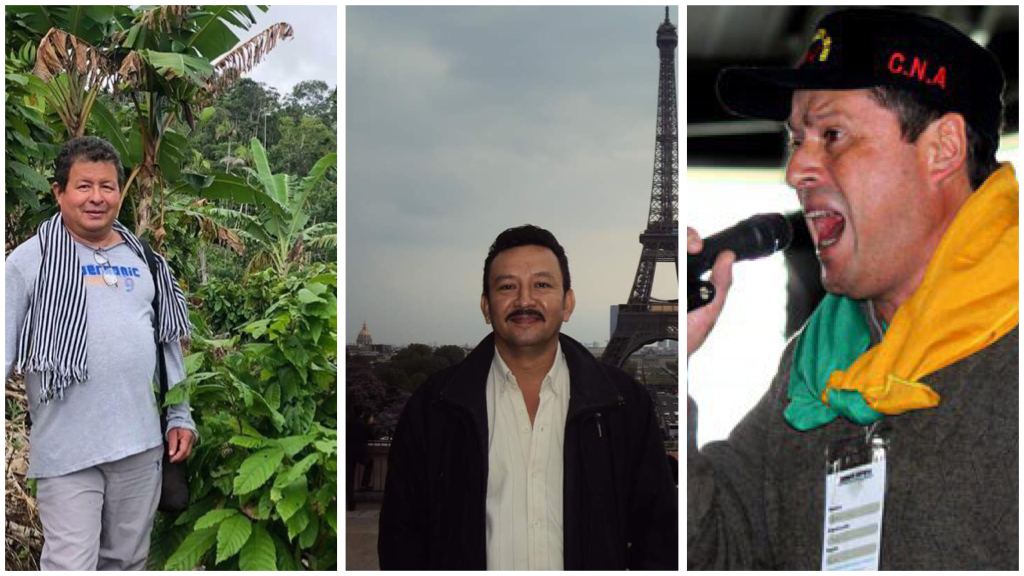 Three well-known peasant and social leaders were arrested by officials of the National Police and the Attorney General’s office in the last 24 hours in Colombia. At around 3am on December 16, peasant leader Robert Daza was arrested in the municipality of Pasto in the southwest department of Nariño. Less than 12 hours before his arrest, at around 5pm on December 15, Teófilo Acuña was arrested in the municipality Barranco de Loba of the Bolívar department, and Adelso Gallo was detained in the city of Villavicencio in the department of Meta.

Daza, Acuña and Gallo are all spokespersons of the Agrarian, Peasant, Ethnic and People’s Summit, a platform of Indigenous, peasant and Afro-descendant organizations, as well as members of the National Agrarian Coordinator (Coordinador Nacional Agrario – CNA, a national peasant organization) and the People’s Congress (Congreso de los Pueblos – CdP).

Those organizations in addition to several other social organizations in Colombia have rejected the arrests and denounced them as cases based on falsified charges that are another reflection of the stigmatization, criminalization and persecution of the social movements and leaders by the right-wing government of president Iván Duque.

Robert Daza is a leader of the Integration Committee of the Colombian Mazico (CIMA), a peasant organization in the Nariño department in southwestern Colombia. He has also been working in defense of food sovereignty in the region and works in a coffee producing cooperative.

Teófilo Acuña is a spokesperson for the Dialogue Commission for South Bolívar, Central and South Cesar as well as processes from Magdalena and Santander departments. He is an important leader in these regions and has been involved in various instances of dialogue with the national government.

Adelso Gallo is a prominent peasant leader from the Political Movement of Social and Popular Masses of Center East Colombia. He is from the eastern Arauca department that lies on the border with Venezuela. Gallo and has had an important role in the denouncements of the abuses carried out by oil companies in the region like Occidental Petroleum. He has been part of the board of the Agricultural Food Cooperative – Coagrosarare, and other community-run companies from the Arauca department, historically persecuted by the legal system.

“These arrests take place in the context of the complaints that have been filed regarding the arbitrary prosecutions and judicial set-ups against members of the social movement. As an immediate precedent to this fact, there is the acquittal and declaration of innocence of several comrades, after extensive processes corresponding to judicial set-ups,” said the CNA and CdP in an official statement.

An example of this is the case of social leader Julián Gil, who was released fifteen days ago after being held in prison for 30 months.

The Political Movement of Social and Popular Masses of Center East Colombia, also denounced the arrests in a joint statement with CdP. “To the long list of assassinated leaders in different parts of the country, there are so many others who, because of their social work, because of thinking and acting differently from the opinions of the regime, have been prosecuted and imprisoned,” the statement reads.

In the statement, the organizations demanded that the Colombian State stop the genocide against the social movement and release all imprisoned social leaders. They also called on the international community to watch over the social and humanitarian crisis in the country and demand that the Colombian State comply with its commitments to human rights.

The International Network of Brotherhood and Solidarity with Colombia condemned the arrests and denounced that they are a part of the “systematic campaign of criminalization that seeks to delegitimize the actions of social movements like the People’s Congress and the National Agrarian Coordinator that act in direct opposition to the current government.”

This year, the said organizations organized a number of social mobilizations such as the March for Dignity, the Social Minga, the humanitarian caravan in Cañon del Mickay, among other activities, which denounced the political, social and economic situation of the country and demonstrated the president’s incapacity to rule.

According to a report by the Institute of Development and Peace Studies (INDEPAZ) on December 15, 2020, since 2016, 1,090 social leaders and human rights defenders have been assassinated, and 695 of these assassinations, 63%, occurred under the rule of president Iván Duque who took office in August 2018. The report also reveals that in just 2020, 85 massacres have been carried out in the country, the majority in the departments Antioquia, Cauca and Nariño.