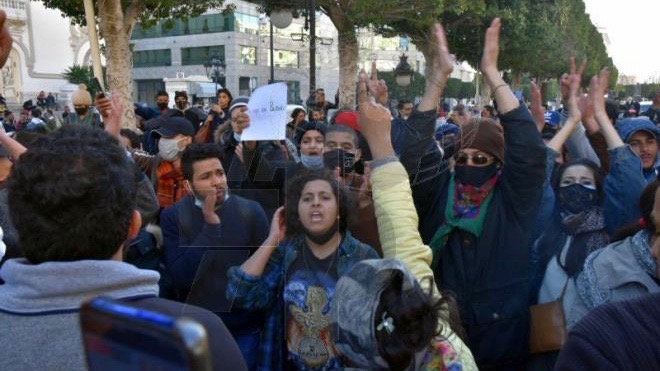 On January 14, 2011, the then Tunisian president Zine El Abidine Ben Ali – who had ruled for almost 23 years – was forced to resign marking a major victory for the Arab Spring protests. Exactly 10 years later, protesters took to the streets again with very similar demands. During the course of a week, mass agitations broke out in many cities in the country even as security forces repressed them with tear gas, beatings and arrests. Over a 1,000 protesters were arrested, many of them between the ages of 15 and 25.  The protests continued on Saturday as well with hundreds taking part in a march in Tunis despite a government ban that cited the COVID-19 pandemic.

The current protests raise certain fundamental questions about the post-Arab Spring political class in the country which has failed to address popular grievances and used repressive methods to curb protests.

State violence is no answer to popular grievances

The use of force by the state against protesters instead of addressing their concerns has especially infuriated the youth of the country. For the majority of them, like Union of Communist Youth of Tunisia (UJCT) member Sana Bouzazi, the accumulated failures of the post-Ben Ali governments to curb corruption, unemployment and poverty has led to serious doubts about the system they helped create in 2011. The UJCT is the youth organization of the Workers Party of Tunisia.

According to Sirine Elwardi, another member of the UJCT, the more force the state will use, the more intense the protests will be. She argues that while protests against widespread poverty, hunger and unemployment have been going on for long, they have acquired a massive scale this year mainly due to the strong-arm tactics by the state.

Baazaoui pointed out, “The state is using the exaggerated claims of violence and loot by the protesters to distort and defame it,” adding that this method of defaming protesters was used by the Ben Ali regime as well. She, however, asserted that if Ben Ali could not succeed in derailing the protests, the current regime will also fail to do so.

Lack of state response to rising poverty and unemployment

Both Bouzazi and Elwardi said the current protests are primarily a response to the falling standards of living, rising poverty and unemployment, particularly among the youth. The failure of successive governments in addressing these issues has led to an increasing number of people and groups questioning the entire system in the country which was celebrated as the only success story of the Arab Spring.

The governments’ failures have become starker after the outbreak of the COVID-19 pandemic. In a country where the tourism sector is the largest employer after agriculture, global lockdowns have greatly affected the sector. The decline in tourist inflow, which would otherwise have peaked between June and October, led to massive seasonal and permanent unemployment.

Tunisia’s economy shrank almost 9% last year – the largest contraction since its independence in 1953. The official rate of unemployment is around 16%. However, the majority of those employed are in seasonal and temporary jobs. Unemployment in the age group of 15 to 25 is over 36%. Though the government has tried some ad hoc measures like banning companies from firing employees during the lockdowns, these are not sustainable. The rising prices of essential commodities have added to the woes of the poor and working class people at a time when incomes have shrunk.

The lack of income and employment opportunities has led to the largest exodus of Tunisians from the country in recent years. As per the Tunisian Forum for Economic and Social Rights, the country saw a massive jump in migration last year, with 12,883 Tunisians leaving for Italy alone. In 2019, the total number of migrants to Italy was just 2,654. The real numbers are likely to be higher because a large number of migrants are unaccounted.

Crisis of legitimacy: “The People want the fall of regime”

Elwardi emphasizes that the ruling dispensation which is dominated by parties such as Ennahda and Heart of Tunisia are adept at performing well in elections by utilizing the widespread networks and tapping religious identity even as they have refused to engage with the issues of the people. On the other hand, leftist organization such as the Workers Party, which have been in the forefront of engaging with the people, have struggled to break the electoral dominance of the religious and corporate-sponsored parties. For many, this is a sign of the crisis of legitimacy faced by the political system.

Incidentally, apart from visiting some centers of the agitation in Tunis and and appealing for calm, president Kais Saied and prime minister Hichem Mechichi have done nothing to address the issues raised by the protesters.

It is clear that the government knew that the protests were coming since it issued a four-day lockdown on the occasion of the anniversary of the 2011 protests citing rising cases of COVID-19. As per Elwardi, this was “a purely political decision” and a sign of the wide distrust between the people and the government.

The government has tried to project the protests as something unexpected. The TAP new agency, on Monday, quoted officials as saying that they are unclear on the real reasons for the protests. It was only on Tuesday, the fourth day of the protests, that Mechichi issued a statement acknowledging the reasons for the unrest and repeating his appeal for calm without announcing any concrete steps to address the issues.

Given the state’s reluctance to acknowledge the people’s issues and take concrete steps to address them, the protesters have lost all hope in the current dispensation. It is thus no accident that throughout Tunisia, the slogan of the Arab Spring echoes again: “The people want the fall of the regime.” 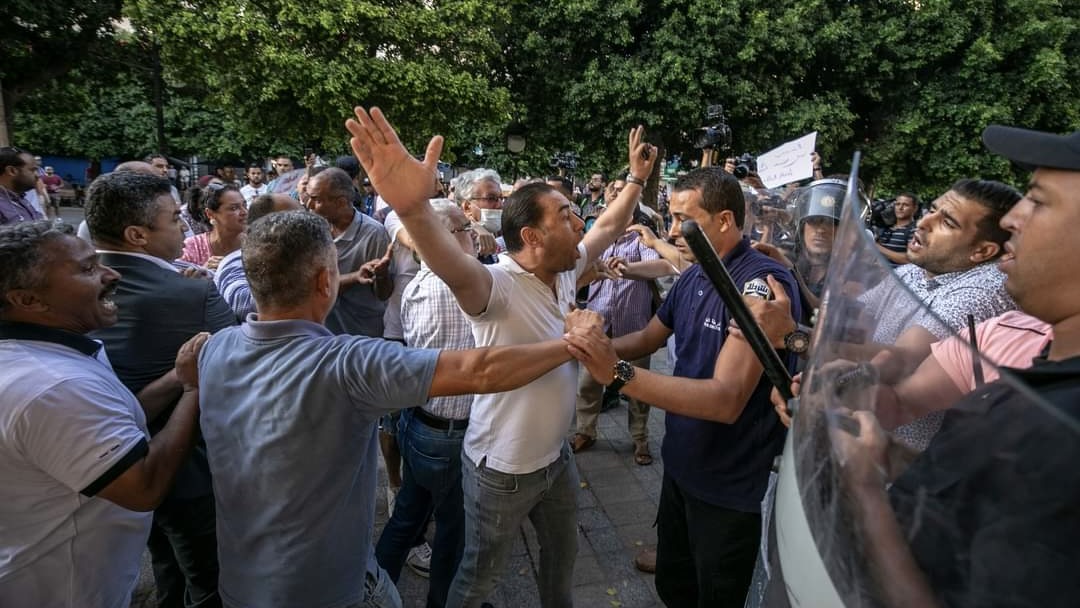