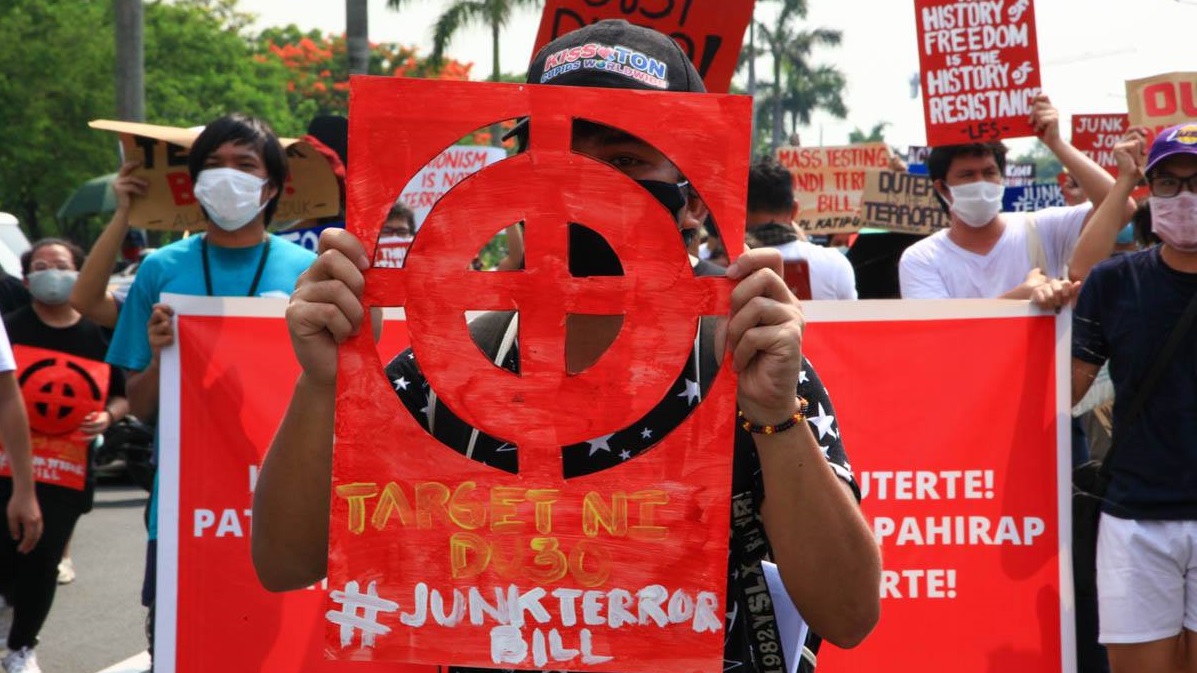 A protest held in Manila against the then proposed Anti-Terror Act in June 2020. Photo: Kathleen Lei Limayo/350.org

Activist groups in the Philippines held a demonstration near the national capital, Quezon City, four days before the beginning of judicial hearings on controversial anti-terror law. The demonstration held on the campus of the University of the Philippines – Diliman, on Friday, January 29, was a “Grand Send Off” for the legal team fighting to have the law repealed in the Supreme Court. The demonstration comes at a time when officials of the government’s anti-insurgency body have engaged in red-tagging the lawyers for the petition against the law.

In a recent Facebook post, Antonio Parlade, a spokesperson of the National Task Force to End Local Communist Armed Conflict (NTF-ELCAC) and a senior military official, questioned the motives of those opposing the law, including the petitioners and the advocates. Parlade also engaged in a “red-tagging” (making baseless allegations of association with Maoist militants) of the petitioners and also legislators of the left-wing grassroots Makabayan Bloc.

Parlade, who also holds the rank of lieutenant general and heads the Southern Luzon Command of the Armed Forces of the Philippines, also made a veiled threat against the petitioners, in the post, saying: “Very soon, blood debts will be settled.”

In a statement announcing the demonstration and inviting activists to the event, the Movement Against Tyranny (MAT), an organizer of the demonstration, said that the “grand send off” is also “a way of showing support to the (University of the Philippines), which has borne the brunt of the government’s red-tagging campaign in schools and universities.”

On the same day, the Supreme Court also announced its decision to appoint an amicus curiae, retired associate justice of the Supreme Court, Francis Jardeleza, for the upcoming trial, seeking his views on the law. In the same order the court also took cognizance of the statements made by Parlade, and asked the Office of the Solicitor General to respond to the threats made against the petitioners.

The order on Parlade was in response to a manifestation submitted by a group of petitioners led by former senior associate justice Antonio Carpio. The appointment of Jardeleza was also partly a result of Carpio’s and other petitioners’ opposition to the solicitor general Estelito Mendoza’s bid to become the amicus curiae, on the grounds that he consistently supported the law and publicly called for the petitions against the act to be dismissed.

The controversial Anti-Terror Act (ATA) was passed by the government of president Rodrigo Duterte in July 2020, at the height of the COVID-19 pandemic. Rights groups have pointed out that the law does away with state responsibility in instances of wrongful arrests and other protections to the accused afforded in previous laws dealing with insurgencies and terrorism.

Activists have argued that the government made use of the pandemic to push through a law that severely restricts civil liberties and undermines constitutionally protected rights in the country.