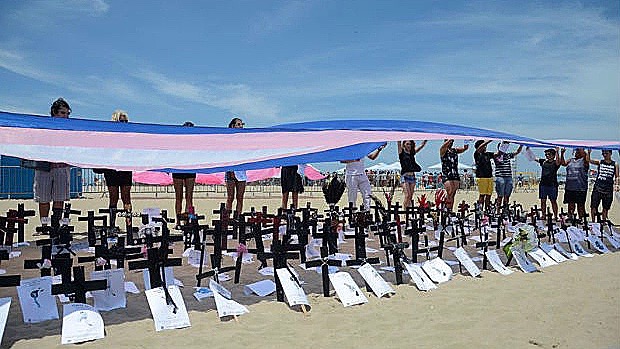 Around 70% of the trans population was unable to access government assitance during the pandemic. Photo: Tomaz Silva/Agência Brasil

In 2020, 175 trans women were murdered in Brazil. The figure represents a 41% increase over the previous year.

The data is presented in the National Association of Transvestites and Transsexuals (Antra) dossier released on Friday, January 29th, the Brazilian National Day of Trans Visibility.

Last year’s index is 43.5% above the average recorded since 2008, when monitoring started. There was a 201% increase in such crimes during that period.

Unlike in other years, in 2020 all murders were against transvestites and trans women, and no evidence was found of the murder of trans/trans-male men.

The months with the highest number of murders were January, February, May, June, August and December. In other words, there was a significant increase in deaths even during the novel coronavirus pandemic, when the trans population is facing greater socioeconomic vulnerability.

In absolute numbers, the state of São Paulo was the state that registered the majority of deaths, with 29 murders, an increase of 38% in relation to the previous year. This is the second consecutive increase in the state. In 2019 there was a rise of 50% compared to 2018.

São Paulo is followed by Ceará, with 22 cases, an increase of 100% in one year. The northeastern state drew media attention for the recurring cases between July and August, a period during which nine murders occurred.

Bahia comes in third place, with 19 murders. The three states are among the first on the list since 2017.

Bruna Benevides, Antra’s political articulation secretary and one of the authors of the dossier, says that violence against the trans population is closely linked to the lack of basic rights, such as education and health, as well as family exclusion and a complete absence of public protection policies.

It was the various forms of violence and the structural neglect of the State that, according to her, made it impossible for trans women to live in social isolation during the proliferation of the coronavirus, leaving them more exposed to contamination and violence during the greatest health crisis in history.

“We are talking about a population where the majority live in a vulnerable situation and really needed, during the pandemic, to remain on the streets to prostitute themselves. They were much more exposed, since there was less policing, fewer people on the street, a scenario that favors impunity,” says Bruna.

Antra identified that 72% of the murders were of transvestite and transsexual women prostitutes. According to the organization, 90% of this population works in prostitution, while only 6% is in the formal labor market and 4% is in the informal one.

A trans woman who serves in the navy, Benevides also affirms that the crimes are characterized by refinements of cruelty, by the excessive use of force and desecration of the bodies. For her, the murders are driven by the hate speech that reverberates throughout Brazil.

“We observed a disproportionate increase [in cases] at the same time that government policies, especially the federal government, publicly hold, including at the international level, an anti-trans and anti-gender agenda and posture,” points out Benevides.

According to her, in taking a stand against the debate on gender diversity, the government turns the trans population into an enemy. “When this enters the mind of the ordinary citizen, it stimulates this hatred that results in murder. The narrative does not kill, but it directs the violence to the target,” criticizes the activist.

In addition to cases of violent deaths, Benevides points out that this narrative also “leads to suicide, and to illness due to mental health issues.”

“There are several murders: the symbolic, when people do not have their gender identity or social name respected, when trans people are not hired or do not move in social environments, and finally, murder aimed at annihilating the existence of this group,” she points out.

According to the Transgender Europe organization, in 2020, Brazil also remained in first place among the nations that kill the most transgender people worldwide for the 13th consecutive year.