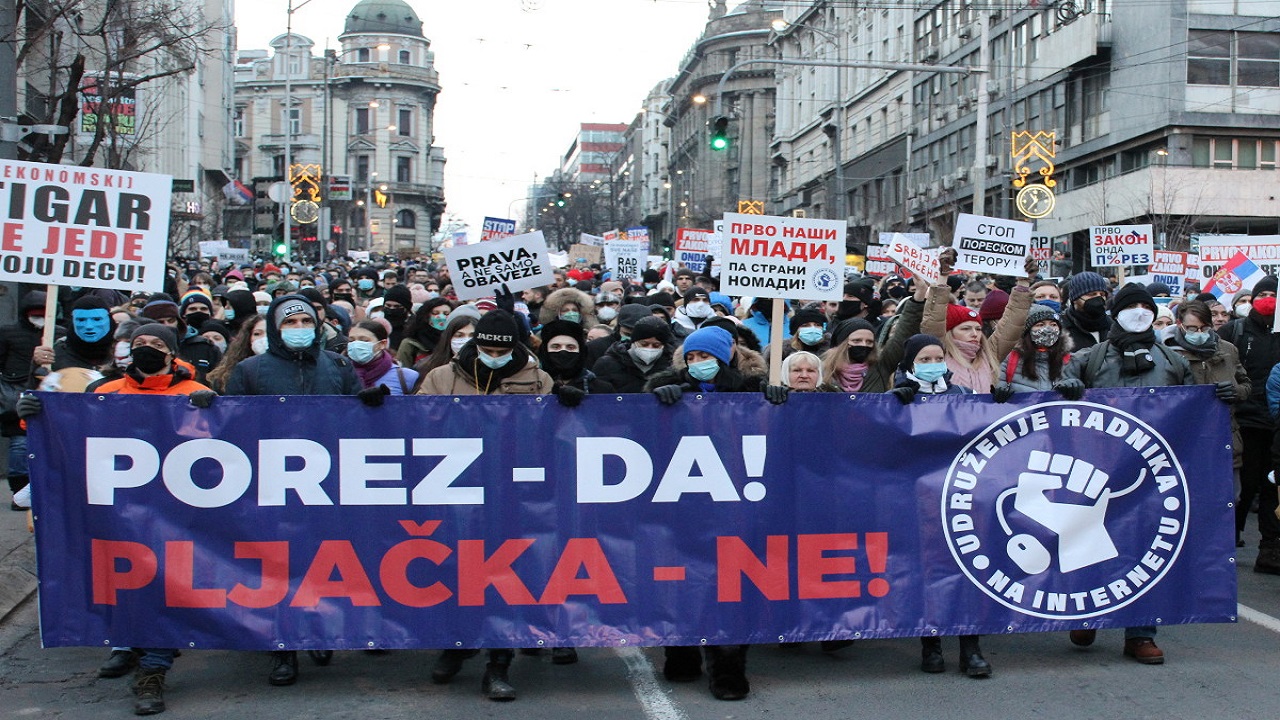 A protest by the Association of Online Workers. (Photo: Marko Miletić / Masina)

Online workers across Serbia are protesting taxes imposed by the government on their payments from abroad. The workers have formed a union, the Association of Workers on the Internet (URI), and are mobilizing. Peoples Dispatch (PD) talks to Miran Pogačar, president of the URI, on the ongoing protests, their demands and response from the government.

Peoples Dispatch(PD): What necessitated the formation of the Internet Workers Association (URI) in Serbia? Could you talk a bit about your protests and your demands?

Miran Pogačar(MP): Even though Serbia ranks fourth in Europe based on its market share in the global digital workforce, for years, digital workers in Serbia were invisible when it came to laws and regulations. They had no right to a pension or healthcare, and no way of defining their employment status legally.

As the unemployment rates in Serbia are sky-high, the National Unemployment Office even recommended finding work with foreign companies. It even subsidized courses for digital workers without mentioning any obligations that come with freelance work.

At the same time, Serbian tax authorities had been misinforming citizens who inquired about their tax obligations. They claimed that our line of work wasn’t regulated by law, that they had no framework for taxation, and they sent out the same message: we weren’t supposed to pay anything, and we couldn’t if we wanted to.

And then, in the year of the pandemic, on October 13, 2020, in a Facebook post, the Tax Administration called all private persons who had received money from abroad to calculate and pay their taxes and social contributions. The taxes and contributions were to be paid for the previous five years, with interest, all within 15 days and in a single installment.

This kind of taxation threatened to burden most digital workers in Serbia with an unpayable debt, one that could push an overwhelming majority of them into unemployment, poverty, and homelessness. For example, a worker with an average income of 500 EUR would have to pay at least 13,000 EUR, plus interest.

The issue mobilized a considerable number of digital workers to organize. It started with a Facebook page, and after that, we formed the Internet Workers Association (URI).

The government ignored all invitations to a dialogue, while sending out more than a thousand letters to its citizens, demanding that they pay the impossible. That was when we organized our first large protest in just two days.

Our demands were, and still are, simple: stopping all controls and defining our legal status within a reasonable framework.

PD: What happened at the negotiations with the government? What have been the proposals from the government and why is it unacceptable for the URI?

MP: Let’s start with the one demand that the authorities partially met. The government temporarily ceased all controls until April, when the new law was promised.

When it comes to the new proposal, three things are different compared to the government’s initial plan. They are offering a 10-year payment plan, interest write-off, and the reduction of the taxable sum to 57% of the total, although the last one is not guaranteed.

The problem with the 10-year payment plan is that it is also unpayable. Combined with current taxes and contributions, the sum would amount to roughly 50% of the total income, provided that the freelancer’s income remains constant for the next 10 years. It will push the majority of people into poverty and, in case a single payment is missed, it could result in whole families losing their homes.

The offered proposal is unacceptable because it does not solve the problem of freelancers in any way. It only prolongs the debt slavery to a full decade—and that’s the best case scenario! Due to the nature of our work, the worst case scenario – homelessness and extreme poverty – would be hard to avoid for many.

PD: Tells us a bit about the ongoing Road to Solidarity campaign by the URI? What has been the response from the political parties, trade unions and the general public towards your cause?

MP: After four months of combating the problem, members of our Association wanted to form closer bonds with one another. It’s time to talk face to face and consolidate the people in our organization. We want to hear what people think, exchange ideas outside of social networks, and rethink our strategy.

On numerous occasions, we were approached by political parties, but our answer to their invitation for direct cooperation remains the same—we are thankful for your support but this is our fight, and our fight only. The Serbian government controls a large portion of the media and it is well known for ruthlessly smearing opposition parties, including everyone tied to them. We just want to remain faithful to our purpose—improving the position of freelancers and finding a way to stay in our country and live a decent life.

We received full support from the two biggest unions. They offered to help, they expressed their support publicly and wrote to the government to express their concerns.

When it comes to the general public, as mentioned above, the government controls almost all media, but we managed to turn things around quite a bit. Social networks helped, protesting helped, and direct, honest, and authentic communication with the media led to increased understanding and support from all over the country.

PD: What’s your proposal towards “a sustainable, transparent and precise tax-legal framework for workers on the Internet” in Serbia?

MP: Our proposal is that the calculation and collection of taxes, pension and healthcare should start from October 14, 2020, when the Tax Administration of Serbia announced to the general public that it will start charging it for the ongoing and the past 5 years.

We propose to pay the tax only, which is 20% of income under the current law, and include pension and health care contributions only with the passing of the new law which will have to grant us the right to benefit from them.

Our proposition would reduce the workload for the Tax Administration and we would immediately start working on the Flexible Forms of Work Law. This new law is supposed to finally create a precise legal framework for all freelancers in Serbia.