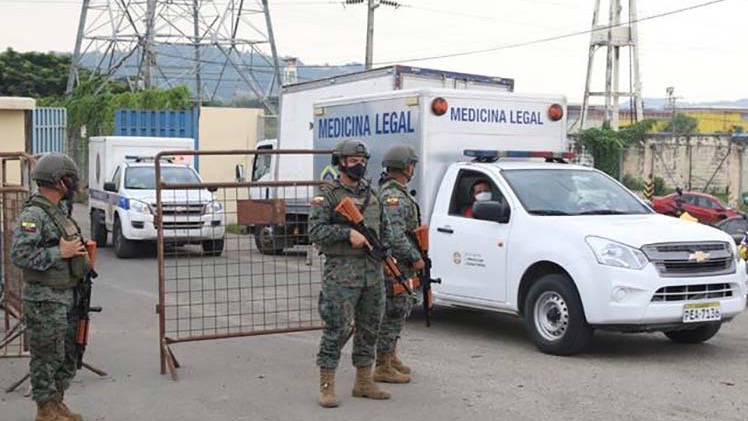 80 inmates died and several were injured in the four simultaneous prison riots in Ecuador on February 23. Photo: Prensa Latina

On February 23, massive simultaneous riots broke out in three prisons in different cities of Ecuador, which left 80 inmates dead and several injured. According to the authorities, the riots were sparked by a power struggle between rival criminal gangs within the prisons. The clashes were considered the worst massacre in the prison system of the country. The incidents received widespread condemnation and drew criticism of President Lenín Moreno’s administration. The ombudsman’s office also condemned the increase in crime and violence in prisons and held the national government responsible.

In an official statement, signed by the ombudsman, Freddy Carrión, the entity described the events as “unprecedented massacre” and denounced that “the lack of attention and a comprehensive policy of social rehabilitation has played a leading role in exacerbating the problems of social and prison violence.”

The statement added that “the lack of design, implementation, and evaluation of public policies for citizen security is the reason behind what is currently happening in detention centers, with which the State fails to fulfill its role as guarantor of the rights to life, personal integrity and security of the people in its custody.” The public agency also urged to open a prompt and impartial investigation and sanction those who are responsible.

The director of public policies of the ombudsman’s office, Cristian Bahamonde, also blamed the government. “The events that occurred yesterday could be prevented, it is not something sudden and shows that the government has lost control of the prison system,” Bahamonde told the local press. “In the last two years the prison system has lived through states of emergency, but no work has been done on issues such as overcrowding. We are reaching 40,000 prisoners when the state can only support 25,000,” added Bahamonde.

The presidential candidate for the progressive Union for Hope alliance (UNES), Andrés Arauz, also criticized the national government, and demanded that Moreno take responsibility for the unfortunate incidents and protect the lives of policemen, people deprived of their liberty and all citizens. He expressed his solidarity with the families of the victims.

Likewise, international human rights organizations such as the United Nations (UN), the Regional Human Rights Advisory Foundation (INREDH), and the Inter-American Commission on Human Rights (IACHR) also expressed their concern about the prison crisis in Ecuador.

In the violent acts that took place on Tuesday, 31 inmates died in center no. 4 and 6 inmates in center no. 1 of the Guayaquil prison; 9 in the Latacunga prison in the Cotopaxi province; and 34 in the Turi prison in the Azuay province. Reports from prison workers stated that security forces deliberately waited until the massacres were over before intervening.

Yesterday, on February 24, the National Comprehensive Care Service for Adults Deprived of Liberty and Adolescent Offenders of Ecuador (SNAI) reported of a new riot in the center no. 4 of Guayaquil prison, in the Guayas province. At the same time, the general commander of the National Police, Patricio Carrillo, reported that “in the face of the aggressiveness and irrationality of the criminal groups, the police will enter the center again with the necessary rational force.” The authorities are yet to provide figures for possible injuries or deaths in the fresh clash.

Case against Ola Bini has consequences for all of Latin America, says report