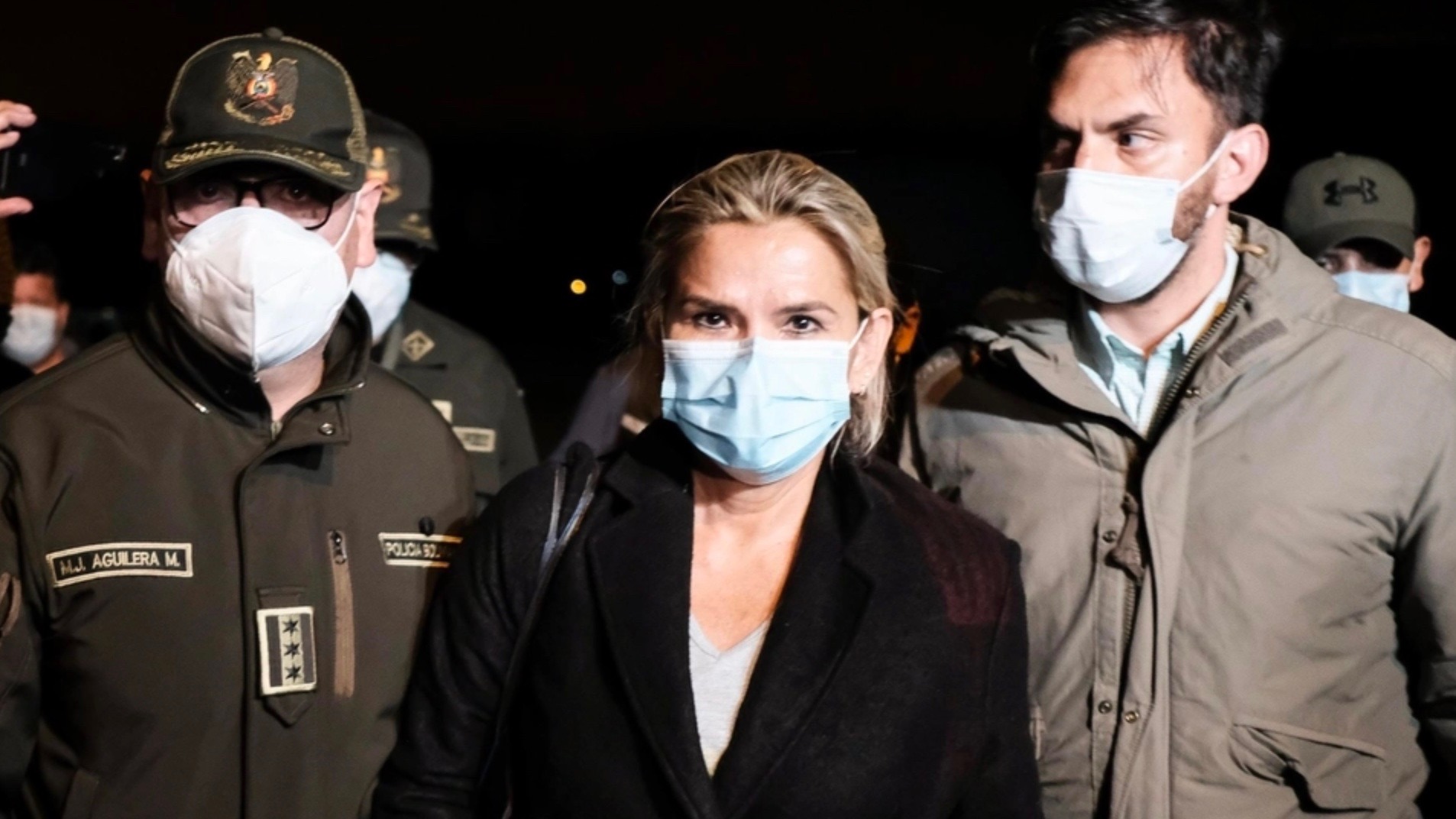 Former coup leader Jeanine Áñez was arrested early on March 13 due to her participation in the coup against Evo Morales on November 10, 2019. Photo: Telam

On Saturday March 13, Jeanine Áñez, who was the leader of the coup-installed regime in Bolivia, was arrested by authorities in the early hours of the day. The arrest came a day after a prosecutor in the Bolivian capital La Paz ordered the detention of Áñez, several people who worked alongside her in the coup regime and leaders of the security forces. They have been charged with terrorism, sedition and conspiracy.

The charges are related to the plotting and execution of the coup d’état carried out by the right-wing supported by the armed forces, on November 10, 2019 which overthrew the democratically-elected president Evo Morales and forced him to flee the country, amid threats and acts of violence against him and his family members. The prosecutor pressed charges following an official complaint filed by Lidia Patty, a former MAS legislator, who declared that Áñez, several ex-ministers, former members of the military and the police, as well as far-right political leader Luis Fernando Camacho, planned and promoted the overthrow of Evo Morales in November 2019.

Following Morales’ forced resignation, Jeanine Áñez illegally seized power and ruled Bolivia for a year until Morales’ Movement Towards Socialism (MAS) won a landslide victory in the elections held on October 18, 2020. During her time in power, in addition to the overall subversion of the democratic order and the rule of law, the regime oversaw and authorized systematic human rights violations in order to silence opposition to the coup and consolidate power. This includes the two massacres of Senkata and Sacaba, violent repression of protests, persecution of political opposition activities, the granting of impunity for members of the armed forces involved in rights violations, and more.

The coup regime also sabotaged Bolivia’s economy with its neoliberal policies that favored transnational corporations and international financial institutions. Áñez’s regime was also implicated in several corruption schemes which involved the embezzlement of money during the purchasing of essential goods to fight the COVID-19 pandemic.

Following her arrest, Evo Morales wrote on Twitter, “For justice and truth for the 36 fatal victims, the more than 800 injured, and the more than 1,500 illegally detained during the coup d’état. The authors and accomplices of the dictatorship that looted the economy and attacked life and democracy in Bolivia must be investigated and sanctioned.”

Morales, like dozens of members of the MAS and other social and political movements in Bolivia, was a victim of political persecution following the coup. On December 18, 2019, just over a month after the coup was carried out, Auturo Murillo, the Minister of the interior of the regime, announced on Twitter that an arrest warrant had been issued against Morales. The arrest warrant issued by the special anti-corruption prosecutor accused Morales of sedition, terrorism and financing of terrorism. It called on the police to apprehend Morales and bring him to the attorney general’s office. The warrant and the charges prevented Morales from returning to Bolivia and deprived him of his political rights. In the elections of October 2020, Evo was barred from running for senator.

The arrest of Áñez has been applauded by many across the world as an important step in the struggle for justice in Bolivia following the year of violence and abuse in the aftermath of the coup. However, far-right leaders in Bolivia, who were once calling for the arrest and persecution of MAS, have now condemned the arrest of Áñez and others as “political persecution” and a “witch hunt.”

Áñez herself wrote on social media that her arrest warrant was “an act of abuse and political persecution” and that the government was “accusing her of having participated in a coup d’état that never occurred.”

Meanwhile, many have pointed out that several key leaders of the coup government, who also face changes, have escaped. Before the MAS government took office in early November, Arturo Murillo and the Minister of Defense, Fernando López, who are both accused of ordering the violent repression of anti-coup protests, fled to Miami. Out of the nearly 12 mentioned in the arrest warrant, only Áñez, Álvaro Coimbra, the former Minister of Justice and Rodrigo Guzmán, the former Energy Minister, have been arrested.

The tyrant Jeanine Añez has been detained. The Biden administration must hand us @ArturoMurilloS & @Ferlopezjulio1, they're in Miami, escaping charges for their role in the massacres in Bolivia.

Editors note: the MAS party name was incorrectly written and has since been corrected.