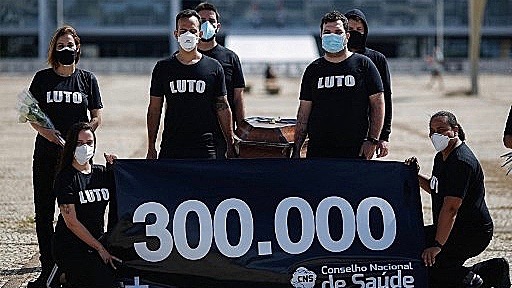 Health professionals carry a coffin to protest the death of 300,000 people from the COVID-19, at the square of the Three Powers, in Brasilia, on March 25, 2021. Photo: Sergio Lima / AFP

The uncontrolled advance of COVID-19 in Brazil leaves behind a tragic figure of 5,094 deaths having been reported to the National Council of Health Secretaries, Conass, this weekend alone, a sum of the fatalities that occurred on Saturday March 27 and Sunday March 28.

There were 3,438 deaths on Saturday – the third day that the 3,000 mark was surpassed since the start of the novel coronavirus pandemic, in March of last year.

In addition to registering an average of 106 deaths per hour, Conass also received 130,274 notifications of new cases of covid-19 in Brazil over the weekend. Of these, 85,948 on Saturday and another 44,326 today.

According to the agency, with yesterday’s records, the country ended the week with the highest number of cases – in official numbers – of the entire pandemic, with 539,903 notifications in seven days. It was also the third consecutive week with more than half a million new cases of the illness.

Until the publication of this article, Conass had not updated data for the week that ended yesterday, in relation to the total number of deaths. But the truth is that it was also the worst period yet in this regard as well.

Unlike what happened in Brazil during the so-called first wave of the COVID pandemic, the current escalation of cases and infections is impacting younger age groups. This is what a survey of “Brazilian ICUs”, done by the Brazilian Association of Intensive Care Medicine (Amib), released yesterday by the Folha de S.Paulo newspaper, points out.

According to Amib, the percentage of people up to 45 years of age admitted to the country’s 1,593 public and private ICUs beds, increased 193% between February and March of 2021, when compared to the period from September to November of 2020.

Amib’s data is similar to that in the most recent edition of the Fiocruz Covid-19 Observatory Bulletin, released on Friday (26th), which also points to more infections among the younger population.

In a report by Folha de S.Paulo, Fiocruz public health researcher Raphael Guimarães, said that there is still no evidence that a higher number of, and more severe infections among the young, are related to any known, more aggressive strain of the novel coronavirus.

Studies are underway to prove or disprove the hypothesis. However, the scholar affirms that “a higher incidence of the illness in an increasing number of young people, regardless of severity, can be directly associated with low adherence to social distancing. The truth is that people don’t want to believe that certain groups are behaving badly”.