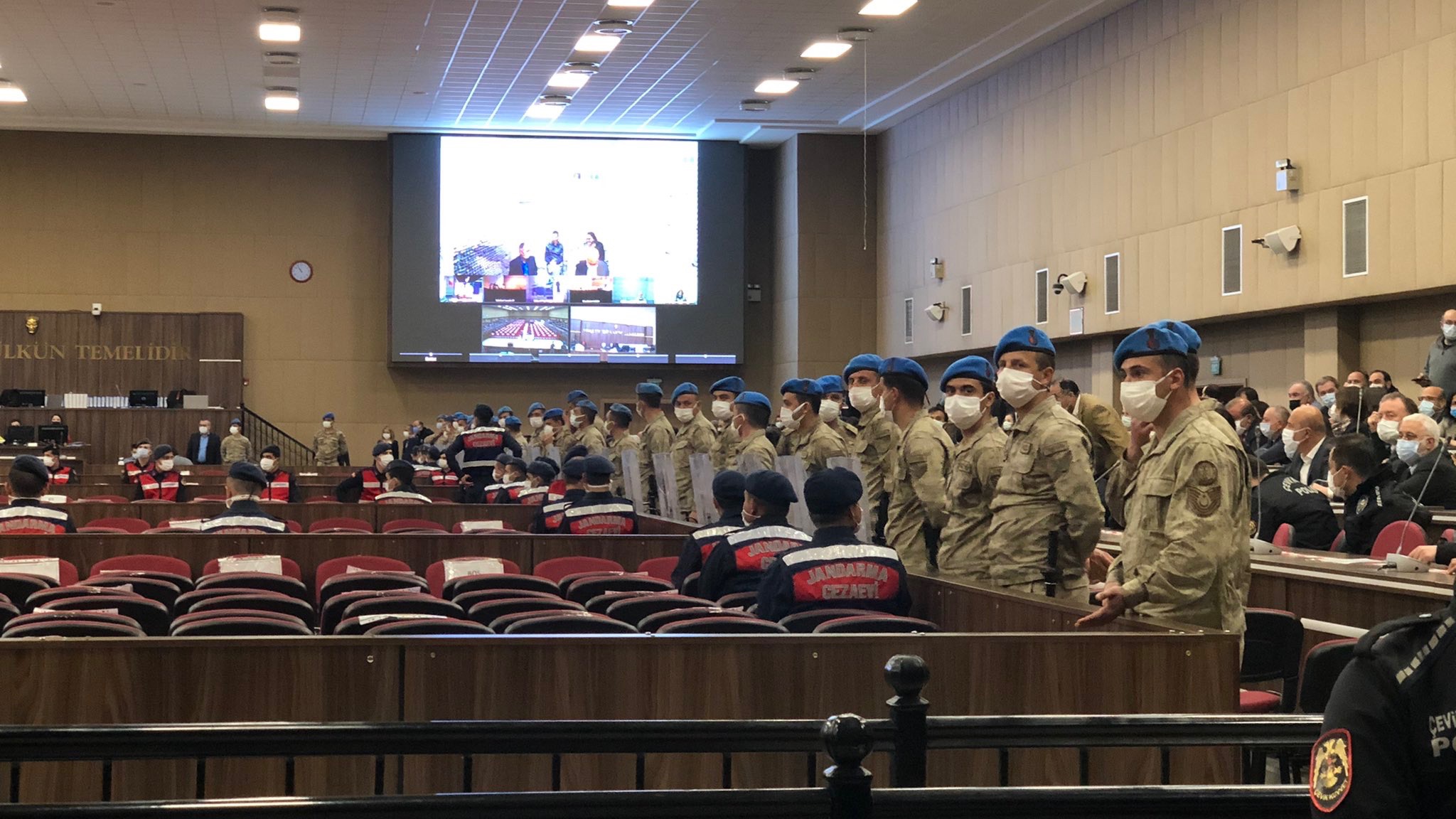 The trial of 108 members of the progressive HDP party in Turkey began on April 26 amid widespread international condemnation. Photo: PI

The trial of the 108 members of the leftist Democratic Peoples’ Party (HDP) including its former co-head and former presidential candidate, Selahattin Demirtas, began yesterday April 26 in the Turkish capital Ankara. The members of the HDP are being tried over their alleged involvement in protests in 2014 in which at least 37 people were killed largely by state security forces. The proceedings were accompanied by heavy protest both inside and outside the courtroom over violations of due process, which prompted protest by the legal defense team and led to the adjournment of the trial till May 3.

At the start of the proceedings, nearly 100 defense lawyers were barred access to the courtroom allegedly due to COVID-19 restrictions. However, as many pointed out, dozens of riot police were occupying the space allocated to them inside the hall. Later when the summary of the 3530 page indictment was read out, several defendants who were attending the trial via video call attempted to communicate that their sound had been cut off. According to reports, when the defense team demanded that these defendants be given speaking rights, the request was rejected and members of the defense left the court in protest. Remaining defense lawyers filed several recusation requests which were all rejected, and court authorities called for the trial to be adjourned until May 3.

The members of the HDP, the third largest party in Turkish parliament, are being tried over their alleged involvement in violence during the anti-Islamic state (ISIS) protests in the country in October 2014. The accused includes several of ex-elected members of the Turkish parliament and mayors and party’s former co-heads Selahattin Demirtas and Figen Yuksedag. They are tried for 37 counts of homicide and disrupting the unity and territorial integrity of the state.

The 2014 protests were called after the Islamic State attacked a Kurdish majority town of Ain an Arab also known as Kobanê in the Eastern Syria in October that year. The protesters had also highlighted that the Turkish armed forces did nothing to protect the Kurds from Islamic state terrorists. The HDP had extended its solidarity with the protests with several members tweeting in support.

Selahattin Demirtas, a presidential candidate in 2014 was arrested on November 4, 2016. At the time, he was the co-head of the HDP. He contested the presidential election again in 2018 from jail. He has been charged with organizing the Kobanê protests and “inciting people to commit crimes” and “leadership of a terrorist organisation”. If found guilty he can be sentenced to up to 142 years in prison.

In June 2020, Turkey’s Constitutional Court concluded that Demirtas’ prolonged detention violated his rights. Months later in December, the European Court of Human Rights had found no evidence of incitement saying that his tweets remained within “the limits of political speech” and had ordered his immediate release also asking the Turkish government to provide him compensation for violating his rights.

The ECHR’s verdict was rejected by Turkish government with Erdogan calling the court biased against Turkey.

“Democracy is on Trial in Turkey”

Calling Demirtas’ trial, a trial of democracy in Turkey, Progressive International (PI) issued a statement saying that, “the HDP is not alone. The tactics of legal warfare, or ‘lawfare’, have been trained against lawyers, journalists, activists, and political representatives across Turkey, as Erdoğan seeks to consolidate his power.” It asserted that PI stands with the HDP as “their values of peace, pluralism, feminism and internationalism are core of our project” and called for a global solidarity campaign against the trial.

Recep Taayip Erdogan’s AKP and its ally Nationalist Movement Party (MHP) have been cornering the HDP over its alleged links with Kurdish Workers Party (PKK) which is banned in the country for its separatist acts. Several of the MPs of HDP have been disqualified in recent years and some of them are also sentenced to various terms in jail on similar charges.

Despite HDP’s repeated denial, last month government officials moved to a Turkish constitutional court to disallow the party on the basis of its alleged links with the PKK. Though the court has sent the petition back on technical ground it can be resubmitted.

Reacting to the trial, veteran journalist Frederike Geerdink called it “100% political” in a tweet on Monday.

paywall but what i can read doesn't make me yearn for more. many #journalists need to make one more step in their thinking about the #kurdish issue in #turkey: it's the state that's murderous, the trials 100% political. that should be your starting point, not the state narrative. https://t.co/FA7rlMhKoi

The Socialists and Democratic group in the European parliament also expressed solidarity with HDP and sent two of its MPs to Ankara for the trial.

Our MEPs @EvinIncir and @brandobenifei are in Ankara today for the start of the #Kobani trial. It is unacceptable to criminalise demonstrations in support of Kobani's resistance against ISIS. pic.twitter.com/NnP6EeXDNQ

Similar solidarity statements were issued by the Left in European Parliament, Socialist Alliance, PEN International among others.