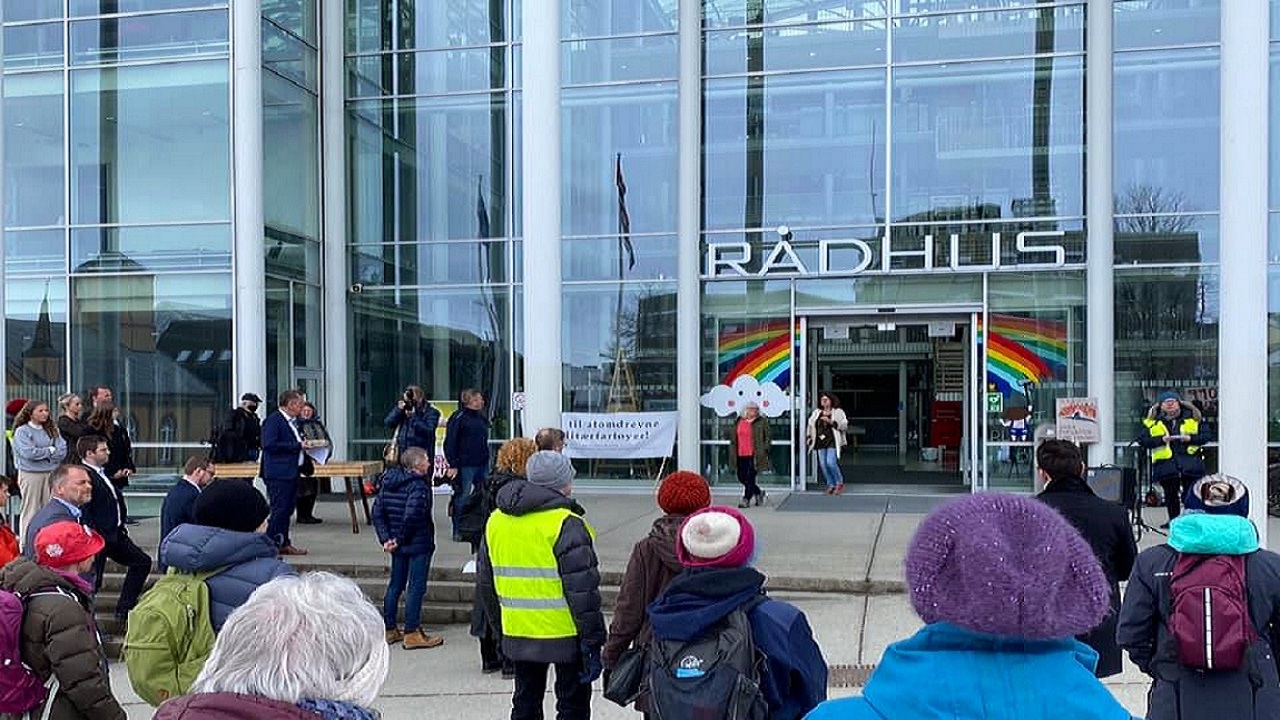 On April 28, Wednesday, peace groups and anti-nuclear activists protested in Rådhusparken in Tromsø, Norway, against the arrival of nuclear submarines in the harbor at Tønsnes. Activists from groups such as No to Nuclear Powered Military Vessels in Tromsø (NAM), No to Nuclear Weapons Tromsø and The Grandparent’s Climate Action participated in the protests. The municipal council of Tromsø also discussed the proposed arrival of nuclear submarines.

Norway has become an important host and party to NATO-US military exercises in the Scandinavian region. The Supplementary Defense Cooperation Agreement (SDCA) was the latest agreement signed between the governments of Norway and the US. Under the agreement, the Rygge and Sola airports in southern Norway, and Evenes airport and Ramsund naval base in Nordre-Nordland/Sør-Troms are designated to be developed as bases for US military endeavors.

The Red Party has claimed that the Nord-Hålogaland Home Guard District (HV-16) in Tromsø will face the burden of the mobilizing of security forces for the US at Evenes and Ramsund, and possibly the US nuclear submarines at the Grøtsund industrial harbor in Tromsø. Earlier, the Olavsvern base in Tromsø had also been open for military expeditions but the port was sold to a private party in 2009. Now, along with Haakonsvern in Bergen, Tønsnes in Tromsø is an available option for NATO. Under pressure from the Norwegian government, the Tromsø municipal council was forced to agree to receive allied nuclear submarines at the port despite strong opposition from the local population.

Protesters claim that the municipality of Tromsø, with 77,000 residents, is under-equipped and ill-prepared to ensure the safety of its residents in case of a nuclear accident. According to reports, under pressure from protestors, the municipal council has decided to seek clarity from the law department at the Ministry of Justice on whether it can refuse to fulfill its obligation to receive the allied vessels in its ports.

Jens Ingvald Olsen from the Red Party in Tromsø asked over social media on April 23, “are nuclear submarines, with diplomatic immunity so that the Norwegian authorities cannot inspect the arsenal of weapons, really safe to take to the civilian quay in Tromsø?”

“The population of Tromsø is exposed to an unjustifiably great risk only so that the American crews will have a few days off in a larger city, and not have crew changes in the area between Senja and Kvaløya, as they have done for several years” he said.

Ingrid Margareth Schanche, chairperson of Norway For Peace, told Peoples Dispatch, “the most important struggle for us now in Tromsø, is to stop NATO facilitating a harbor about 18 kilometer outside Tromsø city center. It will be used by NATO’s nuclear submarines as a port of embarkment of equipment and personnel.”