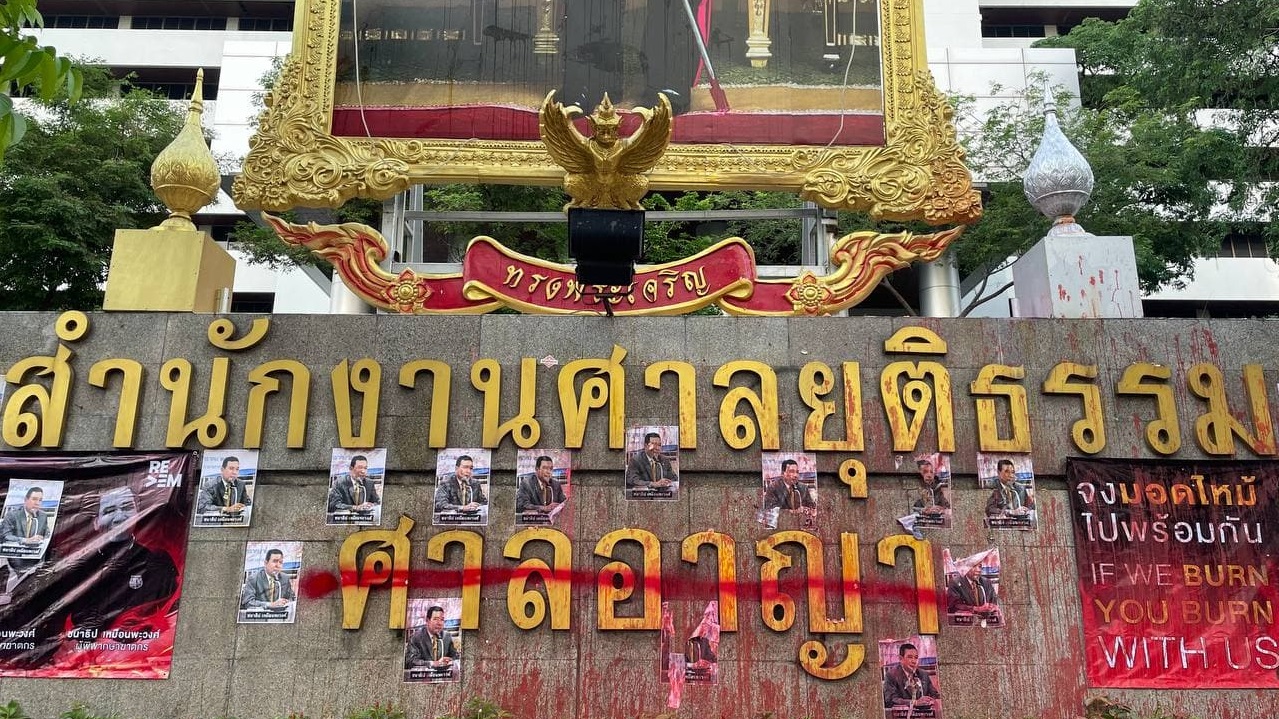 Protesters put up posters and flung red paint at the premises of the Bangkok Criminal Court condemning the denial of bail to activists. Photo: Prachatai/Twitter

On Sunday, May 2, hundreds of people gathered outside the Criminal Court in Bangkok protesting the continued incarceration of activists. The demonstration was called by the youth-led REDEM (Restart Democracy) and is part of the growing calls to release all activists imprisoned for their participation in the protests held last year that demanded political reforms.

The demonstration came in response to the hospitalization of one of the two detained activists on a prolonged hunger strike. Parit “Penguin” Chiwarak has been on a hunger strike for 48 days as of today, while another activist Panusaya “Rung” Sithijirawattanakul has been on strike since the beginning of April.

The two are among the 10 activists under a prolonged pre-trial detention, as they face charges under the nation’s lese majeste law, along with charges of sedition and cybercrimes. Reports of the deteriorating health of Parit and Panusaya over the past two weeks have evoked great concern from family and their supporters.

Authorities admitted on Friday that Parit, who began his hunger strike on March 16, was transferred to a prison medical facility. He has lost over 13 kilograms of weight and has complained of pain while being administered with saline drips.

According to Bangkok Post, authorities also feared that he might go into shock and had to be hospitalized on Friday itself. According to activist groups, Panusaya also reportedly suffered from similar deterioration of her health. Despite a clear decline in their health, the court again rejected their bail applications, along with that of five other detainees last week.

On Friday, Parit’s mother, Sureerat Chiwarak shaved her head in protest outside the court premises. She was joined by several student activists who also tonsured themselves in solidarity with Sureerat and Parit. “They have weaponized the law against my son,” said Sureerat addressing the protesters.

“I would like everyone to remember this and fight for justice. We have to get rid of injustice from our society. Do not let anyone have to face the same loss or pain our family is facing,” she added.

On Sunday, the demonstrators threw red paint and eggs at the court building and called for the resignation of judge Chanathip Muanpawong, who has presided over the bail applications of the detainees.

In the meanwhile, Patchanee Khammak, a labor activist, also pledged to go on a hunger strike in solidarity with the jailed hunger strikers. Patchanee also wrote an open letter of solidarity addressed to Panasuya, which was read out to the demonstrators. Protesters also put up posters and banners against prime minister Prayut Chan-o-cha on the Criminal Court’s signage outside the court complex.

The protest on Sunday was largely peaceful, but after the crowd dispersed in the evening, the riot police assembled outside the courthouse manhandled a group of 30-odd demonstrators who remained along with journalists present there.

According to Prachatai, protesters faced rubber bullets and water cannons after the police claimed the use of fireworks by some of the remaining protesters. The police violence led to the arrest of at least one former student activist.