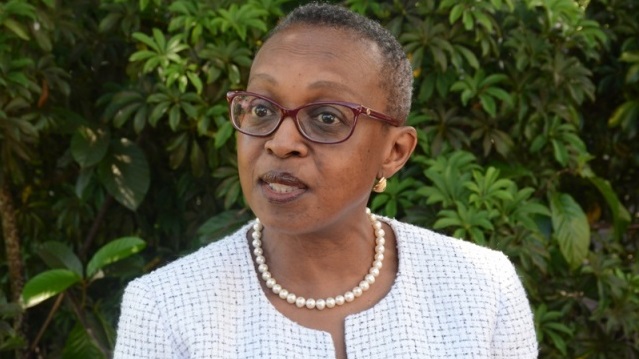 Describing the COVID-19 situation in the continent, Matshidiso Moeti, WHO's regional director for Africa, termed it a race against time and the virus. Photo: By Jude Morel, Seychelles News Agency CC BY 4.0, https://commons.wikimedia.org/w/index.php?curid=63006893

Nigeria, the most populous country on the continent, has recorded a total of 165,419 cases, making it the seventh most infected country in Africa. However, analysts have noted that chronic under-testing is the most likely reason for the relatively low number of cases despite the higher population, and that the real spread of infection is probably much higher.

“Nigeria, with its teeming cities, deep poverty and ramshackle health system is, from an epidemiological standpoint, a lot like India—except worse, in some aspects,” said an article in Daily Beast on Monday, adding that “the next big COVID disaster could be here.”

Kenya follows Nigeria with a total of 163,554 positive cases, as on May 9. The country had detected the particularly virulent strain of B.1.617.2 last month, a variation which has wreaked havoc in India where the health system is overwhelmed with an acute shortage of hospital beds, oxygen cylinders and essential medicine.

This strain was detected in five patients who had returned to Kenya on April 10 after attending the Kumbh Mela, a Hindu religious gathering aggressively promoted by India’s ruling far-right government led by the Bharatiya Janata Party. The gathering brought together millions of people from different northern Indian States, against all scientific advice.

By Sunday, this strain was also detected in South Africa. According to a statement by the country’s health department, two people from the province of Gauteng and two others from KwaZulu-Natal were found to be infected with this strain. “All cases have been isolated and managed.. and contact tracing has been performed in order to limit the spread of this variant,” the department said.

11 cases of the B.1.1.7 variant, first detected in the UK, have also been found in South Africa. Eight of these have been recorded in Western Cape, two in Gauteng, and one in KwaZulu-Natal. This variant has been “detected in community samples and.. therefore suggests that the community transmission of B.1.1.7 has already set in,” as per the health department‘s statement.

These two strains have further complicated COVID-19 management in South Africa and the rest of the continent, where the B.1.351 strain has been prevalent.

“The tragedy in India does not have to happen here in Africa, but we must all be on the highest possible alert,” cautioned Matshidiso Moeti, WHO’s regional director for Africa, on May 6.

While the case-curve in Africa has plateaued in the last few weeks, the WHO has warned of the possibility of a “third wave” on the continent due to the new variants. “It’s a race against time and the virus. Given the limited supply, we recommend that countries prioritize giving the first dose to as many high-risk people as possible in the shortest amount of time,” Moeti said.

Despite being the second-most populous continent on the globe – accounting for 17.21% of the world population – the vaccination rate in Africa is the lowest in the world and has been further declining. According to the WHO, Africa currently accounts “for only 1% of the vaccines administered worldwide, down from 2% a few weeks ago.”

With the situation in India deteriorating, the Serum Institute of India stopped making vaccine deliveries to Africa last month, causing a shortfall of 140 million vaccines on the continent.

Much hope has now been invested in the possibility of expansion of access to COVID-19 vaccines following the US government’s decision to concede, under enormous pressure, to a limited waiver on Trade-Related Intellectual Property Rights-related provisions of the WTO in connection with the vaccine. A much more elaborate proposal to the same effect had been made by India and South Africa last year.

Moeti claimed that it “could mark a game-changer for Africa, unlocking millions more doses and saving countless more lives.” Some analysts have however pointed out that the struggle of developing countries against the IPR regime backed and defended by major pharmaceutical companies and Western states, led by the US, may not yet be over. This is due to the fact that for the waiver to come into effect, there has to be a consensus among all 164 members of the WTO.

In fact, the statement released by ambassador Katherine Tai from the Office of US Trade Representative says that the US “will actively participate in text-based negotiations at the World Trade Organization (WTO),” and adds that “those negotiations will take time given the consensus-based nature of the institution and the complexity of the issues involved.” If the US drags its feet in these negotiations, countless more lives will be at stake.