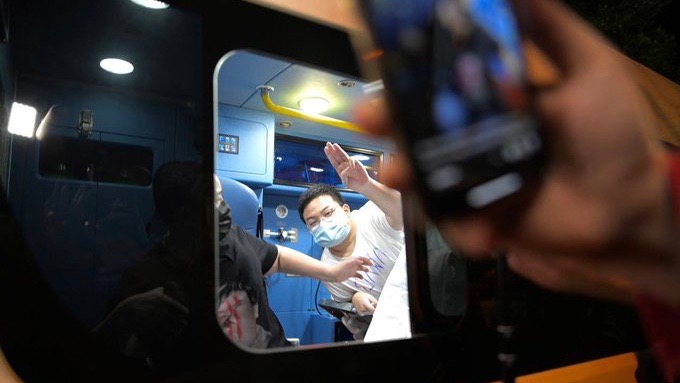 Student activist, Parit “Penguin” Chirawak, being released from the hospital of the correctional facility where he was held. Parit has been on a hunger demanding the release of political detainees for 58 days. Photo: iLawFX/Twitter

Three Thai activists detained under charges of lese majeste have been released on bail following weeks of protests by civil society organizations and rights groups. On Tuesday, May 11, the Criminal Court in Bangkok, granted bail to Parit “Penguin” Chirawak and Chaiamorn Kaewwiboonpan, while a regional appeals court granted conditional bail to Phromsorn ‘Fah’ Weerathamjaree.

The bail hearing for another activist, Panupong Jadnok, was postponed by the Bangkok Criminal Court pending a COVID-19 test. The trio were the latest political prisoners to be released after Panusaya Sithijirawattanakul was granted bail on May 6, Wanwalee Thammasattaya and Hathairat Kaewseekram on May 7 and Siraphop Phumphuengphut on May 9.

All the released activists were granted bail under hefty bonds and the condition that they shall not participate in “activities that disrupt society.” Of them, Phromsorn is also required to wear an electronic monitoring bracelet.

The released activists were welcomed by their families and demonstrations by their supporters. Ahead of the release, human rights advocates, supporters, media persons and even former detainees like Panusaya waited outside the special prison in Bangkok, where they had been held.

Among the activists who were released on bail, Phromsorn, Parit and Panusaya had been on prolonged hunger strikes demanding the release of all political detainees. The jailed activists were also facing charges such as cybercrimes and sedition.

Most of the detainees were arrested during a massive crackdown on activists and protesters by Thai authorities between January and March. Parit, for instance, was in jail for 92 days in total, and on hunger strike for 58 days. Phromsorn was under detention from March 17. He was taken into custody just two days after suffering a serious injury in a traffic accident.

On his release, Phromsorn expressed his happiness, while also stating that he doesn’t “want any parent to suffer any illness or stress or pressure over their children coming out to speak the truth and expressing their politics.”

“I was inside but what I know for sure is that the people outside have suffered severely. We have run into these problems time and time again with our country having a government unable to administer anything.”

Earlier this month, on May 2, Parit was hospitalised by prison officials in Bangkok after his health deteriorated very fast and prison medical staff feared a saline-induced shock. Details of the hospitalisation were clandestine and sparked demonstrations and mobilization demanding their release.

With inputs from Prachatai, Thai Lawyers for Human Rights and iLaw