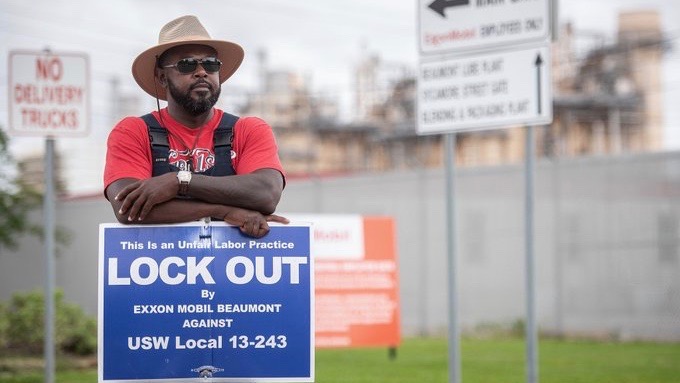 Workers continue to show up to work at ExxonMobil's Beaumont plant, only to be turned back, since May 1. The USW has filed an unfair labor practices (ULP) lawsuit against the lockout. Photo: USW/Twitter

Over 650 workers at an oil refinery in Beaumont, Texas, are still out of job a month after ExxonMobil Corporation announced a mass lockout of unionized workers. On May 1, the company initiated a lockout of workers after the union refused to hold a vote on its contract offer.

The company refused to concede to any of the demands made by the United Steelworkers’ (USW) local chapter District 13-243, which represents the workers in the negotiations for the new contract. ExxonMobil also replaced union workers with temporary unskilled workers in what the USW has deemed to be a clear attempt at union-busting.

Both the union and the company had given a 75-day notice to each other of either a strike or a lock-out, if negotiations failed to materialize a contract before the expiration of the previous contract on May 1. The union made attempts to avoid complete shutdown. The company stuck to the proposal it had tabled to the negotiating team on April 20, the USW tried to keep the negotiations going by offering a one-year contract extension to avoid the lockout, which ExxonMobil refused.

Since the lockout has been in place, wages and non-wage benefits have been frozen, with looming uncertainty over the future of the workers in the refinery. ExxonMobil’s Beaumont refinery is among the biggest in the country, and is expected to be the largest this year, with an expected capacity addition of 250,000 barrels of crude oil a day to the existing 390,000 barrels a day right now. Moreover, the company has also raked in close to USD 2.7 billion in the first quarter of 2021 alone.

Workers have filed an unfair labor practices (ULP) lawsuit with the National Labor Relations Board (NLRB), the federal labor watchdog in the US, against the lockout and the company’s continued refusal to negotiate for a better contract. USW unions from various ExxonMobil facilities across Texas have also undertaken campaigns for more transparency and greater accountability from ExxonMobil.

A rally was undertaken by members of USW District 13-243 at the company’s head office in Irving, Texas, during the annual shareholders’ meeting on May 26. The Beaumont workers were joined by workers of other ExxonMobil facilities in Baytown and Dallas, Texas.

“We won’t let ExxonMobil starve workers into accepting concessions that will undermine safety, job security and seniority rights,” said Ruben Garza, director of USW District 13. “Executives, directors and shareholders need to know that the USW will hold the company accountable for its violations of federal labor law.”

“We are firmly committed to fighting ExxonMobil’s attempts to divide workers and break our union. We remain united in solidarity for a fair contract in Beaumont despite the company’s choice to plan, orchestrate and execute this unfair labor practice lockout,” Garza added.

In a key victory to the united workers’ campaign in the meeting, USW also led the shareholders’ into endorsing a resolution that has pushed the company to disclose details of the lobbying groups and campaigns it has supported recently.

Union members have recently accused the company of supporting several anti-workers lobbying groups, including those that go completely against its stated principles and objectives to shareholders. The USW delegate called out ExxonMobil for supporting the Western States Petroleum Association which is currently a party in a legal challenge to California state’s program to upgrade safety within oil refineries.

“Shareholders face a dark money blind spot when the company fails to disclose its trade association payments used for lobbying, especially when these lobbying efforts contradict with ExxonMobil’s public position,” said Ricky Brooks, the USW delegate who tabled the resolution at the meeting.

As pressure continues to mount across ExxonMobil facilities on various fronts, workers at the Beaumont workers continue their struggle for fair wages and job security.