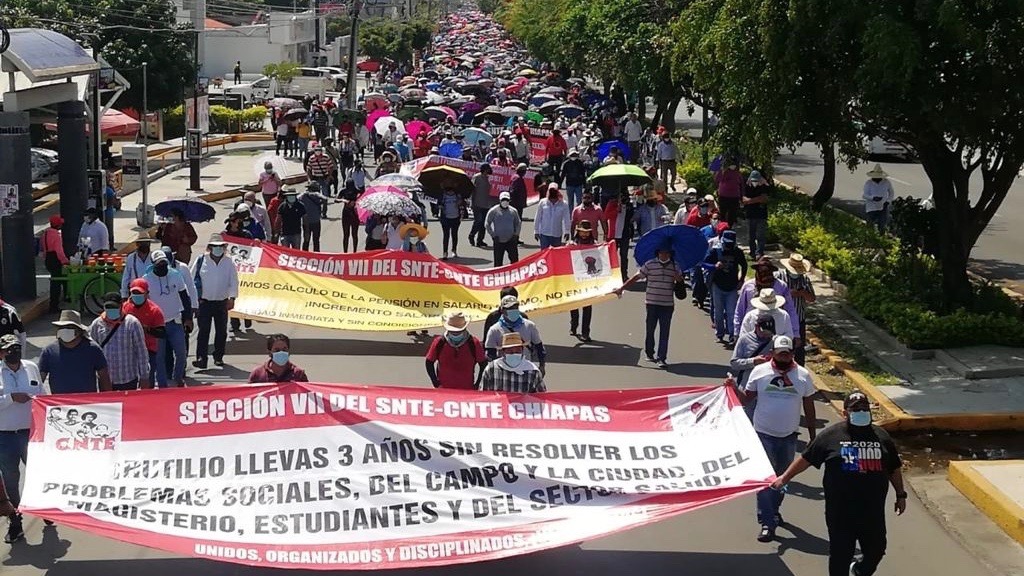 Thousands of teachers, students and parents took to the streets of the Tuxtla Gutiérrez city in the Chiapas state of Mexico, on June 1, to demand the immediate release of the 19 detained students of the Mactumactzá Rural Teachers’ College. Photo: CNTE

The 17 students of the Mactumactzá Rural Teachers’ College and 2 young Indigenous men, who were imprisoned in the El Amate prison in Tuxtla Gutiérrez, Chiapas since May 18, were released on parole on June 2. They were arrested during a protest demanding fairer conditions in holding the entrance exam for the new academic session.

The parents, students and teachers associated with the section 7 of the National Union of Education Workers (SNTE), a part of the National Coordinator of Education Workers (CNTE), and representatives of the displaced Tzotzil Indigenous people from the Chenalhó municipality, were on the streets since their detention demanding their freedom. They are now calling for their unconditional release. They are also demanding the installation of a dialogue table with President Andrés Manuel López Obrador and governor of Chiapas Rutilio Escandón Cadenas to discuss all their requests. They have announced that they will continue to hold the indefinite sit-in at the central park of Tuxtla Gutiérrez, which began the same day, until the federal and state authorities respond to their demands.

What happened on May 18?

On May 18, over 200 students from the Mactumactzá College peacefully protested in Tuxtla Gutiérrez demanding the entrance exam be held in-person to guarantee access to higher education for all students, highlighting that a large part of the population does not have access to the internet.

What happened in the aftermath?

Following their detention, the struggle to get them released began and became one of the main agendas of the recent wave of teachers’ protests in Mexico.

On June 1, in the Tuxtla Gutiérrez city, thousands of teachers from section 7 of the SNTE, students and parents marched from the Huntress Diana Fountain to Central Park demanding the immediate release of the 19 students as well as in rejection of the police repression against the students of the Mactumactzá College on May 31. On Monday, over 600 members of the Chiapas state police repressed students protesting in the city to demand the release of their fellow students with tear gas and rubber bullets.

On June 1, in the capital Mexico City, the teachers associated with the CNTE demonstrated in front of the National Palace demanding an end to violence against the students of the Mactumactzá College and a solution to their claims.

On June 2, the members of the trade union continued with their protest actions. In Tuxtla Gutiérrez, the demonstration was held at the central park and an indefinite sit-in began. In Mexico City, a massive march was carried out from the Angel of Independence monument to the main square. The demonstrators at both the protests condemned the repression and arrest of more than 30 students of the Carmen Serdán Rural Teachers’ College in Puebla state, and demanded the cessation of “all acts of repression” against the students. The students of the Carmen Serdán College, on June 1, had organized a sit-in in front of the Aguayo House, state government’s office, to demand educational improvements and clarification on the deaths of two of their fellow students.

“The state police deploys its forces disproportionately on the students trying to silence their protests for the freedom of their classmates. Meanwhile the channels of dialogue are closed. (…) It is regrettable that the judicial route is privileged to solve an educational problem and that police repression is used as a way of solving an educational problem and that it is part of the human right to education of Indigenous youth of the Mactumactzá College,” the parents said in a statement.

Omar García, one of the survivors of the Ayotzinapa case, through a tweet on June 1, explained the Rural Teachers’ Colleges, known for their leftist activism, have been targeted time and again by different governments. He stated that “in 2003, the federal and state governments of Hidalgo and Chiapas tried to close two rural teachers’ colleges: the Mexe in Hidalgo and Mactumactzá in Chiapas. It was done to end rural colleges, a type of institute that causes a lot of headaches for the governments in power because they have a very critical and questioning spirit often in opposition to the authorities and because they are organized.” García added that “presently in Chiapas, the Rural Teachers’ College of Mactumactzá, which was not completely closed in 2003, is now fighting for admission, like every year hundreds of rural students do. This is what is being strongly persecuted and repressed.”

It is important to note that the 43 students from Ayotzinapa Rural Teachers’ College, who disappeared in 2014, were actively protesting against the educational reform proposed by the former government of President Enrique Peña Nieto in 2013.

Why are Mexican teachers in the streets?

Teachers across Mexico are mobilizing in rejection of resumption of in-person classes from June 7. They have announced that due to the lack of adequate sanitary conditions or infrastructure in the schools, there are no conditions to reopen schools.

Pedro Hernández, the secretary general of Section 9 of the CNTE, in a press conference on June 1 said that “it is not possible in this short term to return to in-person classes. The teachers of Section 9 reject the return to classes on June 7, and demand that basic needs be met in the schools. Education has not stopped in the country, teachers continue to teach classes via the internet. You have to properly prepare for going back to school.” Hernández reported that they have consulted with parents and that they have also rejected returning to school, since they agree that there are still no conditions to resume schools safely.

The CNTE has asked the educational authorities and state governments to ensure vaccination for the entire population, monthly provision of hygiene and cleaning items for the entire educational population, guarantee drinking water and electricity in each school, presence of medical personnel in each school, comprehensive review of school buildings, rehabilitation and building of toilets and sinks, guarantee of internet connectivity and sufficient computer equipment, among other important measures.

The protests are also being held to demand the reinstallation of the national dialogue table between the CNTE and the national government, which was suspended in December 2020. In this possible dialogue, the teachers’ union will demand the suspension of the educational reform imposed by Nieto’s government, and that pensions be estimated according to the current minimum wage.

The CNTE has announced that its members will continue to mobilize until the negotiation table is reestablished. 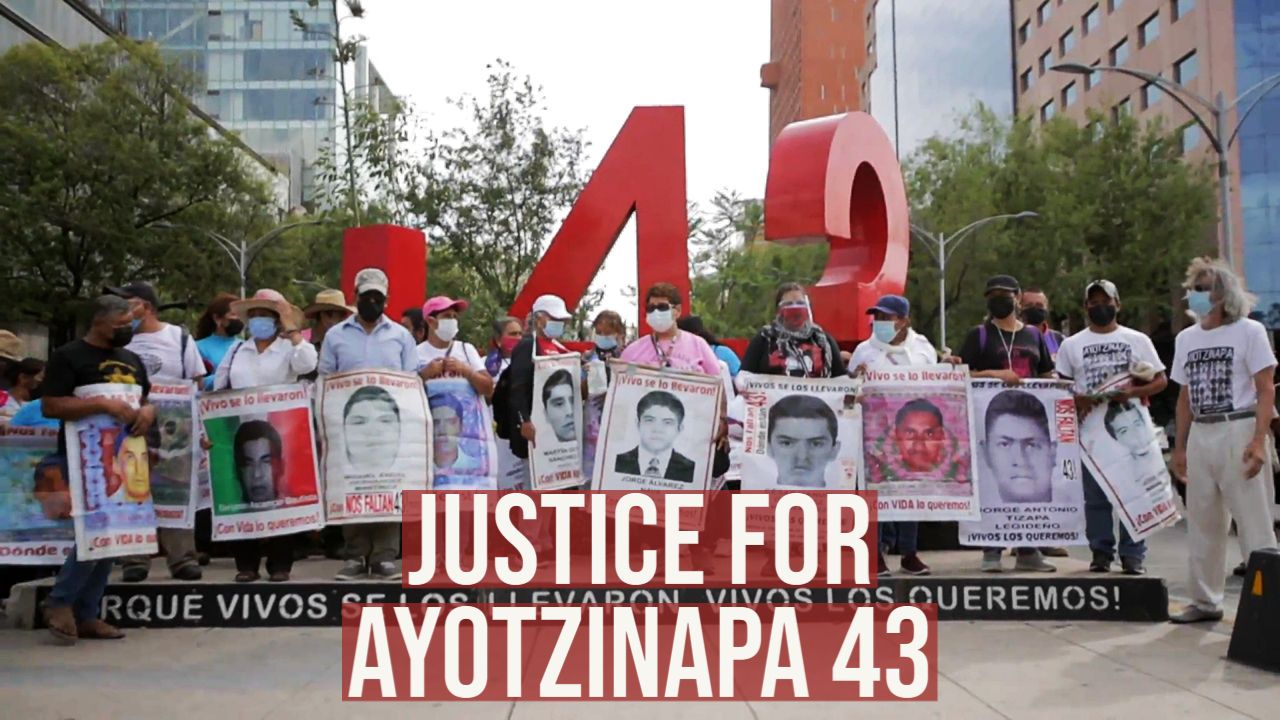 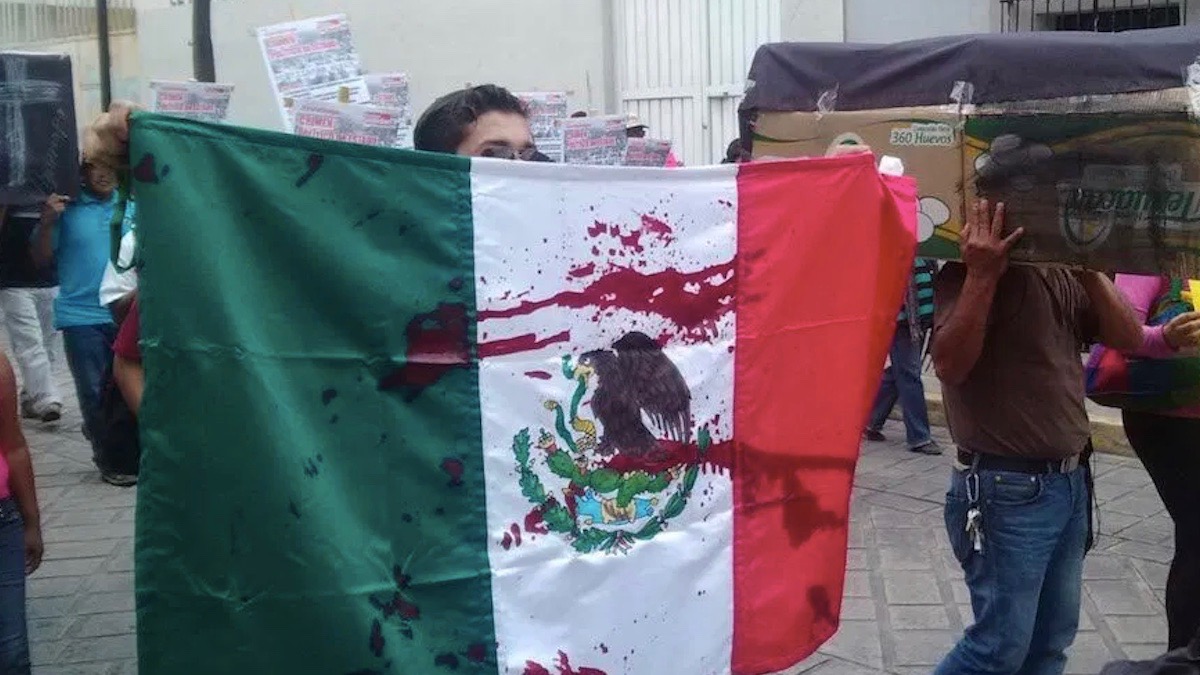