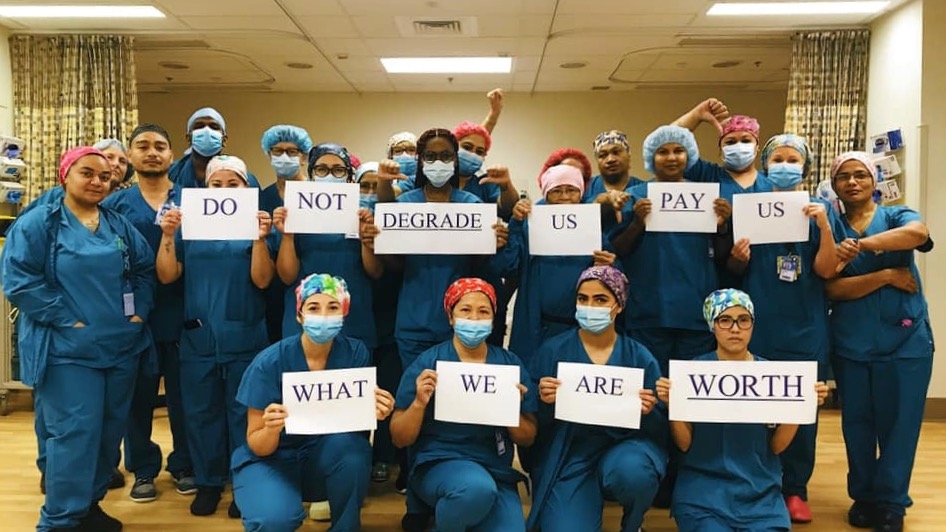 In a vote held on Monday, June 7, thousands of nurses across New Zealand voted to “overwhelmingly” reject the latest pay offer by the District Health Boards (DHBs). Over 30,000 nurses organized by the New Zealand Nurses Organisation (NZNO) in public hospitals and facilities managed by the country’s 20 government-run DHBs will sit on an eight-hour strike on June 9. The strike was called last month by nurses, midwives and aged care workers, among others, to protest low wage rates and understaffing of public hospitals.

Announcing the results of the vote, NZNO lead advocate David Wait said in a statement that “We need the Government and the DHBs to come up with a profession-enhancing offer right now that truly recognizes the contribution nursing staff make and that ensures the future of nursing for the wellbeing and safety of us all.”

In the statement, Wait stated that union members are suffering from serious shortages of workforce, partly because of low pay rates that do not attract or retain people in the nursing profession. The low levels of staffing, he argued, “stretch them to breaking point, putting them and their patients at risk.”

The latest pay offer proposed by the DHBs on May 27 is the third such offer made this year, the other two being on February 24 and March 25. The May 27 package was a revision of the March 25 proposal and included a lump sum of NZD 4,000 (approximately USD 2,900).

The original proposal had only offered an annual pay increase of 1.38% – not only far short of the original demand of 17% tabled by the NZNO, but also below the annual inflation rate of around 1.7% for 2020. For hospital-based midwives, the pay hike rate offered is at 1.25%, which again falls far short of the expected raise.

The only difference in the revised proposal was the lump sum payment, which would be a partial payment of the back pay owed to workers through their ongoing pay equity claims to be settled by the end of the year.

Wait further stated that the new offer neither “significantly changed” nor adequately addressed these issues. “Our members are genuinely concerned that nursing shortages would increase if it was accepted, and that standards of care for all in Aotearoa New Zealand would suffer as a result,” he said.

“Nobody wants (the strike) and the best way for future strikes to be avoided would be through a fair and decent offer,” he added.

The strike will be held between 11 am and 7 pm on Wednesday and will affect almost every service with the exception of life-saving and emergency services. The DHBs and the government expect to resume negotiations with the NZNO but the union has not ruled out further strike actions.

Nurses and public health workers in New Zealand have been involved in a multi-pronged struggle for fair wages and safe work environments, and have been resisting an incoming austerity. Even as NZNO was negotiating wage rates with the DHBs, in May, the government of prime minister Jacinda Ardern indicated a wage freeze for the next three years on the pretext of the pandemic-induced economic recession.

The union has also complained that the proposals so far have not properly addressed the demand for safe staffing. The union argues that the low wage rates often discourage people from opting for nursing as a profession or to leave for Australia or other nations for higher wages. In a statement released in December, NZNO reported 250 unsafe staffing incidents in the three previous months in the Auckland region alone.

Understaffing particularly affects the aged care sector, where both low wages and low hiring by private aged home facilities is enabled by almost no regulation for minimum staffing.

The Ardern government received praise from around the world for the effective containment of the COVID-19 outbreak in the country. So far, New Zealand has reported  only around 2,300 infections and 26 fatalities, among the lowest in the world.

However, nurses have complained of being neglected and undervalued by the government. NZNO has been negotiating for a better wage plan and ways to deal with the severe staffing issues in New Zealand’s hospitals for months but a satisfactory deal is yet to materialize.