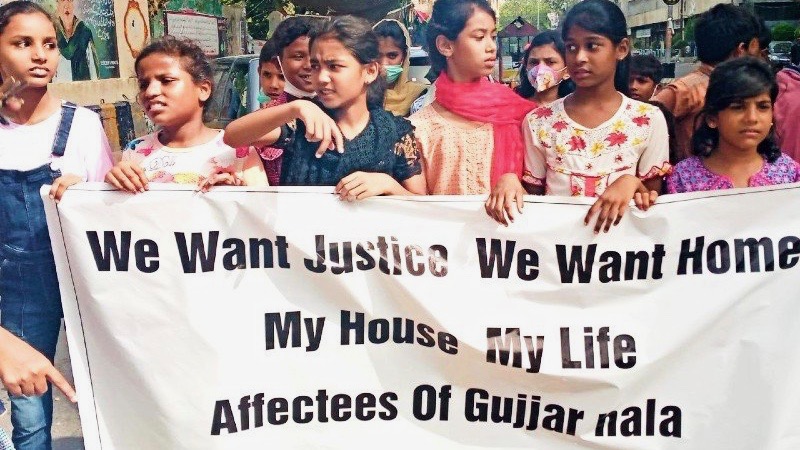 Dozens staged a protest outside the Press Club in Karachi, Pakistan, on Sunday, June 13, to call for the chief justice of the Supreme Court to uphold the stay orders issued against demolitions planned as part of an anti-encroachment drive along the city’s Gujjar and Orangi nullah (drain) areas.

On Monday, June 14, while hearing the petition filed by Karachi Metropolitan Corporation on the demolition of leased houses along Gujjar nullah, the apex court noted that encroachments need to be removed. The court said that the authorities should continue the anti-encroachment drive along stormwater drains. According to the Karachi Bachao Tehreek, there is a second hearing scheduled for Wednesday June 16.

The Supreme Court did not rule in favour of the poor who will be rendered homeless if the demolitions are ordered. Affectees are protesting outside the SC.#SupremeCourtStopDemolitions #HousingforAll pic.twitter.com/yhXmK01KHb

Soon after the August 2020 urban flooding in Karachi, the Sindh State government had announced the decision to remove illegal structures around these drains. Last year’s flooding in the city had broken an 89-year-old record and killed at least 40 people. The government alleges that the residential construction  a contributing factor.

However, the key issue behind the demolition drive and opposition to the same is access to safe and accessible housing. The residents of Kausar Niazi Colony, where demolitions have been carried out, claim that most of the people living in the area are daily-wagers. Locals complain that the government in 2005 had called to regularize this colony through a resolution from the council hall, after which a number of workers bought modest accommodations as small as 60-square-yard after following due process.

As per estimates, at least 21,000 children will be affected in the planned demolition drive. On Sunday, scores of affected children, some as young as six-year-old, were seen holding placards highlighting the growing “humanitarian crisis” in Karachi. One poster read: “Mr Chief Justice, we had gone to school when our home was destroyed. Where will we live now – we want justice?”

Talking about the demolitions, 11-year-old Arbaz who was part of the protest said: “I had no idea what happened to my home when I came from school in the afternoon. I found my mother sitting near the debris of our demolished house, crying profusely.”

Head of the Gujjar Nullah Affectees’ Committee, Abid Asghar, claims that the majority of the settlement are at a distance from the drain “And the structures were as old as this country. This settlement has been there for decades.”

In 2016, the government demolished some of the houses which were in close proximity to the Gujjar nullah. Those who were dispossessed of their homes have still not been rehabilitated or received any compensation from the authorities.

Locals feel apprehensive that those whose houses are dismantled in the ongoing drive will also face a similar situation. Gujjar nullah is hope to many minority communities, including a sizeable Bengali community, making them even more vulnerable. A large number of locals, supported by rights groups, had formed a human chain protesting against illegal evictions in Gujjar and Orangi nulla in May.

Questioning the rationale behind the court’s decision, the head of the Orangi Nullah Affectees Committee, Arsalan Ghani, said that often the strictest laws are invoked against the marginalized: “By demolishing only working-class neighborhoods the state is not only showing its class-character but is also creating a humanitarian crisis, affecting around 100,000 people and rendering over 21,000 children homeless,” Ghani said.