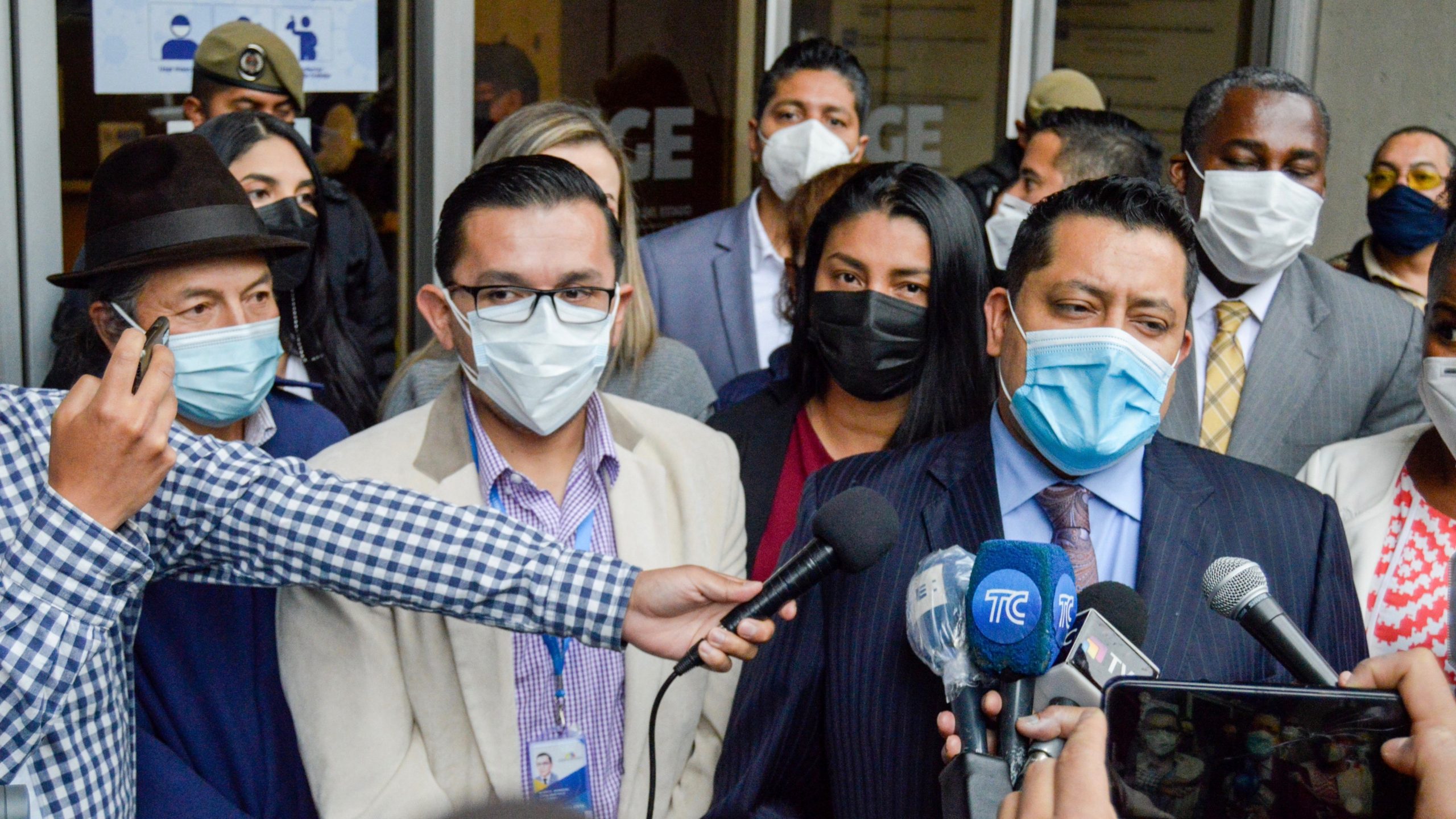 Ecuadorian legislator Fausto Jarrín Terán, along with other legislators of the progressive Union for Hope (UNES) alliance, outside the State Attorney General’s Office on June 14. Photo: Blasco Luna/Twitter

Ecuadorian lawyer and legislator Fausto Jarrín Terán, on June 14, filed a complaint with the State Attorney General’s Office to investigate the alleged supply of weapons by the government of former President Lenín Moreno to the Bolivian coup regime of Jeanine Áñez in November 2019. Jarrín Terán, along with over a dozen other legislators of the progressive Union for Hope (UNES) alliance, demanded the truth about the accusations from Bolivia and justice for the victims repressed with the supplied weapons.

“We have come to the State Attorney General’s Office to file the complaint corresponding to the fact that they handed over, without any reason or justification, military equipment, tear-gas bombs and pellets to the de-facto government of Jeanine Áñez in November 2019, with which, obviously and clearly, the de-facto government repressed the citizens in the sister country Bolivia, just like (former government) minister (María Paula) Romo repressed the citizens in Ecuador in October 2019. We have denounced these facts,” Jarrín Terán told the media outside the Attorney General’s Office.

Jarrín Terán added that they will work jointly with the Bolivian authorities and urged the newly elected government and the state institutions to support the investigation. “We demand that the Attorney General’s Office act with the diligence that this type of situation represents. We hope that the government of President Guillermo Lasso will be inaugurated with the possibility that his new authorities will open the necessary investigations. The police, the government ministry and all other state institutions should open their offices so that the Attorney General’s Office can carry out an appropriate investigation required for such a serious case,” stressed the legislator.

Earlier on June 14, in a statement shared on his twitter account, Jarrín Terán demanded that former President Lenín Moreno and former government minister María Paula Romo be investigated for their “participation in the coup d’état in the sister Republic of Bolivia.”

According to an official letter from the Ministry of Government of Ecuador, released by the Bolivian government press agency Agencia Boliviana de Información (ABI) last week, Moreno’s administration lent Áñez’s regime 5,500 grenades and 2,949 projectiles in November 2019. In the letter, dated May 27, 2020, the Ecuadorian police general commander, Hernán Patricio Carrillo Rosero, requested the then defense attache of Bolivian embassy in Ecuador, José Luis Frías, to coordinate the return of the equipment delivered by Ecuador to Bolivia as a loan in 2019. The letter further added that the Ecuadorian government appointed Fernando Correa Gordillo, the National Director of Logistics, for coordination tasks.

The information and the letter surfaced during the investigation of the tear gas corruption case in Bolivia. It is the same case in which Áñez’s government minister Arturo Murillo was arrested in the United States on charges of bribery and money laundering in the month of May and is a fugitive from Bolivian justice.

In the US, Murillo and his former chief of staff Sergio Méndez are accused of receiving bribes paid by a US company and individuals to secure a Bolivian government contract, and using the US financial system to launder those bribes.

In Bolivia, Murillo, along with former defense minister Fernando López, is being investigated for the crime of embezzlement of public funds, related to the purchase of tear gas at a massively inflated price. The coup regime paid 5.6 million USD to acquire the tear gas having a value of 3.3 million USD, from Brazilian company, Cóndor, through the US-based intermediary company, Bravo Tactical Solutions, and the surcharge of 2.3 million USD was pocketed by the regime officials.

According to the investigation by Bolivian authorities, Murillo, through the defense ministry, got tear gas and different types of projectiles on loan from Ecuador to provide the Bolivian police with supplies to suppress the anti-coup and pro-democracy mobilizations that broke out in the country following the coup d’état against former President Evo Morales. The loan was agreed when Murillo was arranging to acquire the tear gas from Cóndor.

Former President Morales regretted the involvement of his Ecuadorian counterpart in the coup against him as well as in the repressive actions including the unfortunate massacres. “It is lamentable that the government of Lenín Moreno, former president of Ecuador, is implicated in the massacres caused by the de-facto government in Sacaba, Senkata and Pedregal. Having lent grenades and projectiles to the coup plotters shows this,” he wrote in a tweet.

The international human rights organizations such as the Inter-American Commission on Human Rights (IACHR) and the UN verified that 37 people lost their lives and hundreds were gravely injured in different regions of the country during various violent repression operations by security forces after Áñez assumed power.

On June 14, the Attorney General of Bolivia Wilfredo Chávez reported that the country will arrange for Murillo’s extradition. “Once he is convicted and serves his sentence there, we will be able to activate the extradition procedure that is being prosecuted within our country,” said Chávez in an interview with Canal Bolivia TV.

Chávez also reported that the country is working to begin a civil trial to recover the millions of USD stolen by Murillo. Chávez informed that for this purpose the authorities are already coordinating with the lawyers who are managing the case in the United States. “It is a case of recovery of assets for the economic damage due to the tear gas case. We passed the information to the law firm (Greenberg Traurig) to recover the surcharge,” he said.

Chávez stressed that “we will quantify the damage caused because it is not like any other damage, since it was negotiated in the COVID-19 pandemic, when the country needed those resources to save lives, so we have to see the additional amount.”

On June 15, Bolivian Justice Minister Iván Lima called to prosecute Áñez and Moreno for the crime against humanity for using “the weapons against the Bolivian people.”

Áñez is in prison being held in preventive detention. She was arrested on March 13 for her involvement in the coup against Morales. She has been charged with the crimes of terrorism, sedition and conspiracy. The Attorney General’s Office is also investigating her for breach of duties and unconstitutional seizure of power, among various others related to corruption cases, massacres, incidents of violence and human right violations committed during her one year in office.

On June 15, the Attorney General’s Office called opposition leader and former presidential candidate of the Citizen Community party Carlos Mesa to testify about his role in the coup of 2019. The summon follows the statement given by Áñez that implicates him in her illegal seizure of power. If he fails to appear for questioning, an arrest order will be issued against him. 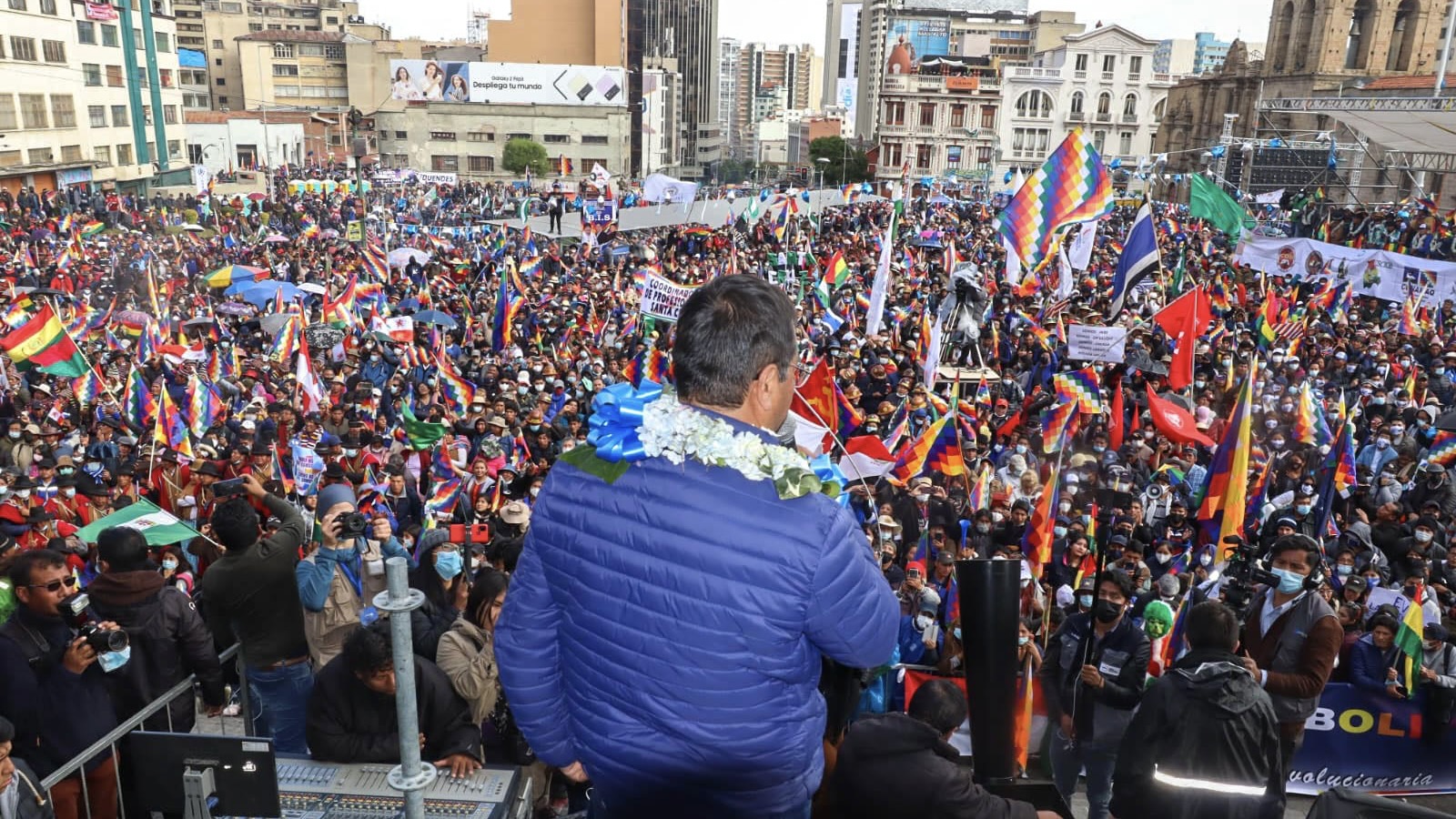 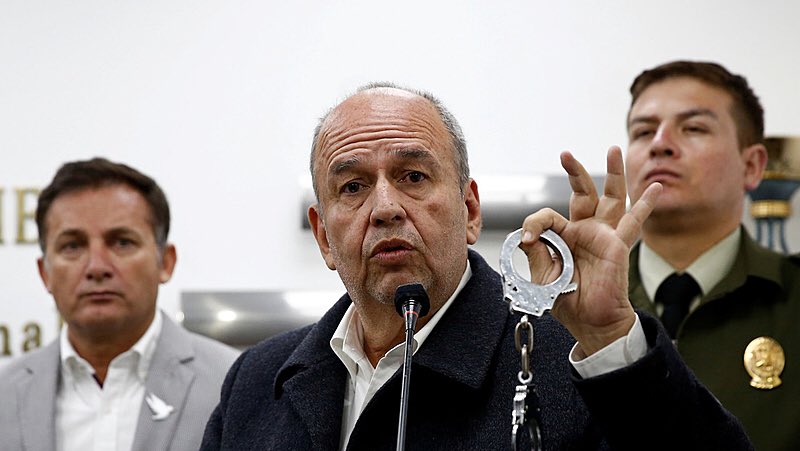