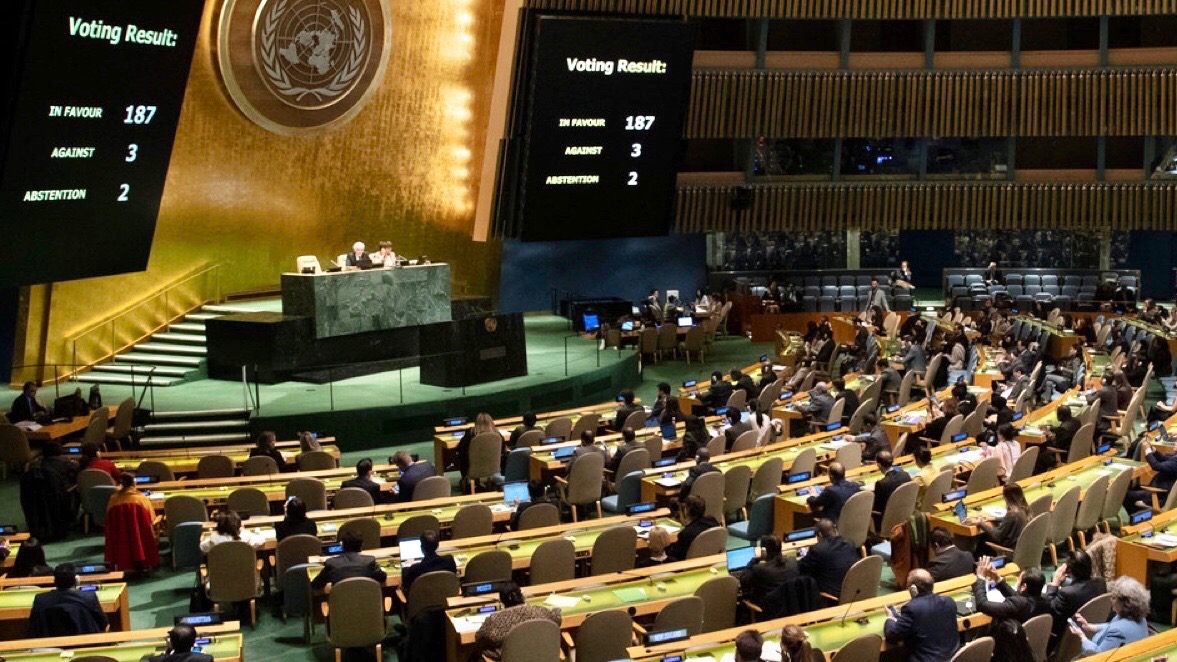 In 2019, in the last vote on the resolution in the UN General Assembly, 187 of the 191 countries voted in favor of lifting the 60-year-long US blockade on Cuba. Photo: Miguel Diaz Canel/Twitter

Today, on June 23, the United Nations General Assembly will vote, for the 29th time, on the resolution the “Necessity of ending the economic, commercial and financial blockade imposed by the United States of America against Cuba.”

Every year since 1992, the Cuban government has presented a non-binding resolution in the UN General Assembly calling for the lifting of the criminal embargo that the US imposed against Cuba in 1960. The embargo was imposed as a retaliatory measure by the US following the deepening of the socialist nature Cuban revolution led by Commander Fidel Castro and the nationalization of Cuban property, which directly threatened US capital interests. Every year since the first vote in 1992, the UN General Assembly has overwhelmingly voted in favor of condemning the prolonged unprincipled blockade and oppressive unilateral sanctions. However, the US has been systematically ignoring the request of the UN General Assembly.

These coercive measures have inflicted serious losses and have severely affected the development of the Caribbean nation and its people. Today, Cuban Foreign Minister Bruno Rodríguez will present the report on the effects of the blockade, which has intensified in the COVID-19 pandemic.

In the midst of the pandemic, when world solidarity is essential in fighting the disease, Cuba has been prevented from obtaining medicines, supplies and equipment to address the health crisis. Under former US president Donald Trump’s term, a total of 243 coercive measures were imposed on Cuba, 55 of these were imposed in 2020 alone. Despite electoral promises to reset the US relations with Cuba, the coercive measures remain intact in President Joe Biden’s administration.

According to the official reports, between April 2020 and December 2020, the blockade caused losses of 3,586.9 million USD to Cuba. These, including the losses of the previous period, amount to a total of 9,157.2 million USD (from April 2019 until December 2020). Meanwhile, the damages caused due to this policy in the past 60 years amount to 147,853 million USD at current prices. The humanitarian damage, suffering and shortages caused to Cuban families during all these years are immeasurable.

Cuban President Miguel Diaz Canel, in a thread on twitter yesterday, hailing the success of locally developed anti-COVID-19 vaccines candidates -Abdala and Soberana 02- despite harsh sanctions, saluted the nation and its people’s revolutionary spirit and expressed his faith in the world in demanding justice for the country.

“Happy and good morning Cuba! Yours is the success of Soberana 02 and Abdala. 13 months ago, I asked our scientists for a sovereign response against COVID-19. They gave not one but five answers. Two are already vaccines and we are going for more. This victory is only comparable to the size of our sacrifices. And it is a clarion of the poor of the earth, a warning of the power that resistance, unity, consecration and love for the homeland give, that Martí’s verses in Abdala have described so beautifully. This is our response to the haters, the blockers, the violent. On June 23, Cuba will return to the podium of the UN General Assembly. Let’s see who dares to deny justice to our heroic Island,” tweeted the head of the state.