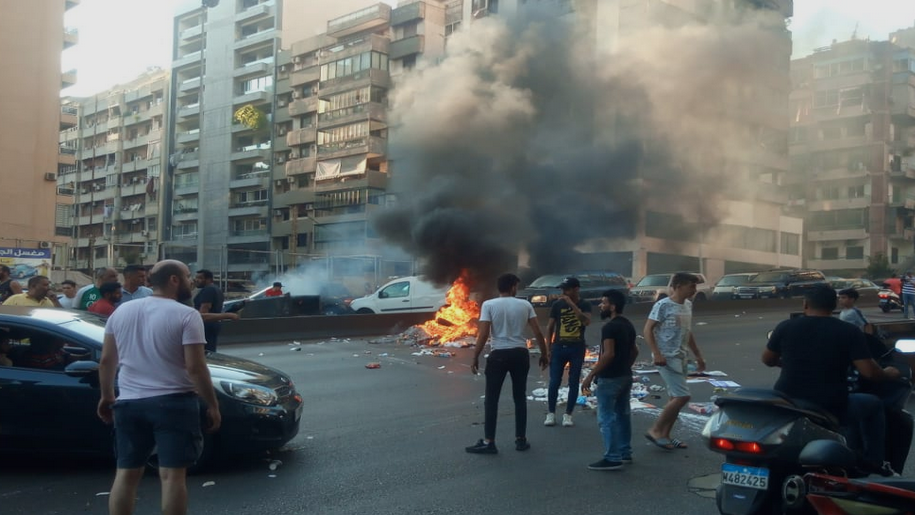 Protesters take to the streets in Lebanon on Monday. Photo: NNA

Fresh protests broke out on Monday, June 28 in Lebanon following the announcement of a possible reduction in fuel subsidy, massive hike in its prices and continued power shortage in the country. Protesters blocked the roads in capital Beirut and in other major urban centres and burnt tires.

The protest continued from the weekend when protesters were attacked in Tripoli by the security forces, injuring at least 20 people. The protests on Saturday were called following a massive 30% slide in the value of Lebanese pound vis-a-vis the US dollar.

Following the issuance of a decree last Friday to increase the exchange rate of dollars to finance the import of fuel in the country, on Monday, the central bank of Lebanon announced that it will pay 3,900 pounds instead of the official rate of 1,500 against a dollar to the fuel importers to guarantee its supply. This led to a massive hike in the prices of fuel in the country on Tuesday.

There were warnings of a catastrophic impact of the end of subsidies in Lebanon at the moment. People already suffering from rising poverty and prices of essential commodities see it as yet another assault on their living conditions and fear its long term effect.

Long term implications: Financial exclusion; energy exclusion; food insecurity and malnutrition; destruction of whatever remained of productive sectors; education exclusion; health exclusion.
And still some want to give them a chance!

The fall in the price of Lebanese currency in the open market to more than 18,000 pounds a dollar has worsened the import situation leading to a massive rise in the prices of essential commodities, including medicines. The fuel prices were controlled as the government used to provide universal subsidies on it and several other essential commodities.

Lebanese residents, who are facing regular power outages, rely heavily on private generators for electricity. The rise in prices of fuel, it is feared, would further lead to deterioration of power supply. Lebanon saw a huge rush on Monday at fuel stations in anticipation of rise in prices. This led to several reports of closure of fuel stations due to shortage in supplies. People also reported long hours of power cuts in the country due to the lack of fuel.

In #Lebanon now most fuel stations are closed, private generator owners are rationing diesel by turning generators off several hours a day so there's no electricity, and most shops are on strike because the LBP hit a record low of 18,000 LBP to the USD.

The government thinks that the end of subsidies will lead to more imports as the rich will pay for their services and commodities. It has planned to issue a targeted cash card program according to which close to 500,000 financially vulnerable Lebanese families will get USD 137 per month. The cash card will also be used to reduce the subsidies in other essential commodities such as wheat and medicines as well.

The government led by caretaker prime minister Hasan Diab claims that reduction in the fuel subsidies is necessary to reduce the financial burden on the government and to stop the depletion of the foreign reserves. Lebanon is facing a severe economic crisis since 2019 which has led to massive popular protests forcing the governments to resign and the World Bank and the IMF to issue warnings.

The country has been without a full time government for almost a year now. All the attempts to form a government have failed due to lack of consensus among the country’s political elite.