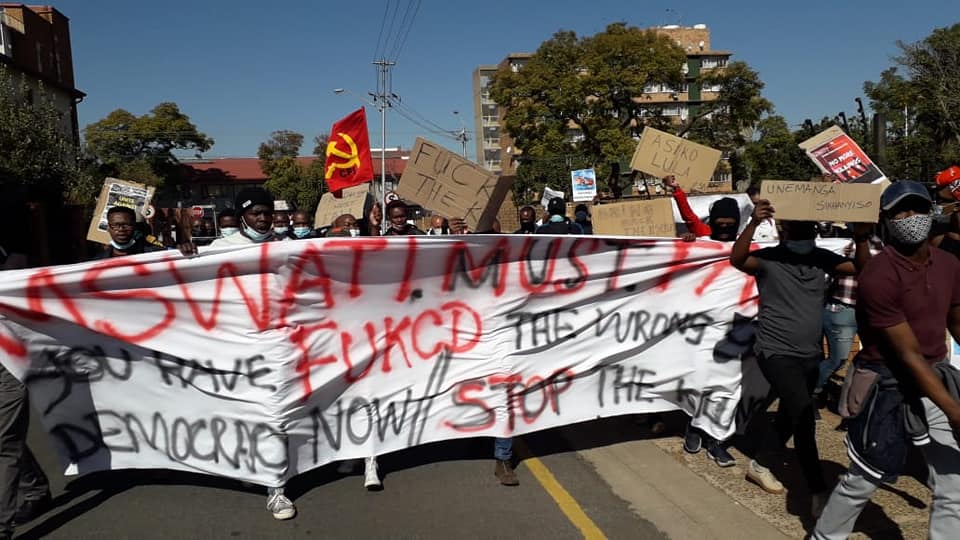 Swazis marching in Pretoria, South Africa, calling for the expulsion of the Swazi Embassy. Photo: CPS

Pro-democracy forces in Swaziland, which are enduring a crackdown by the army of absconding King Mswati, have condemned the Southern Africa Development Community (SADC) for failing to acknowledge the legitimacy of the protesters’ demands and understating atrocities committed against them by the security forces last week.

On Sunday, July 4, an SADC delegation met the government on its visit to Swaziland, but failed to hear the opposition parties which have been banned by the monarchy since 1973. The delegation was led by Mokgweetsi Masisi, the president of Botswana and the chairperson of SADC’s Organ on Politics, Defense and Security.

Two days earlier, on July 2, Masisi had issued a statement saying at least one protester was killed by the security forces. The gross understatement has outraged many political parties and civil society organizations.

On the same day that Masisi issued this statement, the Political Parties Assembly (PPA), a coalition of five political parties, had announced that it had documented the names and addresses of at least 43 protesters killed in the crackdown on the pro-democracy protests. Brian Sanghweni, the national spokesperson of the People’s United Democratic Movement (PUDEMO) which is the largest party in this coalition, told Peoples Dispatch that names and addresses of several other dead protesters are yet to be identified.

This task of verification has been slowed by the net blockade that was imposed on Tuesday, June 29. The internet shutdown was imposed after King Mswati, Africa’s last absolute monarch, fled the country on Monday June 28, reportedly after ordering the army to crush the protests against monarchy. So far, close to a thousand people have been injured, a large number of them with gunshot wounds, according to the PPA.

Most of the killings and injuries occurred on June 29 when the army opened fire on the hundreds of youth who had started attacking the properties and businesses owned by the king. The protest movement went on this offensive against the monarch, who owns much of Swaziland’s economy, after the violent police crackdown on an unprecedented wave of peaceful marches across the country to deliver petitions of demands seeking democratic reforms.

While protests and shooting were also reported on Wednesday, June 30, most areas in the country were by then brought under the army’s control, Sanghweni said. “By Thursday, most of the shops, offices and factories had been open for work. There have been no protests since, except in some remote rural areas where the army had not been deployed,” he added.

Taking advantage of this temporary retreat by the protesters, the army is allegedly continuing to break into people’s homes, and assaulting and arresting those suspected of having taken part in the protests. The PPA estimates that about 500 people have been arrested.

“The army is still roaming the streets; people are being abducted at home. Those that are lucky are dumped on the streets and those that are unlucky are collected as dead bodies,” said Lucky Lukhele, spokesperson of Swaziland Solidarity Network (SSN), after the SADC visit.

Executive Director of the Swaziland Action Group Against Abuse (SWAGAA), Nonhlanhla Dlamini, told Swaziland News that “some pregnant women have (also) been abused including young girls and most of the casualties are the youth. We…had hoped that the SADC Troika would also engage us but we are disappointed that they only managed to engage the government, leaving Non-Governmental Organizations (NGOs) outside. We have seen enough bloodshed, we really need dialogue so that the violence could end.”

‘SADC has shown a total disregard for the democratic aspirations of the people of Swaziland’: CPS

In addition to the under acknowledgment of the toll of the repressive actions, pro-democracy forces have also criticized the statement released by the chairperson of SADC’s Organ on Politics, Defense and Security, Masisi, over its condemnation of actions and positions taken by pro-democracy forces. The statement mentioned that “disturbances have resulted in widespread destruction of property, injuries to people, with at least one death reported.”

She further went on to urge “all stakeholders to channel their grievances through the established national structure”, and called on “the authorities to have an open national dialogue, in order to continue upholding the legacy of peace and stability that has characterized the people of the Kingdom of Eswatini (to which Swaziland was arbitrarily renamed by the king in 2018)”.

This rhetoric was strongly rejected by the Communist Party of Swaziland (CPS). “SADC seems to think that the terrible poverty and oppression our people live under can be categorized as ‘grievances’, which need to be ‘channeled through the appropriate national structure,’” the CPS wrote in response. They added that “the statement (of Masisi) does not even once mention the word ‘democracy’!”

By calling for a return to the “legacy of peace and stability” under the oppressive boot of the monarchy, the SADC, CPS complained, has shown a total disregard for “the democratic aspirations of the people of Swaziland”.

A day after this statement by Masisi, on July 3, the army allegedly shot another 14 people in a market area of Mashibhini, only a few kilometers from Ludzidzini Royal Residence in Lobamba city, the second capital of Swaziland. Two of them succumbed to the wounds. “One resident is fighting for his life after he was shot three times in different parts of his body,” Times of Swaziland reported.

According to CPS international organizer, Pius Vilakati, the army had opened fire at the market because an opposition leader had been present moments earlier and they allegedly thought that a protest was underway. Among the injured and dead were vendors in the market.

On July 4, while the SADC delegation met the government, two South African journalists from New Frame, Magnificent Mndebele and Cebelihle Mbuyisa, who were returning after documenting the funeral of a slain protester, were stopped by soldiers on the MH3 highway near the town of Matsapha.

They subsequently “were threatened at gunpoint, their cameras were seized and they were forced to delete important footage and photographs from the funeral, including interviews with people who had been shot and injured,” according to a statement by the progressive publication.

“Mndebele and Mbuyisa were then taken to the nearby Sigodvweni Police Station, where they were interrogated and assaulted with punches and kicks. Plastic bags were placed over their heads to suffocate them,” the publication added. “This act, sometimes described as ‘tubing’, is globally recognized as a form of torture.” They were finally released today July 5 after intervention by lawyers.

Their detention and torture was condemned in a statement by progressive news projects from across the world that expressed their solidarity with “New Frame and Mndebele and Mbuyisa who have taken risks to their personal security and safety in order to break the communication shutdown and tell the stories of those risking their lives to fight an oppressive government,” and noted that “the attacks they suffered are not isolated, and are part of the larger repressive attacks on dissent and democratic freedoms by the government in eSwatini.”

With no protests since July 1, “it is true that the pro-democracy movement has faced a temporary setback because of the army crackdown. However, people have begun to regroup. Protests will resume soon,” Vilakati said.

An anonymous call to start burning down the homes of soldiers from July 5 has been reported. “While the CPS understands the frustration of the people clandestinely issuing such calls, we discourage the people from acting on it,” Vilakati said.

“Families in Swaziland are politically divided. There are many homes in which one sibling is in the army, while the other is a member of a banned political party,” CPS cautioned, calling on the youth to instead channelize the struggle “towards recapturing the streets.”

The PPA meanwhile has called for a mass-stay away strike, urging the workers to stay home until the conditions on the streets are safe.

Despite the apathy of the SADC towards this ongoing struggle, the workers organizations in the countries that make up this economic bloc have declared their support. The Southern Africa Trade Union Coordination Council (SATUCC) – whose affiliates include 22 major federations with a total membership of over 6 million people from 14 of the 16 SADC countries – has declared “collective solidarity and support” to people of Swaziland in their campaign for “Democracy Now!”.

In a statement ahead of SADC’s visit, the organization said that “years of persecution, harassment and suppression has eventuated into a full blown crisis as SATUCC had warned over the years.”

In neighboring South Africa, the ruling ANC’s labor ally, Congress of South African Trade Unions (COSATU) held a picket at the Oshoek border gate with Swaziland on July 5, demanding the release of all political prisoners.

In Pretoria, the executive capital of South Africa, immigrant workers and students from Swaziland held a demonstration demanding the expulsion of Swaziland’s embassy, in line with the calls by the protesters for the diplomatic isolation of the country until the king yields power.

Swazis marching in Pretoria, calling for the expulsion of the Swazi Embassy. #DemocracyNow #MswatiMustFall Why nonalignment is an urgent imperative for the Global South