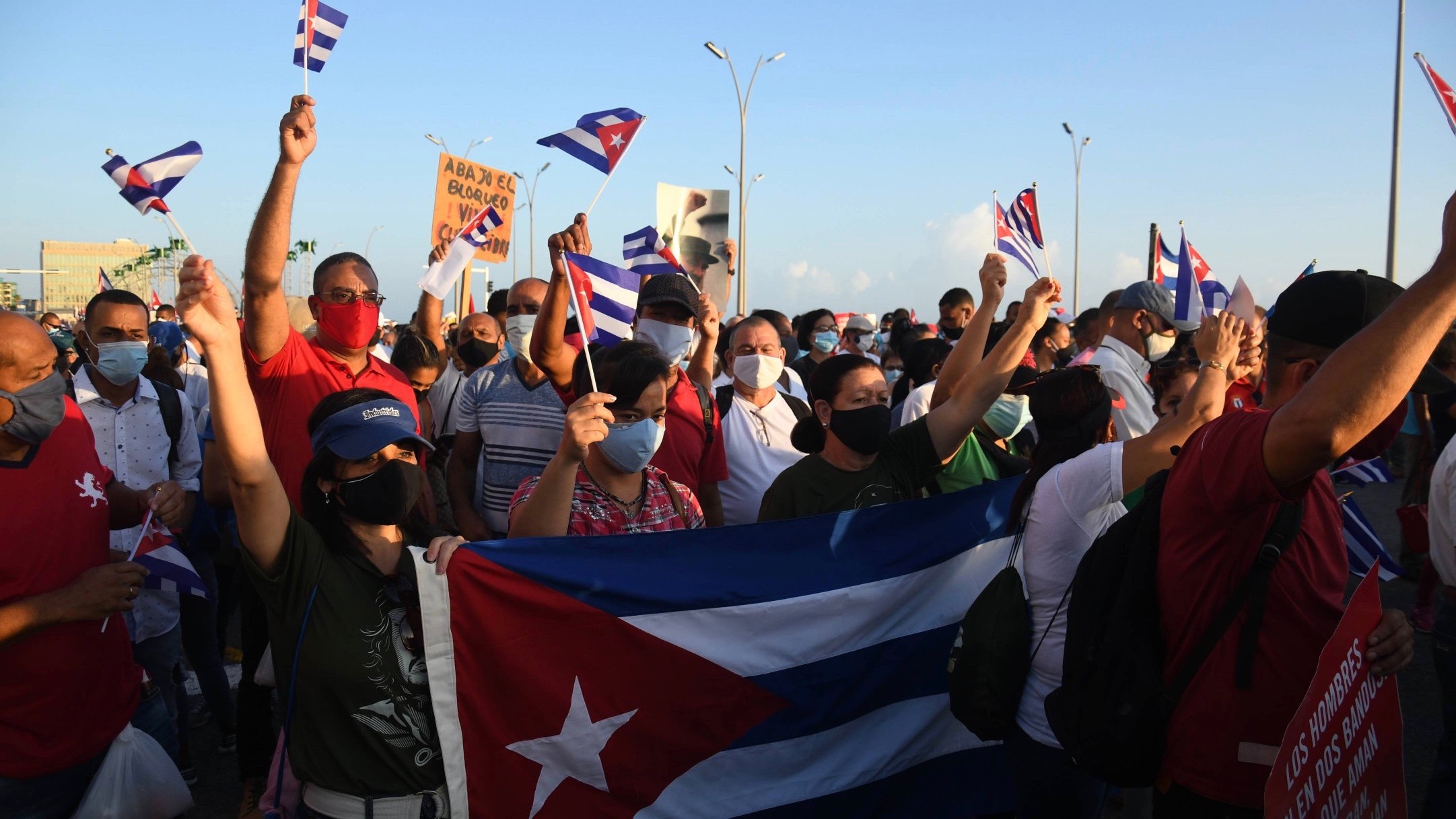 Cubans have been mobilizing over the past week in defense of the revolution and against the US blockade. Photo: Minrex

During the early morning of July 17, Johana Tablada joined tens of thousands of Cubans as they gathered along the Malecón boulevard in Havana to stand with the Cuban Revolution. “We are human beings who live, work, suffer, and struggle for a better Cuba,” she told us. “We are not bots or troll farms or anything like that.” She referred to what has been called the Bay of Tweets, a social media campaign developed in Miami, Florida, that attempted to inflame Cuba’s social problems into a political crisis.

The social problems, Tablada told us, derive from the US blockade of Cuba that began in the 1960s but has been deepened by former US President Donald Trump’s 243 coercive measures. “The United States has criminalized Cuban public services,” she said, “including our public health system and our public education system.” These sanctions make it impossible for Cubans to visit their families in the United States. They make it impossible for remittances to be sent into Cuba, and they make it impossible for Cuba to access essential goods and services (including fuel). On top of everything else, Trump designated Cuba as a “state sponsor of terrorism,” a decision which US Senator Patrick Leahy called “frivolous.” The US government claims that the blockade and these coercive measures are to punish the government, but—says Tablada—they “criminalize the country.”

Tablada keeps a close eye on the Cuban policy being shaped by Washington, D.C., and Miami, where right-wing Cuban exiles effectively drive the agenda. She does this in her role as the deputy director-general in the Cuban Foreign Ministry in charge of US affairs. There is a cast of characters in this story that is little known outside the world of US right-wing politics and the Cuban exile community. Of course, four well-known elected officials lead the attempt to overthrow the government in Cuba: Republican Senators Marco Rubio and Rick Scott of Florida, as well as Democratic Senator Bob Menendez of New Jersey and Republican Representative María Elvira Salazar of Florida. Beside them are other politicians such as Miami Mayor Francis X. Suarez and a range of Cuban American businessmen and professionals such as Emilio Braun of the Vulcan Funds and the lawyer Marcell Felipe.

These men are at the core of a set of organizations that lobby US politicians to harden the US blockade on Cuba. Felipe runs the Inspire America Foundation, which Tablada describes as the “heir to the most anti-Cuban, reactionary, and pro-[former military dictator of Cuba Fulgencio] Batista traditions from South Florida.” This foundation works with the Assembly of the Cuban Resistance—a coalition of anti-communist groups that calls for a US invasion of Cuba. At the center of these men is Mauricio Claver-Carone, a former head of the Cuba Democracy Advocates, who was Trump’s main adviser on Cuba and is now president of the Inter-American Development Bank based in Washington, D.C. Claver-Carone, Tablada tells us, “has been nothing short of the leading lobbyist of the groups acting politically against Cuba in the United States, in the US Congress, representing those entities who benefit from this policy of hatred and aggression against my country.” “If you ever mentioned [Fidel] Castro, he’d go berserk,” recalled Claver-Carone’s friend about his attitude in the 1990s.

“The main goal of these people,” Tablada said, “is to overthrow the Cuban Revolution.” Their plan for Cuba, it seems, is to revert it to the days of Batista when US corporations and gangsters ran riot on the island.

In 1960, the US State Department’s Lester Mallory wrote a memorandum on Cuba. Mallory said that most “Cubans support Castro” and there is “no effective political opposition.” Mallory said that there was only one way to go: “The only foreseeable means of alienating internal support is through disenchantment and disaffection based on economic dissatisfaction and hardship.” There has been no change in policy. The entire embargo is based on Mallory’s memorandum.

In 2019, Trump’s National Security Adviser John Bolton gave a speech to the veterans of the Bay of Pigs. He said that the US government would use every instrument to suffocate tourism to Cuba. The Trump-era coercive measures are intended to deprive Cuba of any means to conduct normal trade and commerce not only with the United States but also with other countries and firms. Sixty-three companies that sell oil do not want to challenge the US embargo, Tablada said.

The Trump policy continues into the Biden administration. “There are 22 signed agreements that Trump didn’t revoke,” Tablada told us. “They could be implemented. Today, we could’ve been cooperating against COVID. Nobody knows why Biden excluded Cuba from one of his first executive orders in which he instructed a complete review of the sanctions that hindered the capacity of states to respond to COVID-19.” In fact, on February 24, Biden signed an executive order to continue the national emergency with respect to Cuba (which prevents traffic between the countries).

While the economic stranglehold has been severe, the information war against Cuba has been equally vicious. Certainly, Cubans migrate to other countries, as the weight of the blockade is difficult to bear. But there is a higher migration rate from Central American countries and other Caribbean islands into the US, Tablada said. The US government’s embargo costs Cuba $5 billion per year, Tablada told us, while the US spends “tens of billions of dollars trying—and failing—to drive us to defeat.” There is cruelty in these policies.

Tablada considers what it would mean if Biden ended Trump’s 243 coercive measures against Cuba. As a result of the blockade, she said, Cuba produced 90 percent of its medications. It is out of this tradition that Cuba’s scientists were able to develop five COVID-19 vaccine candidates. “If Trump’s measures were lifted,” she said, “Cuba would be able to buy necessary inputs to produce medication.” In which case, Cuba’s medical internationalism would be enhanced.

“Even if Biden does nothing,” Tablada said, “we’ll still pull through. It may cost us a bit more, but we have a plan, we have a strong social consensus. None of these plans include giving up socialism. The ordinary Cuban—all of us—is capable of sacrificing our individual interests because we know that it is essential for us to have a sovereign homeland [that is]free [and] independent, and that might be as far as we go.”

Manolo De Los Santos is a researcher and a political activist. For 10 years, he worked in the organization of solidarity and education programs to challenge the United States’ regime of illegal sanctions and blockades. Based out of Cuba for many years, Manolo has worked toward building international networks of people’s movements and organizations. In 2018, he became the founding director of the People’s Forum in New York City, a movement incubator for working-class communities to build unity across historic lines of division at home and abroad. He also collaborates as a researcher with Tricontinental: Institute for Social Research and is a Globetrotter/Peoples Dispatch fellow.