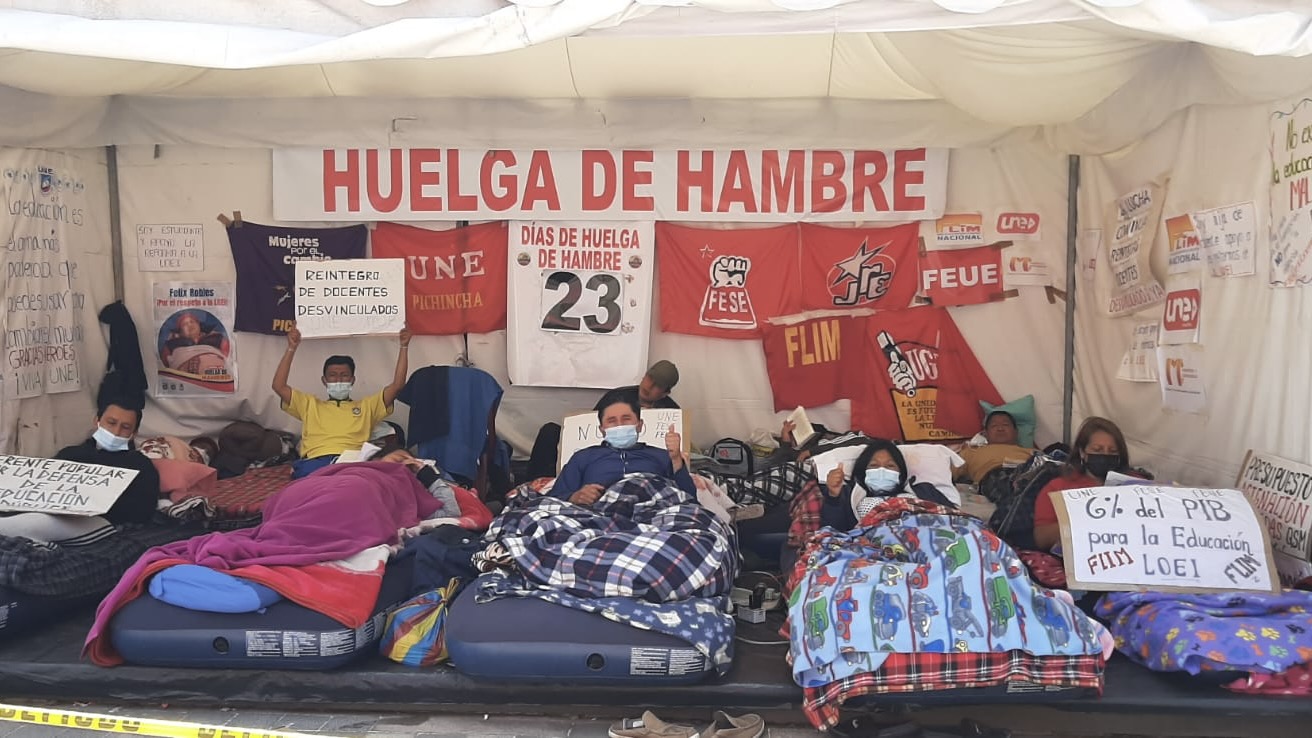 Since July 12, over 30 Ecuadorian teachers have been carrying out an indefinite hunger strike in defense of the Organic Law of Intercultural Education (LOEI). Photo: UNE/Twitter

Since July 12, over 30 Ecuadorian teachers have been carrying out an indefinite hunger strike, demanding immediate implementation of the Organic Law of Intercultural Education (LOEI). In the past three weeks, the protest measure that began in four cities of the country has expanded to eleven provinces of the country and now more than 80 teachers are on hunger strike. The strike was called for by the National Union of Educators (UNE). It has received the support of various students’ unions, social organizations and parents.

On August 2, the 22nd day of the hunger strike, several teachers, students and parents held demonstrations in different parts of the country in solidarity with the teachers on hunger strike and in defense of the LOEI. In the capital Quito, dozens of teachers protested outside the headquarters of the Ecuadorian Social Security Institute (IESS). In Guayaquil city, a group of teachers, students and parents mobilized with the union’s flag and placards highlighting their demands. Later, they protested at the National Unity Bridge and blocked it with burning tires for several hours. In the provinces of Imbabura and Manabi also, peaceful marches were held.

Despite the protest being peaceful, in Quito, the national police violently repressed the teachers holding a sit-in outside the IESS. The UNE, along with numerous other organizations, rejected the repressive response from the right-wing government of President Guillermo Lasso to their request for dialogue with the national government.

On August 3, teachers, students and parents in the cities of Cotopaxi, Tungurahua, Guayaquil, as well as in parts of the El Oro, Guayas and Pastaza provinces held mobilizations demanding that the Constitutional Court ratify the constitutionality of the LOEI and order the implementation of the law. The protesters also rejected the pressure exerted by the government on the court to annul the LOEI. In Guayaquil, at the San Francisco Plaza, a group of teachers held a symbolic crucifixion in solidarity with those on hunger strike, in defense of public education and in benefit of the future of 4 million students.

The LOEI is an educational reform that modifies about 80% of the existing education system, which has been in force since March 2011. It is the product of 12 years of extensive work of more than 100 educational organizations and unions. The law increases the budget for the education sector to 6% of the country’s GDP, guarantees inclusive and quality public education, includes artistic and cultural teaching, employs special education teachers for students with disabilities at all educational levels, provides free Internet in all public education establishments, increases the basic salary of teachers from 817 USD to 1,086 USD, establishes the reinstatement of teachers who were fired or dismissed during the health emergency due to the COVID-19 pandemic, among other measures.

It was approved unanimously in the National Assembly on March 9 and would have come into effect this month. However, it remains suspended due to a lawsuit filed against it by the IESS. The UNE has urged the nine judges of the Constitutional Court to dismiss the lawsuit and enforce the law.

Through a thread on twitter, on August 1, the UNE’s president Elvis Moreira, on behalf of all those on hunger strike with him, reported on their deteriorating health condition and expressed their hope for a favorable outcome this week.

“21 days have already passed, our health is very deteriorated, our body is weak and we are waiting for both the government of President Lasso and the judges of the Constitutional Court to rule in favor of the ratification of the constitutionality of the LOEI reforms. While the teachers and their organization, the UNE, continue fighting for their rights and radicalize the actions, we, the hunger strikers, are ready to continue our struggle, waiting for a favorable resolution this week and with it to have a new education system and the recovery of our just rights. Thank you all for your infinite solidarity,” stated Moreira. 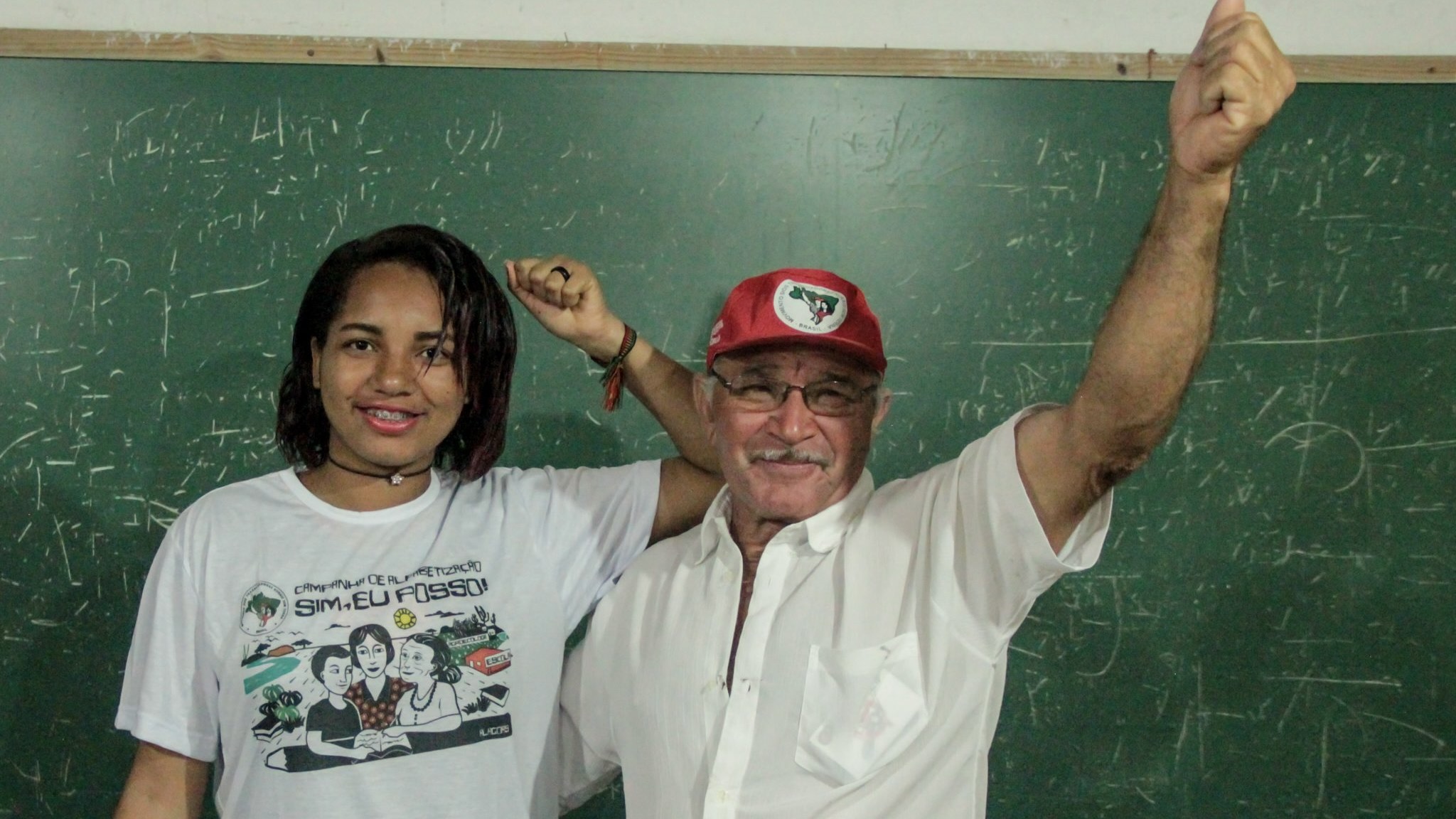