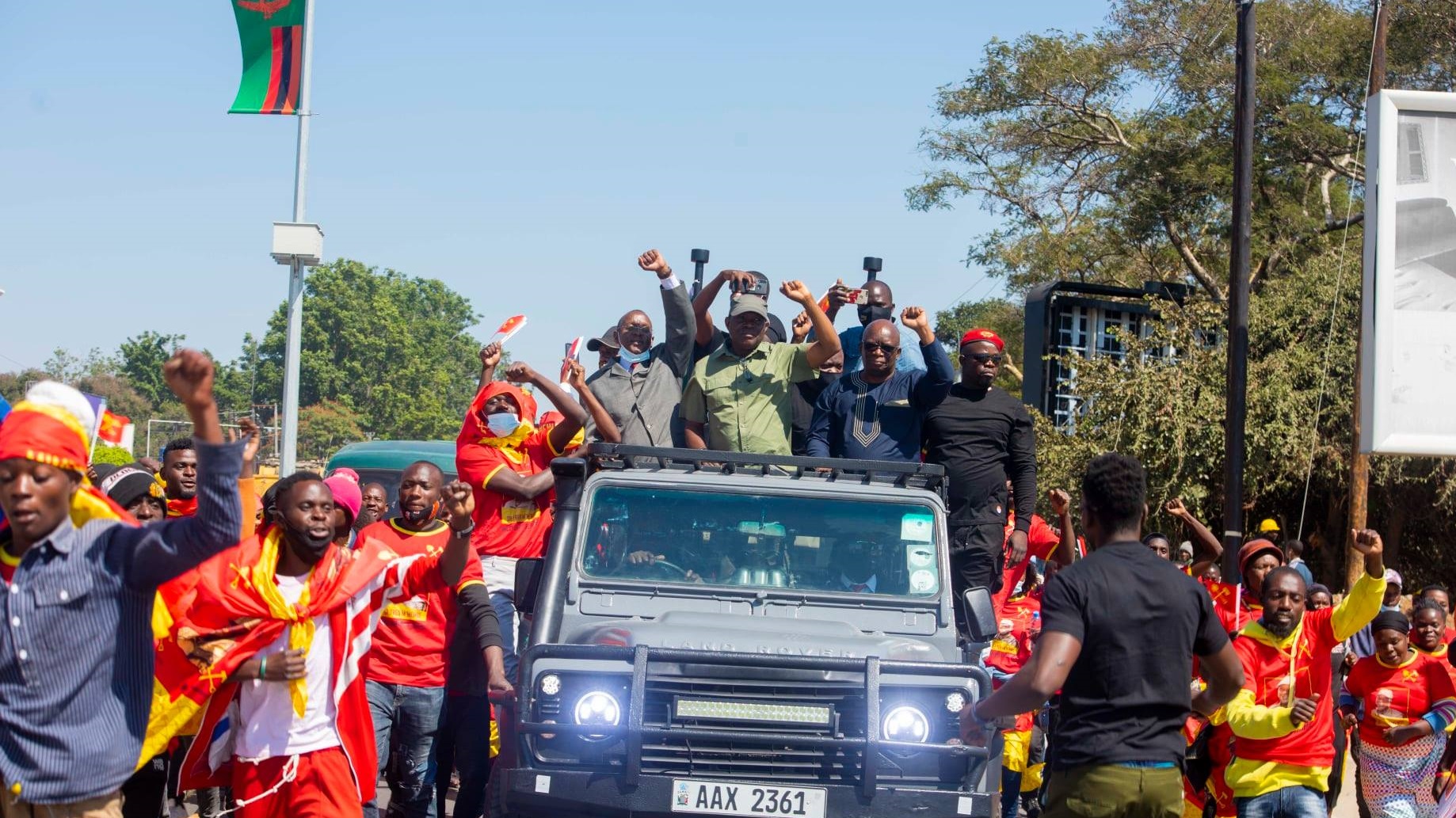 Socialist Party presidential candidate Fred M'membe (center) and other leaders of the party after the filing of nomination papers in Lusaka.

Zambia is a nation divided into Kwa and Ku – the poor and the rich. Those in Kwa live in severely overcrowded conditions, have poor water supply, sanitation, shelter, nutrition, schools, healthcare, roads, and experience very high rates of unemployment. Those who live in Ku have the best of everything, from elite schools and private healthcare to luxury homes and cars.

Against this backdrop, the Socialist Party (SP) was born in 2018. As Zambia gears up for elections on August 12 – for the presidency, parliament, and local government – all eyes are on this young and energetic political contender.

While 16 political parties will contest these elections, the Socialist Party is unique in that it is the only formation pushing an agenda that wants to end the Kwa-Ku divide. Zivotele, meaning ‘vote for yourselves’, is their campaign slogan.

“For us, those who live in Kwa are the agents of change,” explains Faston Mwale, SP Central Committee member and MP candidate for Nkana Constituent Seat in the Copperbelt Province.

Part of building the people’s capacity to change, means working alongside the people, anchored on the principles of justice, equity and peace. SP is prioritizing health, education and peasant agriculture, with the Fred M’membe Literacy Program being one such initiative. M’membe, a renowned journalist, is the SP’s presidential candidate.

“We have married together a literacy and agroecology program, because the SP is not waiting until it gains political power to implement programs,” says Cloudias Musoma who is the SP Central Province Literacy Coordinator. “We are teaching people to read and write now. We are teaching the people how to make their own organic fertilizer now!”

Despite Covid-19 regulations limiting face-to-face interactions, the party has adapted to the circumstances it finds itself in. Campaigning is steeped in creative and innovative cultural activity. Virtual rallies across Zambia feature the party leadership and key candidates from various constituencies.

Penetrating mainstream media, SP’s message pumps through the frequencies of Zambia’s most popular national and community radio and television stations. Speaking local languages, the voices of the peasants and poor people have elevated the level of political debate, raising critical issues about water quality, teenage pregnancies, waste management, illiteracy, hunger and much more.

Across Zambia’s ten provinces, billboards speak in slogans that show a different politics. “Who got more money in their pockets? Them not you.” ‘Them’ is written in green, the color of the current ruling Patriotic Front (PF) and ‘not you’ in red, the color of the majority. Another reads, “5 times too many, it’s time for the real red” poking fun at the opposition United Party for National Development (UPND) who have lost elections 5 times in red regalia but do not show traditionally red politics.

“Campaigning has given us opportunities to understand the challenges people go through in a much deeper way,” says Mwale. “On the Copperbelt (the mineral-rich region in the northern part of the country), there is a huge issue of unemployment. Mines have scaled down significantly. Many shafts have closed. Workers have been retrenched. Without employment how can we pay for electricity, water and other basic needs?”

Taking the baton from the Nguni Commander Nsingu who stood up firmly to the barbaric Cecil John Rhodes’ imperialist expansion project, SP is putting up a fight to close the glaring gap between Kwa and Ku.