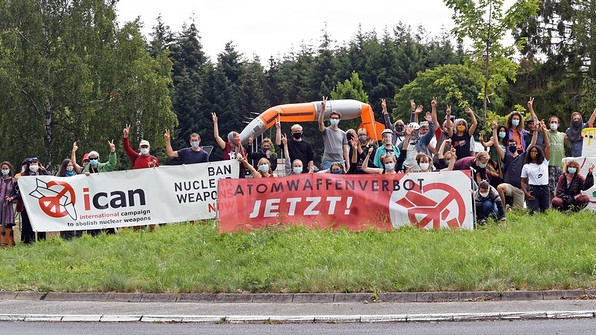 A protest in 2020 at the Büchel Air Base in Germany holds US nuclear weapons. Photo : ICAN

Germany’s progressive sections demanded that the federal state withdraw its plan to buy new bomber planes this year and end Germany’s participation in NATO’s nuclear sharing program. On August 5, before this year’s Hiroshima Day observance, the German Communist Party (DKP) said that the fight against the acquisition of the new combat bombers and the nuclear participation of the federal republic is central in the struggle for peace. The DKP also called for the closure of US bases on German soil and maintaining a peaceful diplomatic relationship with Russia and China. Die Linke (The Left) in Germany also demanded the German Federal Government endorse the United Nations Nuclear Weapons Ban Treaty (TPNW).

According to the German communist newspaper, Unsere Zeit, Germany’s spending on armaments and war manifestations continues to rise even amidst the COVID-19 pandemic. The country is likely to contribute around 53 billion Euros (62.34 billion USD) to NATO this year. Germany is a crucial player in NATO’s nuclear sharing policy and hosts an atomic facility at Büchel Air Base, near the border with Luxembourg. The German communists have called for the government to divest from military spending, invest more in education, social affairs, and health, and close the nuclear base at Büchel.

“The western states are fighting against the loss of their hegemony on a world scale. The German government is pushing the armament of the Bundeswehr [armed forces] and the EU to contain Russia and China together with NATO and the EU. This new Cold War threatens the peace and security of the vast majority of the population. Europe can become the center of an atomic battlefield,” added the German Communist Party (DKP).

On August 6, Die Linke (The Left) said that 76 years after the US’s catastrophic nuclear bombing in the Japanese cities of Hiroshima and Nagasaki, “the world has not freed itself from nuclear weapons. In Germany too, nuclear weapons from the US army are kept, which will be dropped off by the German army in the event of war. More than 700 German cities and communities have joined the Mayors for Peace campaign to abolish nuclear weapons worldwide. The federal government must take this appeal seriously and push for the global outlaw of nuclear weapons. Germany must finally sign the UN nuclear weapons ban treaty.”

German ruling class’s adherence to the NATO war alliance and US diktats has prevented it from ratifying the Treaty on the Prohibition of Nuclear Weapons (TPNW), aka the Nuclear Weapon Ban Treaty, adopted by the UN General Assembly in 2017. Germany, along with 68 other states, mainly nuclear weapon states and NATO members (except the Netherlands), did not participate in the discussions and voting of the TPNW in the UN General Assembly in 2017.

According to a report by the International Campaign to Abolish Nuclear Weapon (ICAN), in an opinion poll conducted by YouGov in 2019, 68% of Germans want the federal government to ratify the Nuclear Weapons Ban Treaty. In a survey conducted by Kantar in 2020, 83% of Germans favored removing US nuclear weapons from the German territory.