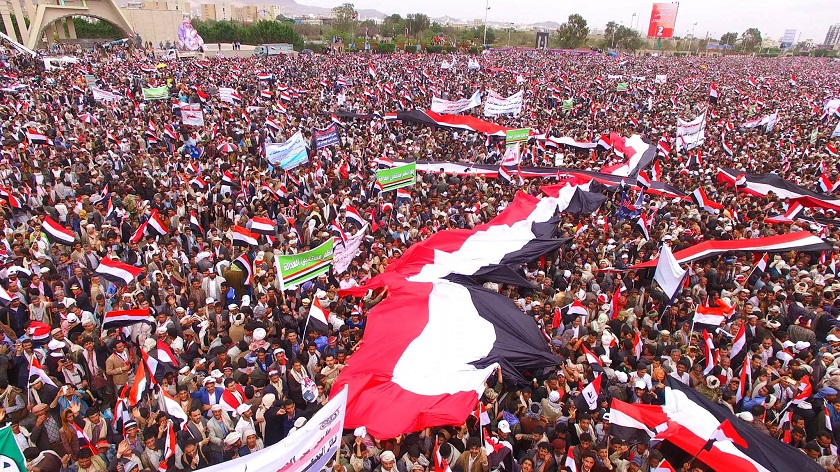 Thousands of Sanaa residents marched in condemnation of the US' besieging Yemen and stressed that the US blockade would make them more determined to liberate their territory. Photo : AhlulBayt News Agency

Thousands of Yemeni civilians staged a protest in the capital Sanaa on Sunday, August 8, against the Saudi-led Gulf coalition’s years-long blockade of the war-torn country. The blockade has caused extensive economic damage and hardships for Yemenis. The protesters also railed against the United States for supporting the coalition. Through its large-scale military operations, it has killed thousands of civilians and deliberately targeted civilian infrastructures. They also condemned the US decision to raise the custom duty prices by 100% for goods imported by Yemen through shipping and weaponizing the US dollar to reduce the value of the Yemeni rial.

The demonstrators chanted slogans against the US and Saudi Arabia while carrying posters to express their anger and condemned the inhumane measures imposed on them. They demanded that the Sanaa airport and the strategically important Hodeidah port be opened. They also demanded an end to the disruption of the supply of essential items caused by the air and sea blockade. Calling them “non-negotiable” rights, they said that the continuing blockade would only strengthen their resolve to resist the multifaceted warfare and keep fighting to liberate Yemen from foreign interference. If their legitimate demands are not met, they called for more Yemeni missile and drone strikes on military targets belonging to the Saudi-led military coalition.

The Saudi-led military coalition launched an illegal military intervention of Yemen in 2015, months after the Houthis expelled the Saudi and US-backed Yemeni government of president Abdrabbuh Mansur Hadi from Sanaa and most of the Northern part of the country. More than 233,000 Yemenis have been killed due to the Saudi coalition’s attacks. A staggering 14 million Yemenis, almost half of the total population of 30 million, are internally displaced refugees due to the conflict.

The war and blockade on parts of Yemen under the control of the Houthis also caused massive suffering. The increasing risk of widespread famine and disease outbreaks has also threatened the lives of Yemenis in the face of acute food and medical shortages. The UN has stated that more than 80% of the country’s population is already in need of international humanitarian assistance for their day-to-day survival and has termed the humanitarian crisis as the worst in the world.

During the demonstrations on Sunday, the chairman of the Supreme Revolutionary Committee of Yemen, Mohammed Ali al-Houthi, in a speech, said that “we are under siege, but we are accused of having a role in the siege in an attempt to distort the facts. We do not need help from the aggressor countries. If the aggressors return the revenues of the Yemeni ports, oil, and gas, then we will be able to pay the salaries of our employees. It is the US that has put a blockade against our country and killed our people. Saudi Arabia and the United Arab Emirates (UAE) are nothing more than tools for implementing US schemes and agendas.” He pointed to the fact that without US military and economic support, the Saudi coalition would not have been able to continue its attacks on Yemen.

A statement read from the demonstrators read, “we condemn the continuation of the sanctions, the prevention of the entry of ships carrying oil derivatives, and the escalation of economic aggression by the aggressor countries, which is aimed at intensifying the suffering of the Yemeni people.” Placing the onus on ending the war in Yemen on the US, the statement went on to add, “the United States is responsible for attacking and besieging the Yemeni people, and we consider the increase in the customs tariff rate to be an American decision made by its mercenaries,” making it clear that the US can pull the plug on supporting the Saudi-led coalition and instantly alleviate the economic hardships of the Yemeni people. Doing so would drastically reduce the killings and violence in the country, most of which take place on US-supplied arms and ammunition.