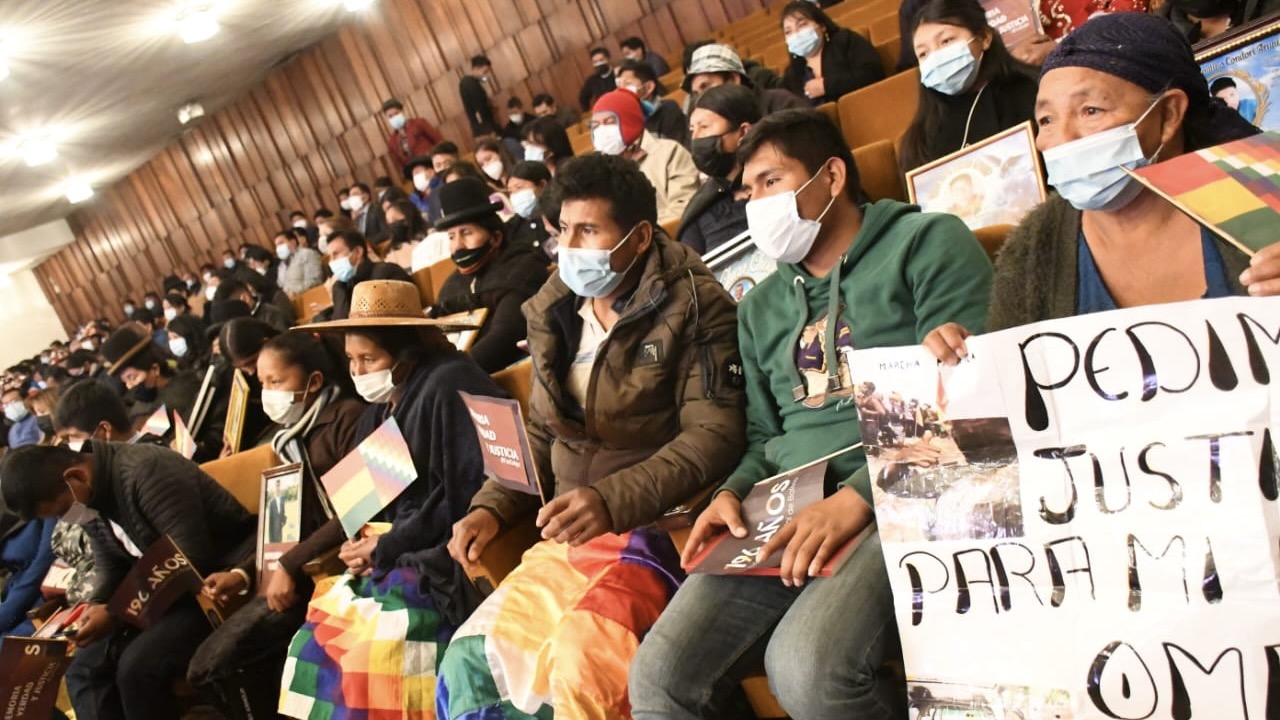 Families of victims and survivors of the Sacaba and Senkata massacres attended the presentation event of the GIEI’s report in the capital La Paz and demanded justice for their loved ones. Photo: Luis Arce/Twitter

The Interdisciplinary Group of Independent Experts of Bolivia (GIEI-Bolivia), on August 17, released its final report on the acts of violence and human rights violations committed during the 2019 coup d’etat in Bolivia. The report confirmed that the coup installed regime led by far-right de-facto president Jeanine Áñez was responsible for massacres, torture, persecution, illegal detention and summary executions of those who took to the streets in rejection of the coup and in support of the democratically elected socialist government of the then president Evo Morales. The report also confirmed that the violence was characterized by ethnic and racial discrimination.

Before delivering the report to President Luis Arce, the head of GIEI, Patricia Tapatá, read a summary of the investigation before an audience of families of victims and survivors of the massacres. Tapatá stated that the report notes that “at least 37 people lost their lives in various parts of the country and hundreds received serious injuries, both physical and psychological.”

She ratified that the killing of unarmed protesters in Sacaba and Senkata by security forces were massacres. “The police and the armed forces, separately or in joint operations, used excessive and disproportionate force and did not adequately prevent acts of violence, leaving citizens unprotected and breaching their constitutional role. The GIEI does not hesitate to classify the events of Sacaba and Senkata as massacres,” said Tapatá.

Tapatá informed that the report found evidence of systematic torture, racial, sexual and gender-based violence, particularly against young Indigenous women detainees by police officers. She highlighted that with deepening social and political polarization, ethnic identity was used as a criterion to discriminate and harass. She said that the Indigenous communities suffered exclusion from institutional spaces, discriminatory treatment in medical care services,  physical and verbal abuse by the military and police, and vandalism of private property by pro-coup paramilitary groups such as the Resistencia Juvenil Cochala (RJC) and the Union Juvenil Cruceñista (UJC).

The GIEI’s head stressed that “it is essential that the victims receive justice, and a process is started for reparation for the damage caused, and immediate attention should be paid to heal the wounds caused by the violence.”

Highly symbolic moment as the GIEI-Bolivia presents its human rights report to President Luis Arce before an audience of victims and families. pic.twitter.com/WnvuKZyKLv

After receiving the report, President Arce thanked the GIEI experts for their contribution to the truth. He said that “the report tells, in a heartbreaking way, the experiences and moments of the suffering of so many Bolivian women and men, (…), we can clearly identify the serious human rights violations, massacres and extrajudicial executions that unfortunately took place in our country during the coup d’état.”

The head of state reiterated that violators will be prosecuted, victims will receive reparations and justice will be done in accordance with the legal system and due process. “There is much to do to compensate for damages. The murders are irreparable, but we will follow the path of justice,” he said. He also announced the creation of a commission to carry out a census of victims and proceed with their comprehensive reparation.

He also said that his government will implement all the 30 recommendations made by the GIEI. He added that “following the suggestion of the GIEI, all para-police organizations and irregular groups created as forces of repression parallel to the State, will be destroyed.”  He also urged the prosecutor’s office and the legislative assembly to apply the recommendations.

Families of the victims and the survivors, who attended the presentation event, welcomed the findings of the report and demanded that now the government guarantee speedy justice for the crimes perpetrated by the coup regime.

The GIEI was created through an agreement signed between the Inter-American Commission on Human Rights (IACHR) and the Plurinational State of Bolivia in December 2019 to assist in the investigations of the acts of violence and human rights violations, which took place between September 1 and December 31, 2019. However, its installation was delayed by Áñez’s regime. The group began its investigation in November 2020, shortly after the government of President Arce assumed office.

The GIEI’s report, divided into eight chapters and 471 pages long, is a product of eight months of investigation. During these months, the experts interviewed 400 victims, victims’ associations, civil society organizations, witnesses, recorded their testimonies and analyzed over 120,000 files to clarify the truth.

The report details the social and political climate that preceded the general elections in October 2019 as well as the climate that succeeded the elections, after they were contested for alleged irregularities and forced the resignation of former president Morales. Although the report does not use the word “coup d’etat,” it does describe the pressure and threats suffered by Morales and other government officials and the irregularities of Áñez’s inauguration.

Several human rights and social leaders and government officials considered that the GIEI’s  report will be fundamental in the judicial investigations that are already underway and will open a new stage to justice, reparation and reconciliation in the country.