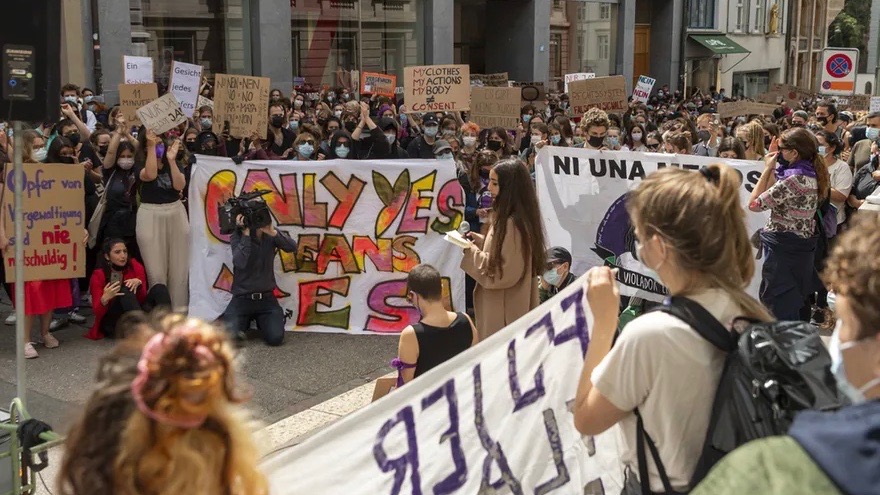 Protest in front of the Basel Court of Appeal on August 8. (Photo: via swissinfo.ch)

On Saturday, August 21, activists from various women’s rights groups in Switzerland, including Women’s Strike/Feminist Strike and Not Without My Consent, demonstrated in front of the Montbenon court in Lausanne to protest the verdict of the Basel Court of Appeal in a rape case. The court made a controversial judgement at the end of July to reduce the conviction of a rapist awarded by a lower court.

Feminist and progressive political groups in the country initiated protests against the judgement, demanding the resignation of the president of the Basel Court of Appeal and calling for progressive revision of the criminal code. Over 500 people joined a protest in Basel on August 8. On August 11, demonstrators observed 11 minutes of silence in front of the Fountain of Justice in Neuchâtel. A national demonstration is also scheduled in Bern on August 31.

According to reports, the Basel Court of Appeal reduced the sentence of the rapist from 51 months in prison to 36 months, suggesting that the victim would have “shared the responsibility” of the rape. The president of the Court of Appeals invoked section 48b of the criminal code to reduce the sentence of the rapist, which refers to cases when “the perpetrator has been led into a serious temptation by the conduct of the victim.”

Women’s right groups also expressed outrage at the fact that the president of the court considered the duration of the heinous act – 11 minutes – as “short”, thus making it ‘eligible’ for moderation in the sentence. The protesting groups have stated that the court “played with fire and sent the wrong signal by blaming the victim and partially exonerating the culprit. This verdict is therefore a humiliation for the victims of violence.”

Various political groups including the Swiss Party of Labor (PST-POP), Swiss Union of Public Service Personnel (SSP/VOD), Solidarity, and others, have condemned the verdict by the Basel court. Several groups have opined that the punitive provisions for rape in the Swiss criminal code are weak and need to be reformed immediately.

Eva Ventura, coordinator of the ‘Not Without My Consent’ campaign, told watson.ch, “today, rape victims are mistreated by the system, and as long as the law is weak, it cannot protect victims properly. According to the current rape law in Switzerland, which dates back from 1942; you have to prove that there was violence and if it doesn’t, it’s not rape”.

“Switzerland has signed the Istanbul Convention, but does not go in the direction of the twelve European countries which, for their part, have included consent in the law on rape,” she added.

Researcher Franziska Schutzbach, in an interview published in blick.ch, said that “our penal code makes it possible to qualify as less the guilt of an aggressor if the victim ‘provoked’ him. It is well known that in sexual offense trials this inevitably leads to the victim often being held at least partially responsible. In a modern country and canton, one should expect court staff to be trained in these matters and to understand that the criminal law, in such cases, should not be interpreted as complicity on the part of the victim.”

The Vaud Committee of the Women’s Strike/Feminist Strike stated that the misogynistic judgement by the Basel Court of Appeal is “a concrete example that shows why our movement accuses that these days ‘justice’ is patriarchal and it reproduces inequalities and discrimination in turn. It is neither fair nor feminist! This is why, as feminists, we need to rethink the whole system and propose alternatives.”