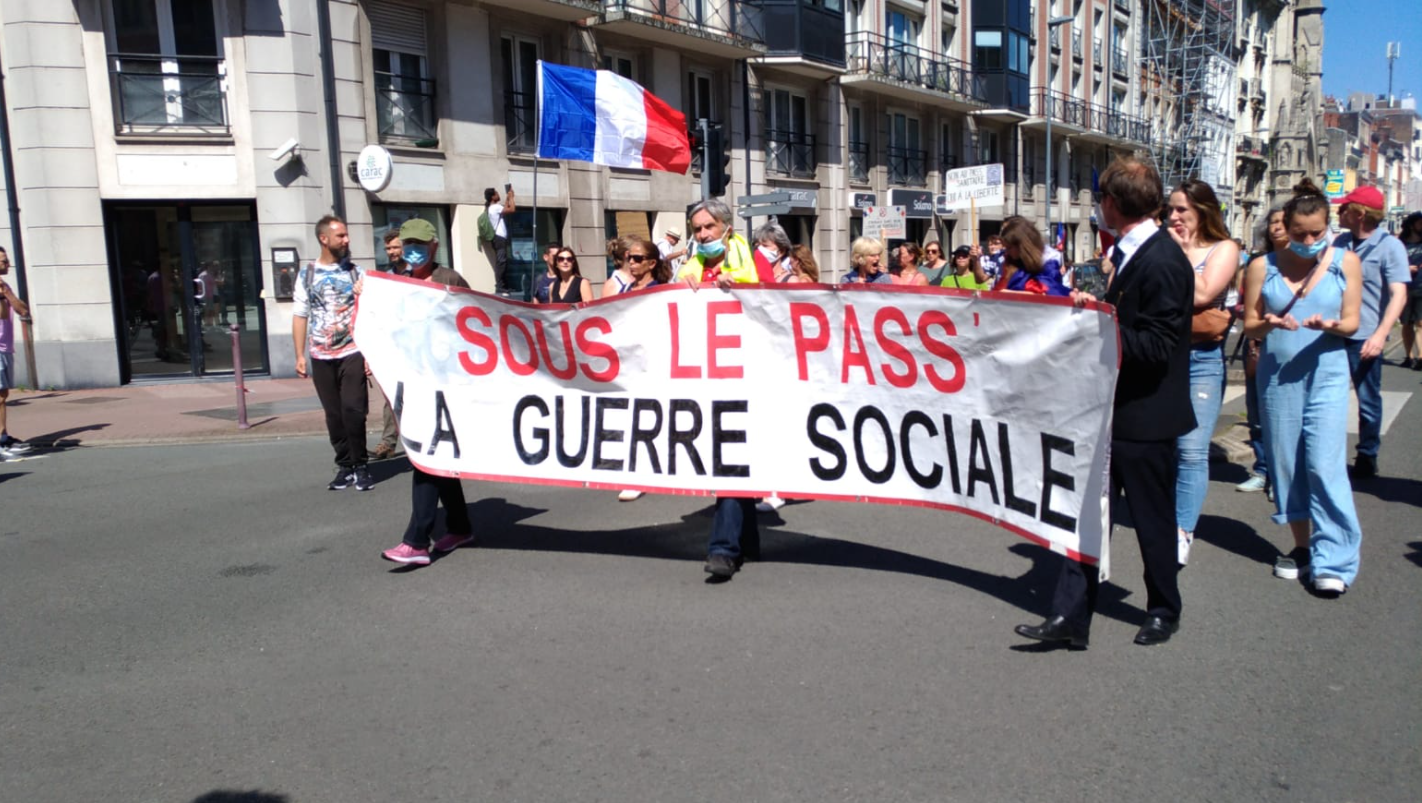 Since August 4, people across France have been protesting the announcement of health measures by the Emmanuel Macron administration, including a Covid-19 health pass and compulsory vaccination for certain professions.

The health pass is a QR code which people receive after completing a full course of vaccination, recently recovering from Covid-19, or testing negative for the virus. The pass was made mandatory for all those who want to access public spaces, including intercity transport, cinemas and cafes. The other measure is the mandatory vaccination in some public services, and in particular among health workers, who face the threat of suspended salaries or layoffs if they do not comply. As a result, health workers have been active participants in the recent protests.

The mainstream media has used this fact to paint the mobilizations as anti-vaccination events. Sources say that it is true that a section of the right-wing has taken part in the protests to push an anti-vax agenda. However, for others such as trade union activist Vladimir Nieddu, the protests are a challenge to the government of President Macron rather than being anti-vaccination gatherings.

Many trade unions activists have engaged with the protests in some way. For example, Nieddu has been present at the events in dozens of cities and has used this space to make sure protestors differentiate between the flaws in Macron’s policies and important public health measures. It should be noted that both the unions that Nieddu is affiliated with – Solidaires and SUD Santé – are vocal advocates of Covid-19 vaccination. Nieddu himself chose to take part in the protests to promote vaccination and a vision of a strong public health system and health democracy.

As of today, 56% of the population in France has been fully vaccinated. According to the French Public Health Agency, as of June 2021, 72% of doctors had been vaccinated as had 58% of nurses and 50% of assistant nurses. These numbers have been used to portray nurses as irresponsible and careless compared to doctors, but what is ignored is the fact that the difference might arise from other reasons.

For one thing, infection rates among nurses are higher than those among doctors and so a larger number of nurses had to postpone their shots. Even more significant is the fact that the vaccination drive in France is not proceeding at the same speed across different social classes. Often, the lower the workers’ position in the medical hierarchy, the lesser the chance they are vaccinated.

A similar trend can be noticed in the general population. Solidaires has warned that there are notable differences in the distribution of vaccines between urban and rural communities, as well as poor and rich neighborhoods. In the Paris area, they say, “it is the towns and the rich neighborhoods where vaccination is going best. This shows us that the question of access to vaccines remains a social issue. And that is why this health pass should be seen as an in-egalitarian and an anti-social measure.”

Left groups and trade unions are concerned that the health pass is becoming an instrument of social segregation, and that the government is sliding into authoritarianism by bypassing public discussion on its health measures. Instead of cracking down on health workers, says Solidaires, the government should fund a more intensive public health outreach campaign and open additional vaccination points around the country, in order to reach more people. With this aim in mind, Solidaires and SUD Santé have published critical analyses of the flaws of the newly proposed measures.

Most importantly, the current strategy lacks an education lens. Nieddu argues that the people should be provided all the information they require in a clear and understandable manner, as well as a place where they can freely ask questions.

Instead, the Macron administration is resorting to regressive measures. In response, health workers and a significant part of the population has chosen to take to the streets. Their decision was certainly fueled by neoliberal policies pushed for by the Macron administration, including the strongly criticized and contested 2019-20 pension reform. In fact, the administration’s bad policy record has led many to doubt their capacity, let alone good faith, to devise public health measures that would prioritize the health of the people.

In the lead up to the pandemic, the health system in France faced reduced budgets, worsening working conditions, an overall reduction in the number of hospital beds, and the closing of hospitals. Once the pandemic hit, the health system faced serious problems under the pressure of the large number of cases. On the other hand, disregard for local production and lack of planning led to shortages of personal protective equipment (PPE) and other tools.

However, all this has not prompted a change of course by the government. It is also not showing any sign of allocating more funds for strengthening the health system or other social protection mechanisms. Greater investment in public services would lead to a more stable health system, capable of providing care to as many patients as needed, and living conditions that would make it easier to follow even strict public health measures.

Instead, the government chose to shift the blame for the spread of the virus on individuals, calling out those who did not adhere to guidance issued by public health authorities. The targets of the criticism were mostly working class and marginalized communities: informal workers who could not afford to stay at home, the people who could not afford masks, and so on.

Trade unions see a continuation of the same approach in the health pass and compulsory vaccination measures, and are calling the measures out as an attempt by the government to avoid taking responsibility for what has been a faulty pandemic response. By blaming health workers and the people for not getting vaccinated, the government is trying to shift the attention from harmful health policies they devised. Next year’s presidential elections are likely another factor in this, as a refusal of these measures can conveniently be used as an excuse for faltering results in case the pandemic continues over the next months.

The problems the pandemic has brought to light can only be resolved by building a stronger public health system. To achieve that, Solidaires and SUD Santé Sociaux argue: “It is not repression and restriction of rights which will make us reach collective responsibility. The announcement of sanctions from September 15 and the withholding of salaries from non-vaccinated health workers is not the way to go.” Instead, trade unions are advocating for a reversal of austerity measures, and democratizing health care by ensuring free access to necessary health items such as masks, additional capacity in beds, health workforce and medical inputs in public facilities, across the country. 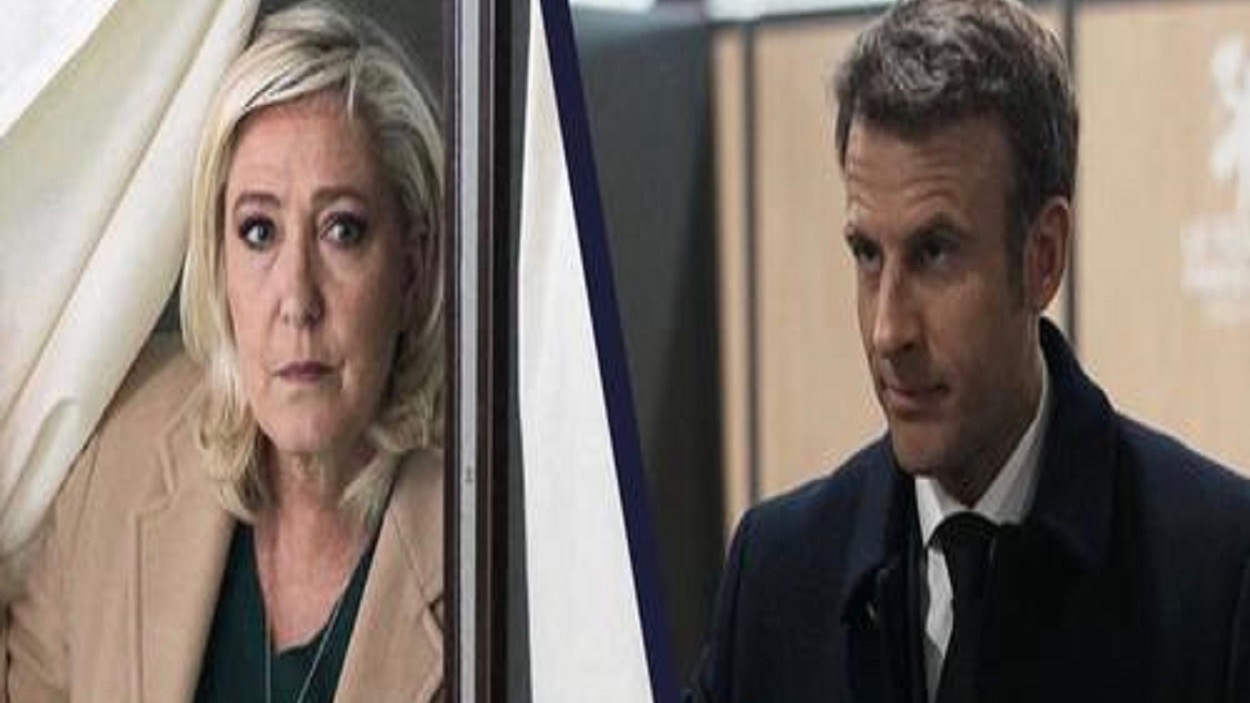