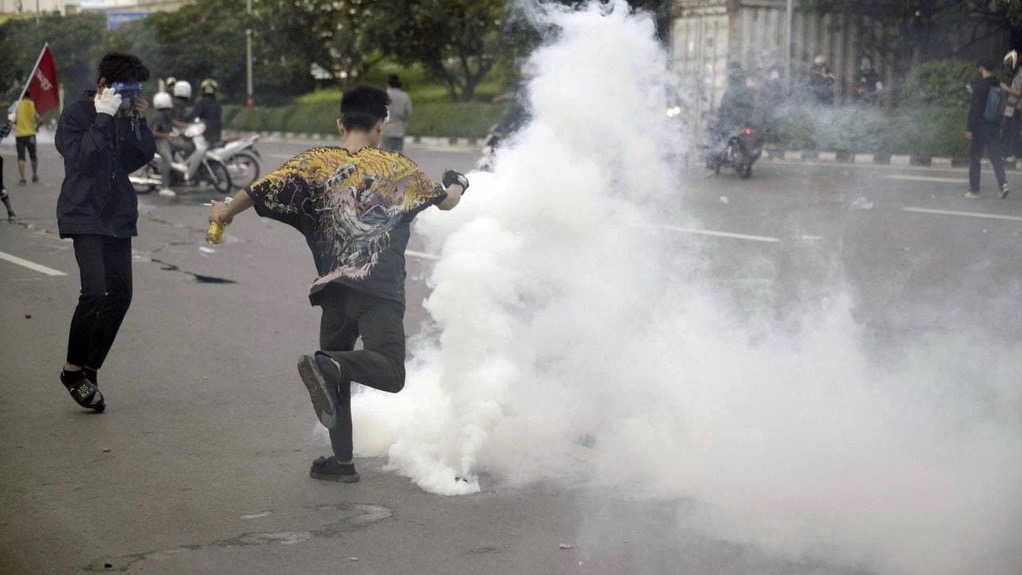 On Wednesday, September 8, pro-democracy protesters held a “Through Gas” rally in central Bangkok as part of a recent wave of daily protests being witnessed in Thailand’s capital, Bangkok. The rally held in Din Daeng district was named in reference to tear gas used to violently suppress protesters in the area last month, which saw dozens of arrests and prosecutions.

Despite the repression by the police, social movements and anti-government groups in Thailand have been holding intensified daily campaigns since the confidence vote in Thailand’s House of Representatives on Saturday, September 4, went in favor of prime minister Prayut Chan-o-cha and five of his cabinet ministers. This is the third time the military-supported government survived a no-confidence motion.

The protests are in response to allegations of corruption and gross mismanagement in the handling of the COVID-19 pandemic in the country. Thailand has recently seen a massive surge in infections, with a seven-day average of 15,500 cases per day. The spread of the Delta variant has been especially alarming as it currently accounts for nearly 93% of the new cases nationally.

In the lead up to the confidence vote, Thailand witnessed routine protests as rising COVID-19 cases and allegations of corruption in vaccine procurement became major national issues. Many of the protesting groups, especially the Red Shirts (or the United Front for Democracy Against Dictatorship), had earlier warned of escalating the movement against the government if the National Assembly continued to vote in favor of Chan-o-cha.

The confidence vote held on Saturday went as expected with the government receiving support from most of the legislators in the pro-government coalition. This was despite widespread protests in the capital and elsewhere.

Nevertheless, support for the government in the House of Representatives has come down considerably, with Chan-o-cha himself receiving the lowest majority (56 votes) of all the cabinet members facing the vote. Rejecting the results of the vote, Red Shirts leader Nattawut Saikuar stated, “we do not accept (the vote) and we will not give up.”

On the day of the vote, activist group Restart Democracy (REDEM) organized a protest rally that was met with a police blockade and clashes with the police outside the Royal Thai Army Band headquarters. On Sunday, the Red Shirts, student groups, and other movements including REDEM called for daily protests in various parts of Bangkok.

The Red Shirts called for protests at the Asoke intersection, a major business district in the heart of Bangkok. The group also held a massive motor rally or “car mob” at Asoke on Monday as parallel protests continued in other parts of the city. The police have responded to the burgeoning protests with arrests and prosecutions attempts.

While protests were being held in Din Daeng on Wednesday, a local court rejected a police request for arrest warrants against two Red Shirts leaders who are among the prominent organizers of the recent wave of protests in Bangkok. The two leaders, Nattawut and Sombat Boonngamanong, are responsible for organizing daily protests at Asoke.

The court directed the police to issue summons against the two since they are to face criminal charges, before filing for warrants.

Earlier this week, the police moved ahead to prosecute two underaged activists for their participation in a protest in August. 16-year-old Paeng and 17-year-old Ton-or are being charged for violating the Emergency Decree by participating in a “car mob” protest on August 10 organized by the student-led United Front of Thammasat and Demonstration (UFTD).

The two are part of the Feminist’s Liberation Front of Thailand, which joined the protest outside the Sino-Thai Tower, a major business establishment in which the family of public health minister Anutin Charnvirakul are among the major shareholders. They were presented before the court along with other activists charged for participating in the car mob.

(Based on inputs and reports from Prachatai)