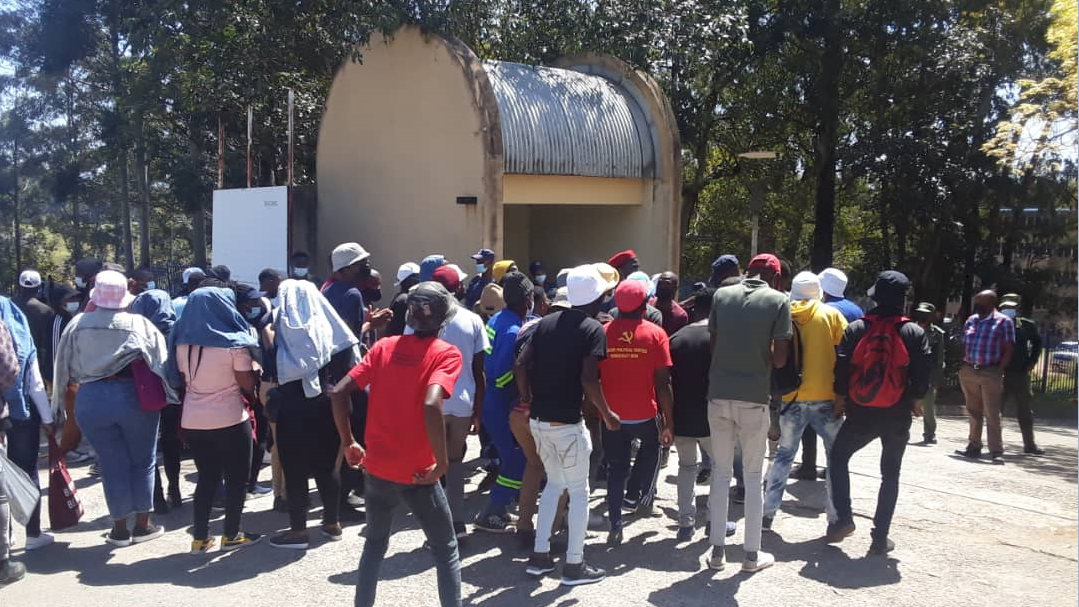 Students of William Pitcher college march to the Ministry of Labor and Social Welfare in Swaziland's capital Mbabane. Photo: Communist Party of Swaziland

On Thursday, September 23, students of William Pitcher college in the city of Manzini, the economic hub of Swaziland, marched to the Ministry of Labor and Social Welfare in capital Mbabane and delivered a petition. The students have been on strike and have boycotted the exams this week. Planning is underway to organize further agitations next week.

The students began their protest last Sunday. They were demanding the immediate dispersal of the unpaid monthly allowances and the promised refund of the hostel fee for the academic year 2020-21, when accommodation and food facilities on campus were unused for the most part due to the COVID-induced lockdown.

The army, allegedly at the invitation of the college administration, entered the campus that evening and brutalized the students. The president of the college’s Students Representative Council (SRC), Bheka Mabuza, told Peoples Dispatch that the students were forced to do repeated push ups while being beaten by the soldiers.

At least ten students had to receive treatment in hospital after suffering severe injuries. Five of them, he said, had suffered health complications due to asthma attacks triggered by the many tear gas canisters that were lobbed inside the dormitories by the soldiers to force the students out. Students providing first aid to the injured were allegedly picked and assaulted separately.

By evening, the students had been forced to vacate the campus. The following day, when the first paper of the exams for the academic year was scheduled, the students staged a boycott, as resolved by the SRC earlier on Friday.

Mabuza explained that “When the SRC negotiated with the administration earlier last week, the vice-principal of the college told us that refund of hostel fee and the payment of pending allowance for the month of August and September had  been approved by the Ministry of Education under the Principal Secretary. Only the signature of the Accountant General is pending, she said.”

“However,” he added, “when we asked for her to give us the same statement in writing, she refused to respond. After waiting till Friday, the SRC gave the call to boycott the exam which was to begin from Monday.”

On Monday, September 20, “the police arrived on campus and told the SRC that they were only present to ensure that no student who wishes to take the exam is forced to boycott.” In other words, the police were there to ensure that a picket line would not be set up. The college administration had allegedly told the police that the majority of the students wished to write the exams, but were held back by some “ring leaders” of the protest.

But a picket did not prove necessary as no one wished to write the exam, and the students reiterated to the police that the SRC’s resolution to boycott exams reflected their unanimous will.

The demand for refund of hostel fee is a year old, and was first put forth by the SRC in September 2020. The strike that followed in November was met with brute force. Tear gas and beatings were widely used in the crackdown. At least five students were arrested.

However, the unrest forced the authorities to come to the negotiating table, where the students were promised that the government will take measures to ensure that the refund is facilitated. “Nothing came of it. It was an empty promise. Students in colleges across the country are holding protests and boycotts demanding the same,” Mabuza said.

Willian Pitcher college’s SRC was also assured that the government will extend the allowance by two months over the standard 10 months in order to compensate for the additional costs imposed by online learning. “Prior to the COVID pandemic, E1,690 (USD 115.88) per month was a student’s monthly allowance from October to July. The government had promised to give an additional E950 (USD 65.14) per month for August and September this year,” Mabuza said. With September coming to a close, the students are yet to receive this payment.

In a country where most of the industries and enterprises are owned or controlled by the king and operated for the profit of himself and his cronies, condemning over 60% of the population to live on less than USD 2 per day, these small sums given as allowance are a lifeline without which a majority of the students cannot pursue college education.

The denial of this allowance as promised and the charging of hostel fee even though its facilities were not used has thus forced the students to boycott exams in protest as a last resort. The college administration decided to postpone the start of the exam by a day to Tuesday. “However, not one student has attended any of the exams. The boycott is total,” Mabuza added. The final paper was on Thursday, September 23.

The police had allegedly sealed off the campus during the days of the examination, telling the students that only those agreeing to head straight to the exam hall will be allowed to enter. Students residing in hostels were thus denied access to their beds and sanitary facilities.

Unprecedented pro-democracy protests across the country

“The regime’s primary objective in putting down student protests is to weaken the student movement. The student movement, overwhelmingly working-class based, has played a crucial role in the struggle for democracy,” the banned Communist Party of Swaziland (CPS) said in a statement. “They were among the first to embrace and take forward the Communist Party’s “Democracy Now” campaign.”

Over the last few months, an unprecedented pro-democracy movement, demanding multi-party democracy and an end to the rule of the last absolute monarch on the African continent, has for the first time mobilized the rural majority and rattled King Mswati III, whose security forces have grown increasingly brutal.

The industrial areas in Manzini where William Pitcher college is located is a hotbed of anti-monarchist sentiment. The city saw widespread attacks on properties and factories owned by the King and his associates in late-June and early July, after the security forces used violence against peaceful protest marches.