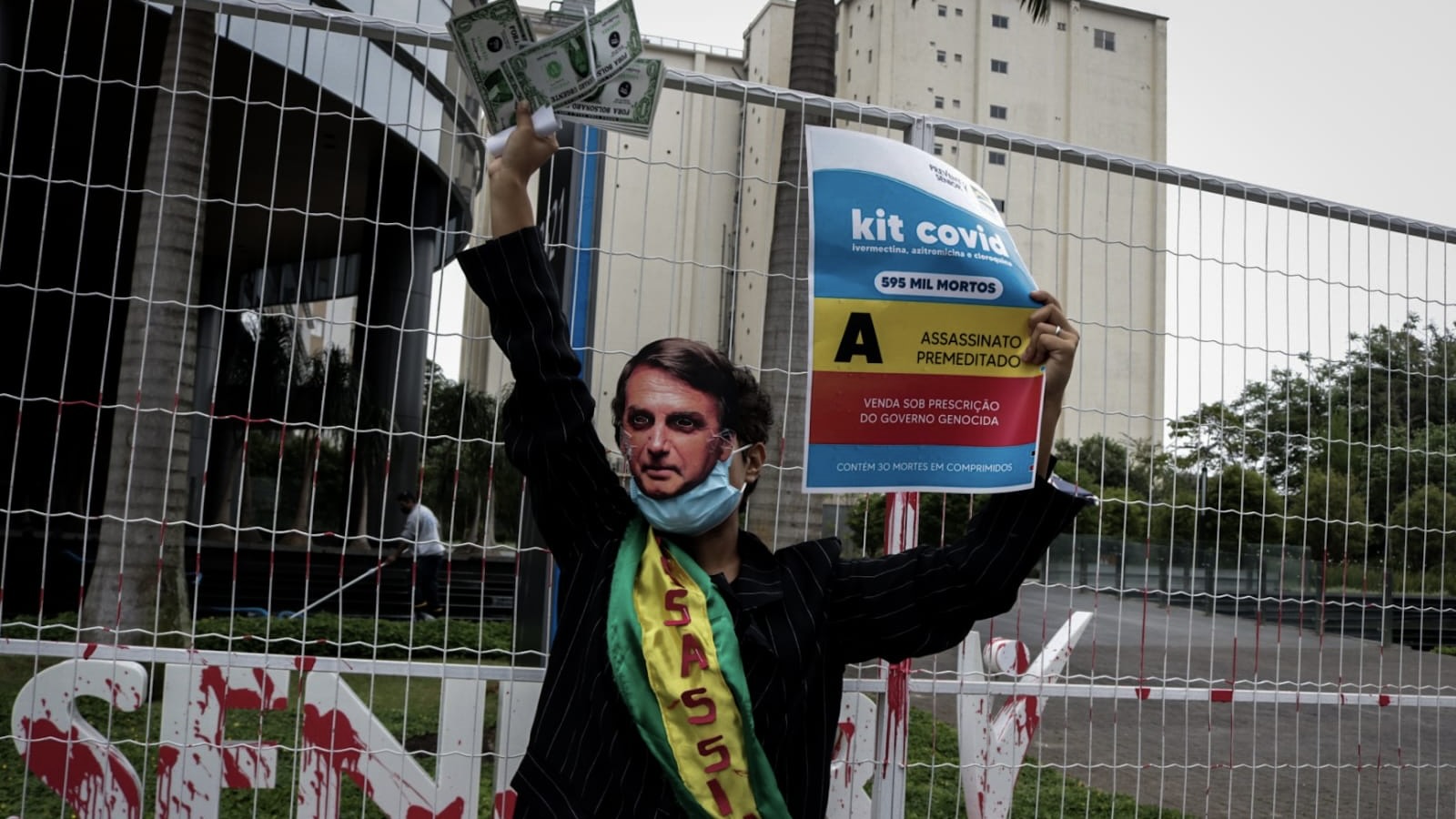 On September 30, members of the Brazilian youth movement Levante Popular da Juventude held a protest outside the headquarters of the Prevent Senior company in the city of São Paulo. The movement alleges that the private healthcare network, in pursuit of greater profits, subjected patients to various unethical medical practices which in turn caused avoidable deaths. Many of these practices of the group were reportedly in line with the beliefs of president Jair Bolsonaro whose unscientific views on handling the pandemic have been widely criticized.

On Thursday, members of the youth movement threw red paint on the company’s logo, painted “Prevent are assassins” (Prevent assassina!) outside the building, and threw fake money with “Get out Bolsonaro now!” printed on it. Their action is referred to as an escrache, which in Latin America and the Caribbean refers to a protest to publicly condemn and draw attention to a certain person or entity. In escraches. militants use symbolic ways to communicate their message.

The organization’s statement about the action said that under the leadership of Brazilian president Jair Bolsonaro, the country is experiencing one of the most challenging moments in its history as over 600,000 lives have been lost to the COVID-19. Meanwhile, the unemployment rate is skyrocketing, hunger has returned, and violence proliferates while opportunities dwindle. In this context, private health entities, instead of supporting the Brazilian population in dire need, have taken advantage of vulnerable, sick people for their own profit.

Prevent Senior recently came under scrutiny as it was mentioned in the Parliamentary Commission of Inquiry (CPI) that is investigating the federal government’s handling of the COVID-19 pandemic. During this investigation, testimonies of doctors who worked for the Prevent Senior revealed widespread instances of medical malpractice.

As per the testimonies at the CPI, the directors of Prevent Senior pressured doctors to treat patients with drugs that were proven to be ineffective such as hydroxychloroquine, ivermectin and ozone treatment – which is prohibited by the Federal Council of Medicine. It alleges that they were essentially using patients as experimental subjects without their or their families’ consent. These testimonies also revealed that employees at Prevent Senior were allegedly forced to work without personal protective equipment even if they were infected with the virus.

Furthermore, the company allegedly oriented healthcare workers to reduce the flow of oxygen ventilators for patients in intensive care stating that “death is also a way to discharge patients,”. Evidence also points to the likelihood that the company manipulated the medical records and death certificates of its patients by not including COVID-19 as the cause of death.

“We stained Prevent Senior with red paint and spread Bolsonaro dollars to denounce those who profited from the deaths of thousands of people. The company did all this with the support of the Federal Government, as it had a direct relationship with the parallel office that organized corruption schemes in the purchase of Covaxin vaccines and encouraged institutions that recommended the use of the Covid Kit [that included hydroxychloroquine and ivermectin as preventive to COVID-19],” explained Julia Aguiar, who is from the national coordination of Levante Popular da Juventude and vice-president of UNE (National Student Union).

Levante further highlighted that the case of Prevent Senior shows the lengths that the federal government went to to enforce its fake news narrative about the effectiveness of the anti-COVID drugs, as well as the complicity between private healthcare providers – Prevent Senior specifically – and the Federal Government. The president’s son, Flávio Bolsonaro, had even praised the company’s treatment plan and called on the public health system, SUS, to adopt them.

On the same day as the action organized by Levante, the municipal government of São Paulo approved the creation of its own Parliamentary Commission of Inquiry to investigate the actions of Prevent Senior, which has its headquarters in the city. Antonio Donato, a member of São Paulo’s council from the Workers’ Party of Brazil (PT) told Folha de São Paulo, “Prevent Senior is a healthcare company that is basically of São Paulo, the majority of victims are from São Paulo, the falsification of data about deaths impacts the statistics of São Paulo, the health surveillance here has the responsibility of inspection. So we believe that this can advance because the CPI in Brasilia has a broader focus.” The committee will have a 120-day period to conduct investigations, with a possibility of extensions if necessary.