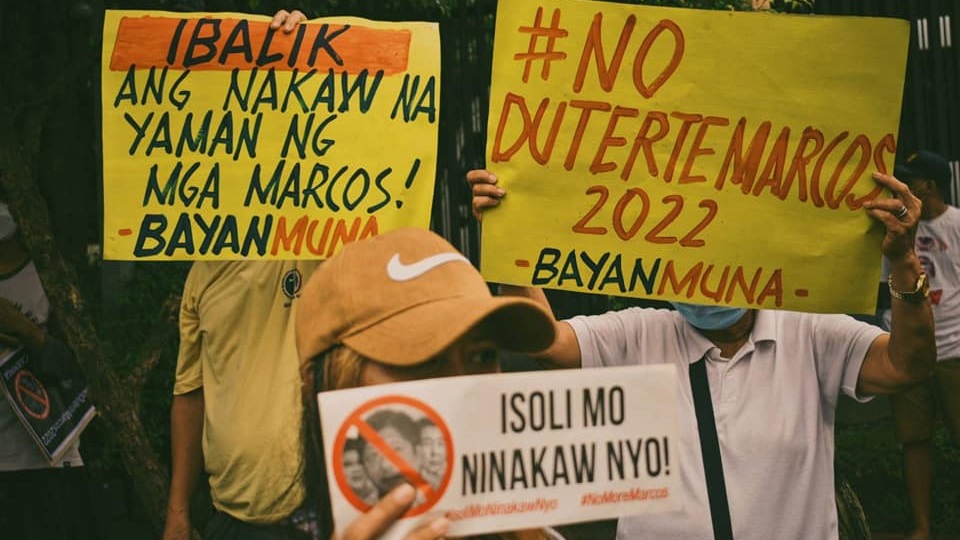 Protesters outside the office of the Commission on Human Rights hold posters calling on Filipinos to reject Marcos Jr’s and pro-Duterte presidential bids in the upcoming election. Photo: Tudla Productions/Facebook

Social movements in the Philippines have come out to oppose the presidential bid of the former dictator’s son. Ferdinand Marcos Jr., also called ‘Bongbong.’ Marcos filed his nomination papers for the upcoming presidential election on Tuesday, October 5. He is the son of the former president Ferdinand Marcos, whose over 20 years in power included nearly a decade of brutal martial rule.

The Marcos dictatorship was a period of violent repression of political opponents and widespread human rights violations. Bongbong’s mother, Imelda, has been charged and convicted of corruption during her term as the governor of Metro Manila, under the Marcos dictatorship.

The Campaign Against the Return of the Marcoses and Martial Law (CARMMA) has called the candidacy “a brazen show of disregard and contempt for the thousands of Filipinos killed, disappeared, tortured, displaced and violated, and the Filipino nation whose economy was plundered and wrecked during the Marcos dictatorship.”

CARMMA also led a demonstration, along with other rights activists and civil liberties advocates outside the office of Philippines’ Commission on Human Rights, asking voters to not only reject Marcos Jr, but also other candidates supporting or aligned with president Rodrigo Duterte.

“The darkness brought by the dictatorship was not a tale,” said Fides Lim, spokesperson of Kapatid, a group supporting families of political prisoners. “The family that was responsible for the killings, illegal detention, and gross human rights violations should not be in Malacañang (the presidential palace) again.”

The Cordillera Human Rights Alliance pointed out that apart from corruption, the Marcos regime was marked by punitive violence and crimes of torture, illegal arrests and political murders.

Marcos Jr’s presidential bid has evoked strong responses from a large number of social movements and also survivors and families of victims of the martial law era. The presidential election will be held in 2022 as part of the nationwide general election, along with other government positions and the House of Representatives.

Marcos Jr’s submission of nomination comes days after incumbent president Rodrigo Duterte announced his withdrawal from his vice-presidential bid and his retirement from active politics after he finishes his tenure next year.

This is significant as Duterte continues to be a largely popular incumbent, despite his record as president. Marcos Jr. has been trying to position himself as a successor to the current president.

Marcos Jr. will be standing as the official candidate of Partido Federal ng Pilipinas (PFP), a conservative party founded by Duterte cabinet member and agrarian reform secretary John Castriciones. The party was formed as a pro-Duterte block in the Philippines’ Congress.

In his presidential bid, Marcos has already promised to continue the violent “war on drugs” which has killed thousands and is increasingly under scrutiny by international rights watchdogs and is set to be investigated by the International Criminal Court. Marcos has also promised to block any potential probe against president Duterte, once he steps down from office.

The ruling Partido Demokratiko Pilipino–Lakas ng Bayan (PDP-Laban) is yet to arrive at a common presidential candidate, owing to infighting. A section of the party has already organized a presidential campaign around senator and disputed party president, Manny Pacquiao, who is also trying to project himself as an upholder of Duterte’s legacy.

At the same time, social movements have insisted that Duterte’s legacy is not far off from that of Ferdinand Marcos. During the 49th annual commemoration of the Marcos-era Martial Law declaration held last month, social movement, church leaders and workers’ groups organized a massive rally in Manila and elsewhere, asking people to reject the legacies of Duterte and Marcos.

“Voters should be vigilant against a Duterte-Marcos tandem whether this be via the presidential daughter and the dictator’s junior or even the President himself,” Nim had said in her statement.

Read More: Under the shadow of Duterte, Filipinos remember the crimes of Ferdinand Marcos

Sara Duterte, Davao City mayor and the president’s daughter, who has been consistently leading the polls for both the presidential and vice-presidential posts, is yet to declare whether she will join the race. If she does, Marcos’ chances could be further affected.

According to opinion polls, Marcos is currently the second-most preferred presidential candidate, behind Sara Duterte. While presidential term limits prevent Duterte from running for a re-election, observers expect Marcos to benefit from his absence.

Marcos is also only slightly ahead of two centrist candidates, the Manila mayor Isko Moreno and the incumbent vice-president Leni Robredo, with poll observers expecting a very close fight in the coming months.

Robredo’s candidacy, announced on Thursday, October 7, is significant as she won the vice-presidential election in 2016, defeating Marcos Jr, by around 263,000 votes, one of the smallest margins in the country’s history.

Even as Robredo trails behind five other candidates right now, she is also the only one among the major candidates to not position herself in the Duterte camp. She has been one of the biggest critics of the Duterte administration within the government.

Unlike the centrist Moreno, who maintained neutrality on several issues, Robredo has the advantage of consolidating opposition support against excesses of the Duterte administration. Announcing her candidacy representing a newly-created opposition alliance, 1Sambayan, Robredo declared that the campaign “will defeat the old and rotten type of politics. We will hand back to ordinary Filipinos the power to make change.”

Considering the fact that the Dutertes’ popularity has come down over the past few months, largely due to the president’s shoddy handling of the COVID pandemic and corruption allegations, the space for a continuation of the incumbent’s president’s policies may be shrinking.