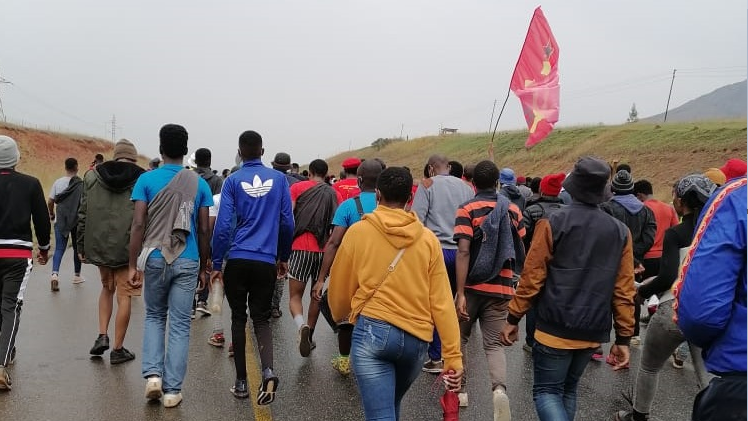 Vehicles rushing the injured protesters to the government hospital in the capital city, Mbabane, were not allowed to enter the premises. The entrances were blocked for the security of king Mswati III, who was inaugurating a new Outpatient Department (OPD) building in the hospital, less than a couple of kilometers away from where the protesters were being attacked by his security forces.

“Nurses had to go out to the streets to attend to the injured. Some of them were given first aid. [About 10] others with more serious injuries had to be carried in physically as there is a major shortage of ambulances,” Thulani Gamedze, a nurse at the hospital, organized under the Swaziland Democratic Nurses Union (SDNU), told Peoples Dispatch.

“We are really struggling to treat the injured, especially over the last two days as the protests have again spread across the country. There is a severe shortage of equipment and medicine,” he said.

He could not help comment on the absurdity of opening a new OPD at a time when even basic painkillers like paracetamol are in short supply. Medics have to run from pillar to post to find the I.V liquid and cannulas. “We are often forced to treat injuries by improvising with tools that are meant for other purposes,” he added.

One of the three protesters who was shot in the town of Siphofaneni in central Swaziland was allegedly left unattended with a bullet wound for nearly an hour till the firing subsided, because even paramedics trying to attend to him were allegedly targeted by soldiers.

In Nhlangano, an industrial town in the south, where protesters blocked roads with burning tires, police reportedly fired live rounds and tear gas, including into homes of people. No serious injuries have been reported from the town.

In eastern Swaziland, on the outskirts of Siteki town – where a protest was held outside the police station demanding justice for Nhlanhla Kunene who was killed by the police on October 9 for a curfew violation – the police allegedly forced a protester on to the burning tires that were used to block a road. They insisted that he extinguish the flames using his own body.

In the northwest, on the outskirts of Pigg’s Peak town, a police officer who was beaten up after his weapon was snatched by the protesters, was hospitalized along with the four protesters he and his colleague had shot.

Another 10 people, according Gamedze, were operated for injuries in RFM hospital in Manzini, the country’s economic and industrial hub which has been a hotbed of anti-monarchist sentiment.

The Communist Party of Swaziland (CPS) said the city has been “brought to a standstill” on October 13, as public transport operators across the country joined the protests calling for “Democracy Now!” – a campaign which over the last months has posed an unprecedented challenge to the rule of Africa’s last absolute monarch.

The campaign has gone through many phases, mobilizing different sections of the society. Its momentum over the past few weeks has been building on the student front with boycotts and protests under the leadership of the Swaziland National Union of Students (SNUS).

“This momentum culminated into a country-wide protest with public transport workers, civil servants and many other sections taking the streets on Friday,” said Simphiwe Dlamini, former SNUS leader and currently the national organizer of the CPS.

Students have been at the forefront

It is to be recollected that the protests led by SNUS against the killing of a student, Thabani Nkomonye, by the police in May escalated into a country-wide pro-democracy movement against the monarchy. While anti-monarchist resistance had been building up over the decades in cities and university campuses, what made this movement unprecedented was the wide-spread mobilization in rural areas.

Following the violent crackdown by the police on peaceful rallies and marches demanding multi-party democracy and the right to have an elected government, the protest movement shifted tactics, resorting to attacks on properties and industries owned by the king and his associates. Manzini city saw most of the action in this phase.

After ordering the army to bring the streets back under his control, king Mswati fled Swaziland at the end of June, and returned only towards mid-July. As many as 70 people were killed by security forces in June and the first half of July.

Following intermittent protests in various cities, a sustained agitation began once again on the student front, starting with the boycott of exams by second semester students of William Pitcher college in Manzini on September 23.

They were demanding the disbursal of the unpaid monthly allowances and the promised refund of the hostel fee for the academic year 2020-21, when accommodation and food facilities on campus were unused for the most part due to the COVID-induced lockdown.

The students were attacked and forced out of the campus by the police and army. This only fanned the flames, agitating more and more colleges and schools whose students joined the boycott, raising similar demands for accessible quality education.

Police once again fired tear gas into the campus of William Pitcher college on the night of October 9, this time to intimidate the final-year students who had planned to boycott the exams the next day, Dlamini said. Yet again, the police action not only failed to intimidate the students who went ahead with the boycott, but also provoked fellow students from other schools and colleges.

Students from well over 50 schools participated in the boycott and protest on October 11. Most of these students, he said, were below the age of 18 – including many as young as six.

On October 13, a student of Nzongomane high school near Nhlangano town was shot dead. In a statement that day, Nonhlanhla Dlamini, Executive Director of Swatini Action Group Against Abuse (SWAGAA), an NGO working to end gender-based violence and sexual abuse, urged the people “to stay vigilant and ensure the safety of children, report detained or missing children to our toll-free line 951.. Let us work together to ensure their rights are not abused and they get legal representation.”

Following the killing of this student, other sections of the society – including public transport workers and civil servants – once again joined the protests, culminating in the country-wide action on October 15.

An end to absolute rule of the monarchy is central to the students’ demand for accessible quality education, public transport workers’ demand for safe working conditions and end to harassment by police, and the civil servants’ demand for living wages.

The government pleads poverty before their demands. However, king Mswati, who controls most of the economy and runs it for the profit of himself and his cronies, spends billions of dollars every year on grand festivities, his birthday party, palaces, jewels, a fleet of Rolls Royce cars, private jets and other indulgences of the royal family.