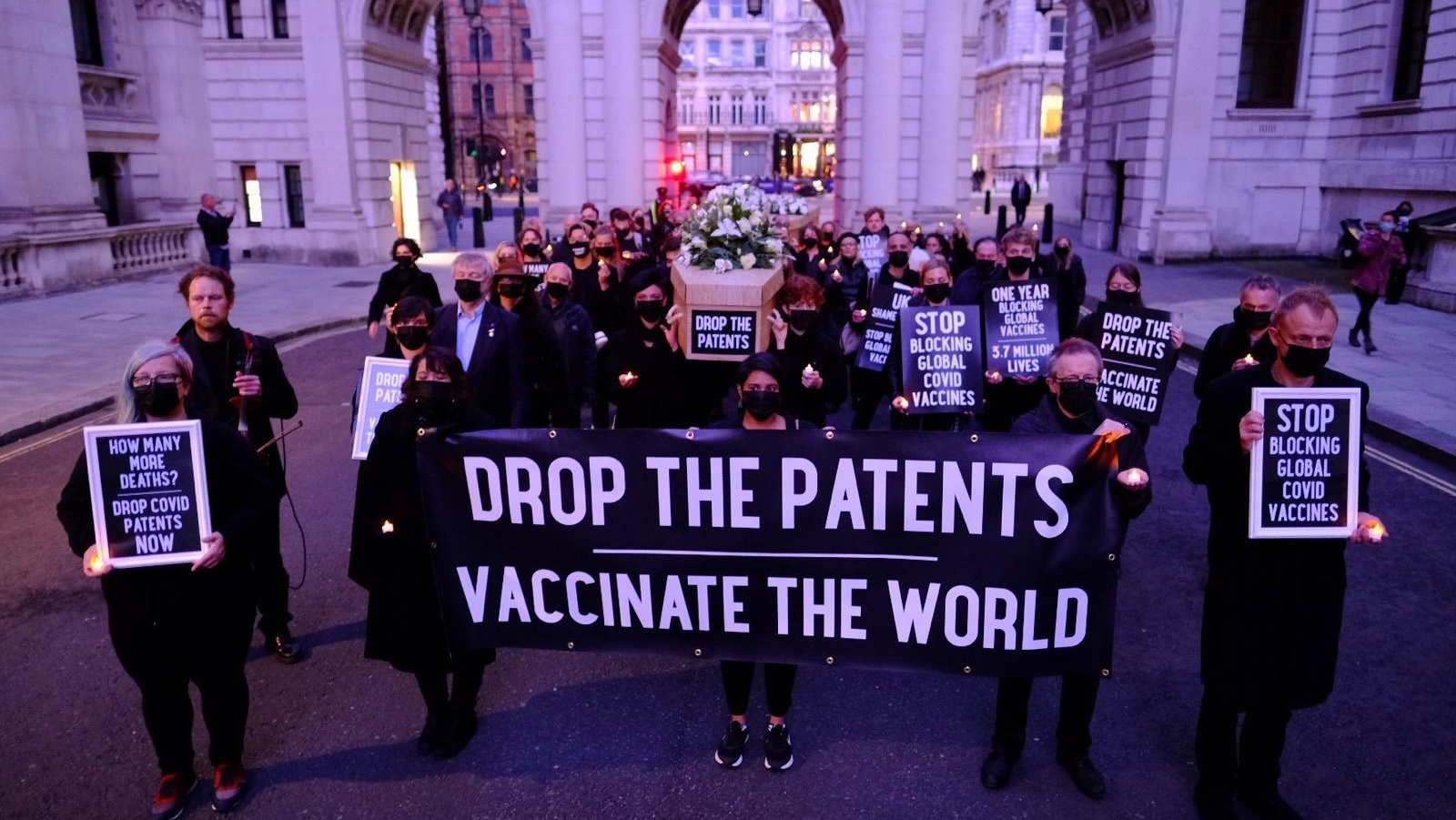 A protest against the UK government’s refusal to back the TRIPS waiver proposal held in London on October 12. Photo: Jess Hurd/ Global Justice Now

Health activists gathered at Geneva’s central train station on Wednesday, October 13, calling on the EU, the UK, Norway and Switzerland to endorse the TRIPS waiver proposal at the World Trade Organization (WTO). “As Europeans, we are ashamed that our political leaders are among the last opponents to a just solution to end the pandemic and save lives,” said the campaigners in a press release.

“If patents were lifted today, we could vaccinate the whole world in less than one year,” stressed Frank Prouhet, a doctor and activist from the collective Stop patents on Covid-19 vaccines, citing research by Public Citizen. Stéfanie Prezioso from the left platform Ensemble à Gauche (Together on the Left) said it was high time to admit that COVAX is not ensuring equitable access to vaccines in the Global South, and that people there continue to die because European governments do not want to stand up to Big Pharma.

Each day since the TRIPS waiver proposal was first tabled and Europe started opposing it, 10,000 people died of COVID-19, stated the campaigners. They called it deplorable that the profit of Western pharmaceutical companies is put ahead of the lives of thousands in the Global South, and said that the refusal to back the waiver proposal opens the door for mutations to develop and spread – postponing the end of the pandemic even more.

European leaders have the power to stop that trend and the people are asking them to take concrete action in the lead up to the next WTO ministerial conference, which will be held on November 30. The Geneva protest was the culimation of a series of days of shame coordinated by the European Citizens’ Initiative Right to Cure/No Profit on Pandemic and Attac Europe in the period between October 9-13.

The days of shame brought together campaigners from Europe, but also other continents, through physical and online protests. In Vienna, Austria, a group of grandparents started a three-day vigil for those who died of COVID-19 over the past year. Activists of Global Justice Now and the STOPAIDS network marched the streets of London carrying coffins to Downing Street, warning PM Boris Johnson that the UK government’s refusal to back the TRIPS waiver makes them complicit in the 3.7 million COVID-19 deaths that occurred over the course of the past year. In Norway, protesters gathered in front of the Ministry of Foreign Affairs, while those in Spain organized an action to collect more signatures for the ECI Right to Cure.

The actions were supported by trade unions as well. The International Transport Federation (ITF), a global union representing around 12 million workers, sent an open letter to European heads of state saying that “inequality in access to vaccines and treatment is posing a threat to their sector and safety,” and asked them to support the TRIPS waiver proposal ahead of the ministerial conference.

Still, Europe keeps stalling the TRIPS waiver negotiations, buying time for Big Pharma to scale up production and profit off the pandemic in poor countries – and so fresh protests in Europe will surely take place before the November 30 meeting. The Italian committee of Right to Cure, together with Emergency and trade union confederation CGIL, has already announced a protest in Rome on October 20, and others are likely to follow their example.

Find out more about the ECI Right to Cure here.