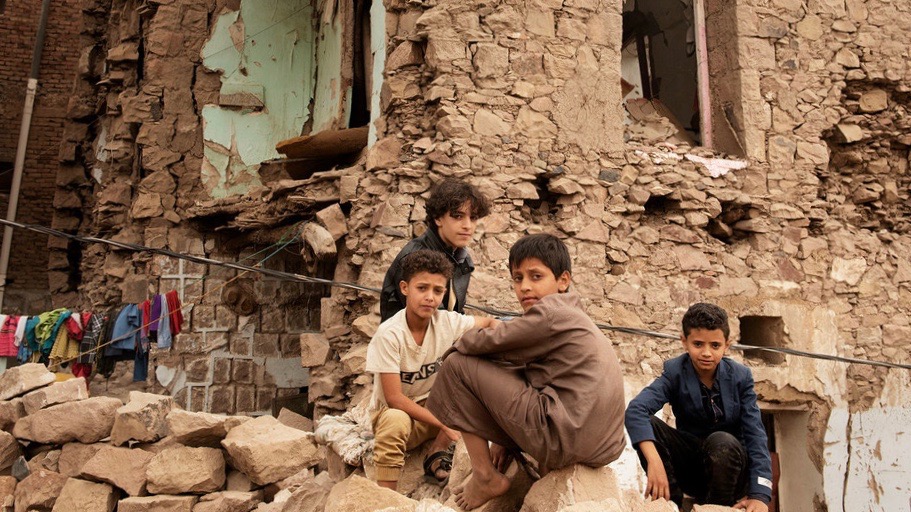 Children sit in front of a house damaged by an airstrike in Sanaa, Yemen. (Photo: UN)

UNICEF, the United Nations body for children’s welfare and rights, in a statement on Tuesday, October 20, said that the number of children killed or injured in Yemen due to the ongoing civil war and conflict has crossed 10,000. Terming it a ‘shameful milestone’, UNICEF spokesperson James Elder said that the figure amounts to four children dying or being wounded every day in the Yemen conflict. “These are of course the cases the UN was able to verify. Many more child deaths and injuries go unrecorded, to all but those children’s families,” he added. Latest UN figures state that a total of 3,455 children were killed and more than 6,600 wounded in the fighting in Yemen between March 12, 2015 and September 30, 2021.

Elder, who recently visited Yemen, said, “I returned yesterday from a mission that took me to both the north and south of Yemen. I met scores of children, many inspiring; all suffering. I met pediatricians, teachers, nurses – all shared personal stories that mirror those of their country: they are on the brink of total collapse.” He appealed to the international community to donate to UNICEF so that it can adequately assist and save Yemeni children from death, famine, disease and starvation. He said that funds to the tune of USD 235 million are urgently required to continue its humanitarian work till mid-2022.

In addition to the child casualties in the seven-year long conflict, Elder shared other grim statistics related to education, health, economic and other adverse impacts of war on Yemeni children and civilians. He noted that four out of every five children are in need of humanitarian assistance, an estimated 11 million children. 400,000 children suffer from severe acute malnutrition and more than two million are out of school. Another four million are at risk of dropping out. More than 170,000 teachers, almost two-thirds of all the teachers in the country, have not received salaries for over four years, a direct result of the Yemeni economy collapsing due to the war. The economy has witnessed a fall in GDP by over 40% since 2015. According to Elder, more than 1.7 million children are now internally displaced persons due to the war.

The number of people who lack regular access to safe water, sanitation, hygiene has crossed 15 million, according to UN data. More than 80% of the population, approximately 20 million, is now dependent on international humanitarian aid for day-to-day survival. An estimated four million of them are internally displaced. The rising death toll in the country has already crossed 230,000.

The war in Yemen began in 2014 after the Houthis overran much of the north of the country, including capital Sanaa, and drove out the western and Saudi-backed government of Abd Rabbu Mansur Hadi . The war took a deadlier turn after the Saudi-led Gulf coalition’s military intervention in Yemen in March 2015. Indiscriminate airstrikes launched into Yemen by the coalition, many of them on heavily civilian populated areas, caused massive death and destruction. Of the approximately 22,000 air and drone strikes, many ended up targeting and demolishing schools, hospitals, refugee camps and factories, killing thousands of Yemeni civilians.

The UNICEF representative alluded to this destruction, noting that “while displacement and the destruction of schools have meant classrooms can have as many as 200 children in them, teachers turn up. Yes, unpaid teachers turn up and teach.” He concluded his statement by saying, “the bottom line: children in Yemen are not starving because of a lack of food—they are starving because their families cannot afford food. They are starving because adults continue to wage a war in which children are the biggest losers. UNICEF urgently needs more than US$235 million to continue its life-saving work in Yemen till mid-2022. Otherwise, the agency will be forced to scale down or stop its vital assistance for vulnerable children.”