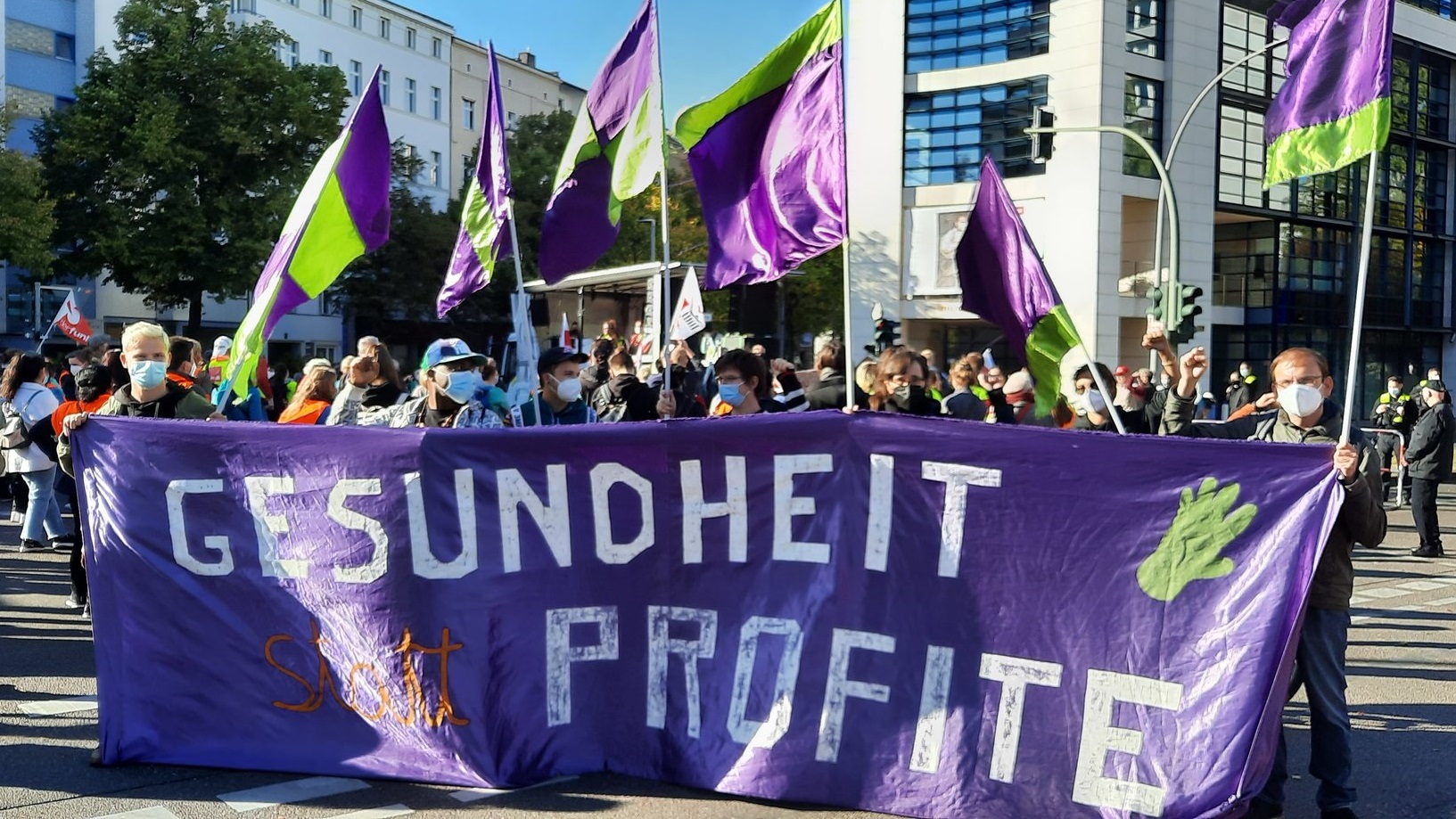 On October 12, health workers at Vivantes Hospital Center in Berlin suspended a weeks-long strike after their trade union secured key points for a collective bargain, which should be drafted by the end of November. Earlier this month, health workers from Vivantes and Charité, Berlin’s second-largest hospital group, had taken to the streets to protest the heavy workload, mostly caused by a lack of staff. They mobilized under the banner of the Berlin Hospital Movement.

Their protest brought almost 5,000 people to the streets, including nurses, midwives, technical and laboratory staff. Education workers from the German Education Union (GEW), couriers from the platform Gorillas, and activists who are campaigning for fairer housing conditions in the city also joined them. The support for the protest is notable given that it was organized after several weeks of strike actions in the two hospital groups. The coordinated action between the workers from Vivantes and Charité seems to have borne fruit.

The idea of the workers of the two large Berlin hospital groups setting out together is not new. It first took concrete shape in the early stages of the pandemic, when they demanded the Corona Hospital Pact – health protection, more staff and recognition for their work. Together, the workers also took part in the warning strikes during the TVöD (collective bargaining round for the public service) late in the summer of 2020.

At the beginning of 2021, things really took off. Members of ver.di, the German trade union of Services, at Vivantes and Charité were asked whether they wanted to take part in a dispute for more staff and, in the case of Vivantes, for the TVöD for outsourced subsidiaries, who are in a significantly more precarious position than permanent staff, as they wok without a collective agreement. The trade union subsequently organized training for activists, who then collected signatures in their departments for a majority petition with the workers’ demands.

On May 12, the International Day of Nursing, the workers handed over 8,397 signatures – a majority of all employees covered by the TVöD – on a large poster to politicians and the management of Vivantes and Charité, and gave them an ultimatum of 100 days. They said that either they get a collective agreement for better staffing and relief of workload, and the TVöD for the subsidiaries, or there would be a strike. During these 100 days, workers established contacts with politicians and civil society. At the same time, they agreed on key measures needed to improve their situation, as well as team demands. The workers’ delegates, about 1,000 of them, finalized the demands on July 9 at the Union Berlin Stadium, and set out an outline of steps to be taken.

Next, a series of warning strikes was organized in August, through which the trade union confirmed the workers’ willingness to strike. Vivantes tried to prohibit the strike with three court injunctions. This strategy backfired as it only helped the workers’ demands gain more traction. When there were still no serious offers by management after the summer actions, workers held a strike ballot. There was a 97-98% support for the industrial action.

On September 9, the open-ended strike began at Charité and Vivantes and a few days later at the subsidiaries. Both employers were not willing to sign emergency service agreements. Since a strike in a hospital is not comparable to one in, say, an industrial plant, emergency service agreements are made to ensure that patients are not put at risk. The best way to ensure no harm is suffered by patients is if there are no patients in the beds.

It can be argued that the strike at Vivantes was even stronger than at the Charité. In Charité, two wards were closed, while at Vivantes, 16 wards were completely empty and many beds were closed.  At the level of subsidiaries, negotiations will continue over the next period, moderated by Matthias Platzeck, former prime minister of Brandenburg. Meanwhile, the strike will continue.

The pressure that the strike applied on politics was really effective. With upcoming elections for the Berlin city parliament, the trade union assumed that in state-owned companies like Vivantes and Charité, the pressure would be strong enough to ensure that the workers’ demands were met. There were countless talks with politicians. Workers and trade unionists attended election campaign events. Throughout the election campaign they organized actions, meetings and demonstrations. The support from civil society for the health workers continues. The alliance Health Not Profits, built in 2015 during a first strike for load removal at the Charité, has been actively supporting the protests. There were also clear commitments from politicians, especially the ruling coalition in Berlin comprising Social Democrats, Greens and the Left Party.

However, in the election campaign itself, the issue did not become decisive, even though the workers wanted it to. Also, during the campaign it turned out that the influence of individual politicians on the municipal hospital companies is rather small. Despite many promises by individual politicians to influence the hospital management, it did not result in any concrete financial commitments, like  covering extra expenses for reduction of workload from the state budget. The owner – the state of Berlin – was not prepared to take that commitment.

Even though the last goal – a collective agreement for the subsidiaries has not yet been won, the Berlin Hospital Movement has already achieved a lot: the cornerstones at Charité and Vivantes, but also the development of workers’ structures. The structures of the Berlin Hospital Movement are now characterized by a lot of communication among workers and a high level of transparency. For example, the collective bargaining committees of Vivantes and Charité held their meetings together until the negotiation phase began, and at times also included the bargaining committee of the subsidiaries. The bargaining committees were never alone in the long negotiations – the team delegates were always nearby. This means that the demands of the teams were included in the negotiations, and there was feedback from the team delegates during all stages of the negotiations.

The approach taken by the Berlin Hospital Movement strengthened the workers’ cause immensely. Now, Berlin’s hospital workers are taking their concerns into their own hands, they are no longer prepared to work under these conditions nor accept unequal pay.

Silvia Habekost is a nurse at Vivantes Hospital Centre and union activist in the Berlin Hospital Movement (BHM). Her earlier analysis of the BHM was published in AK Analyse und Kritik on 10 October 2021 (German only).

The translation and adaptation of the German version of this text was provided by Andreas Wulf, a doctor and health activist at Medico International. 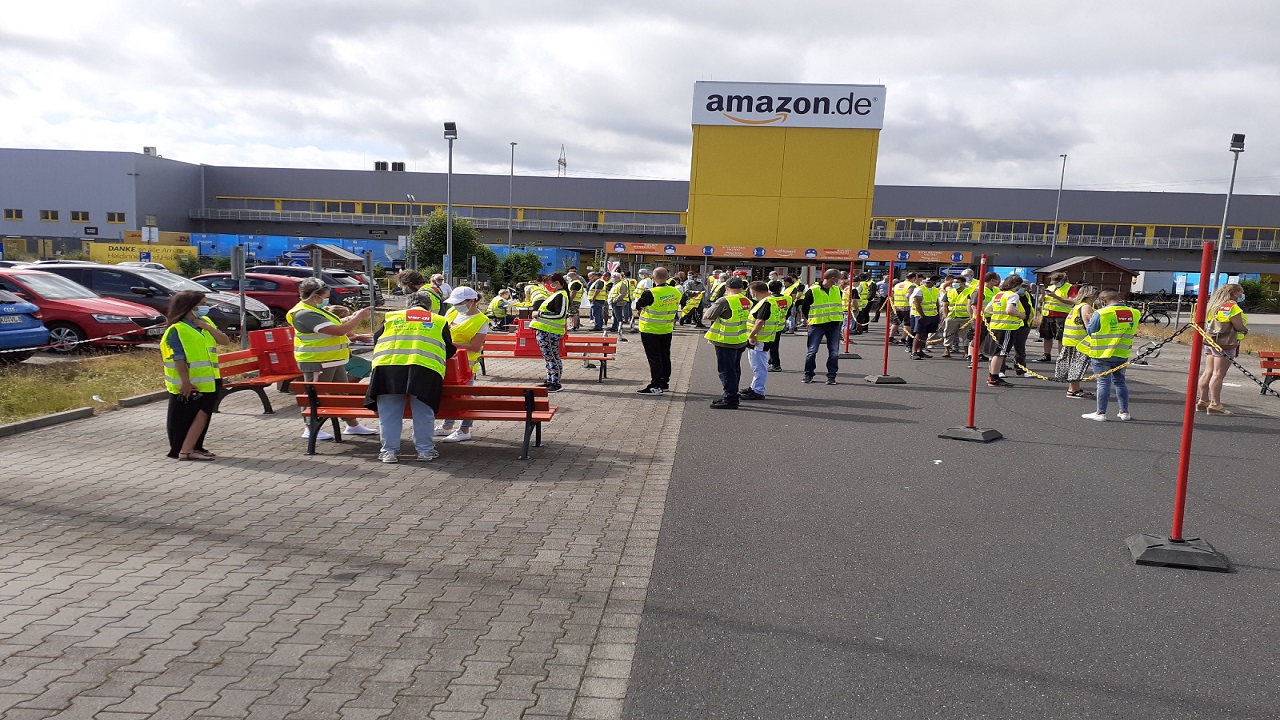