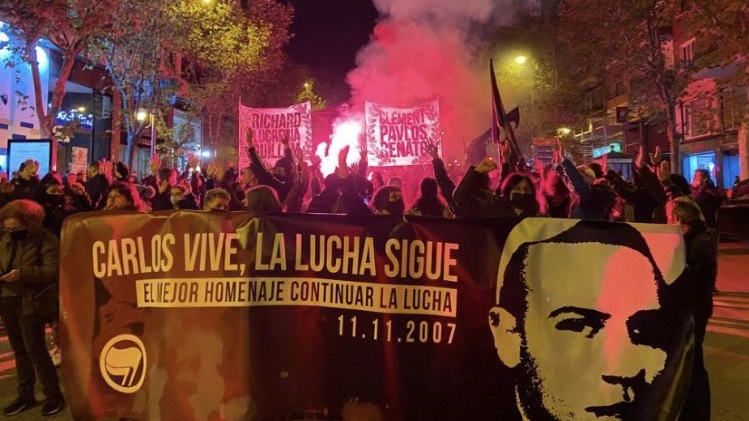 A rally in Madrid to honor the memory of Carlos Palomino Munoz. Photo: Rebeldía Vallekana

On Thursday, November 11, thousands of youth joined a march in Madrid called by various anti-fascist groups in Spain, commemorating the 14th anniversary of the martyrdom of Carlos Palomino Munoz. Groups including the Mothers Against Repression, Movement Against Repression-Madrid, Anti-Fascist Coordination of Madrid, Castilian Left (IzCa), EMT Trade Union, and communist parties and youth movements took part.

On November 11, 2007, Carlos Javier Palomino, a 16-year-old student, was killed by a pro-fascist Spanish soldier named Josué Estébanez de la Hija in Madrid. The murderer, who was going to a demonstration of a far-right party called National Democracy, stabbed young Carlos on a train. Carlos Javier Palomino and his friends were on their way to participate in an anti-fascist rally to counter the rally called by the National Democracy. After a two-year-long trial, the Provincial Court of Madrid sentenced Josué Estébanez to a total of 26 years in prison which was later confirmed by the Supreme Court. Since 2007, every November 11, anti-fascist groups in Spain organize  demonstrations to pay tribute to Carlos Palomino. Following the murder, Palomino’s mother, Mavi Munoz, founded the Association of Victims of Fascist, Racist and Homophobic Violence to carry on the struggle against far-right and extremist groups.

Ruptly quoted a participant of the march as saying, “Today, 14 years later, Madrid and its neighborhood are back on the streets to remember Carlos Palomino, because the best homage will always be to keep fighting, to fight for the present and build the future you dreamt of, we all dreamt of, with the strength your heart was full of. They wanted to kill you, brother, but you’re a seed. And this seed keeps growing in every corner of this city, in every assembly, in every comrade, in every youngster on the streets, in every mother who fights for the future of her family, in every trench, in all those who put their bodies to stop this barbarism.”