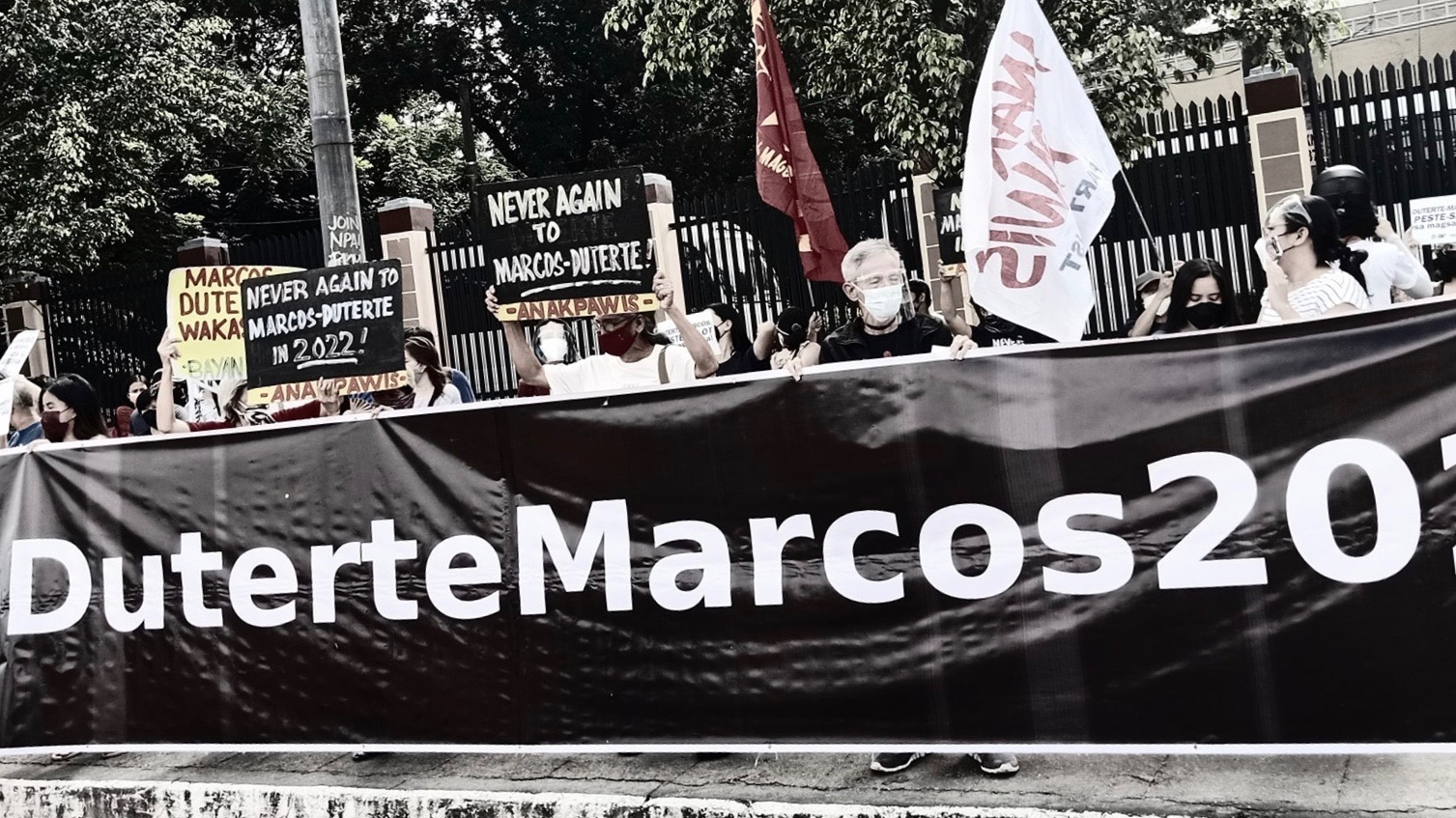 Demonstration held by rights groups outside the Philippines Commission on Human Rights against the “Duterte-Marcos Tandem” on November 14. (Photos: Katribu Youth)

After weeks of speculation, the alliance between Ferdinand ‘Bongbong’ Marcos Jr., son of former Filipino dictator Ferdinand Marcos, and Sara Duterte, daughter of incumbent president Rodrigo Duterte, is now official. The alliance was announced over a video message by Sara Duterte, currently the mayor of Davao City, on Tuesday, November 16.

Mayor Duterte’s announcement was confirmed by Marcos Jr, who later issued a statement announcing that the two and their respective parties, Partido Federal ng Pilipinas (PFP) and Lakas-CMD, will fight together in the upcoming general elections.

As per the announcement, while Marcos Jr. will continue his presidential bid, Sara Duterte will file her nomination for the vice-president’s post as his running mate. Meanwhile, president Duterte, who had announced his retirement from politics last month, has taken a u-turn and will be contesting for a senate seat in the elections scheduled for May 9, 2022.

Since November 2020, opinion polls in the Philippines have projected both mayor Duterte and Marcos Jr. as the two most popular candidates for the presidential post. If the alliance wins the election, it is expected to continue the ongoing “war on drugs” that is estimated to have led to thousands of extrajudicial deaths across the Philippines.

The alliance also poses a major challenge for the divided progressive and centrist opposition. The opposition is currently divided between two candidates, Isko Moreno and Leni Robredo, who are among the only other major candidates in the presidential race with widespread popularity.

Despite the odds being in their favor, the election is not expected to be a cakewalk for the Marcos-Duterte alliance. The two candidates are expected to defend the legacy of Rodrigo Duterte. However, neither Sara Duterte nor Marcos Jr. belongs to president Duterte’s Partido Demokratiko Pilipino – Lakas ng Bayan (PDP-Laban), the ruling party and the largest in the Philippine congress, whose support will be crucial for the upcoming election.

The PDP-Laban is currently facing a crisis of its own with splits and factions competing against each other for the presidential nomination. While still a popular face, president Duterte’s popularity has taken a hit during the COVID-19 pandemic. One of the world’s harshest lockdowns, as well as alleged mismanagement of the counter-pandemic efforts and vaccination program, have affected Duterte’s standing.

Even though they belong to different parties, both Sara Duterte and Marcos Jr. have supported the Duterte administration in some of its most controversial policies, including the deadly “war on drugs” that is estimated to have killed thousands. Marcos Jr. had also promised that if elected, he would grant Duterte immunity from possible prosecution on charges of crimes against humanity and human rights violations under his administration.

Meanwhile, social movements have been voicing their opposition against the return of another Marcos presidency in the Philippines. On November 17, a petition was filed by victims and survivors of Ferdinand Marcos’ martial law period, along with religious activists and rights advocates. The petition was filed by the Campaign Against the Return of the Marcoses and Martial Law (CARMMA) before the COMELEC.

A similar petition was filed by another group of rights advocates earlier this month, which is scheduled for a hearing on November 26. Both petitions argue that Marcos Jr. should be disqualified from running for any federal post because of his conviction on tax offenses in 1995, which was upheld by the Court of Appeals in 1997. The conviction is still standing, after Marcos Jr. withdrew his appeal against it before the Supreme Court in 2001.

According to the existing rules, any person convicted of tax offenses stands disqualified to run for any federal posts. But, Marcos Jr. has since served as a governor and was elected to the House of Representatives and the Senate. The petitions argue that he has misled the COMELEC about his disqualification despite a standing conviction.

In the run-up to the announcement on Tuesday, movements also expressed their anger and opposition to the Marcos-Duterte alliance. On Sunday, November 14, indigenous rights groups and other social movements held a massive demonstration outside the Commission on Human Rights office in Quezon City, with slogans that like “No to Duterte-Marcos tandem” and exhorted voters to say no to “Marcos restoration and Duterte extension.”

A statement released by one of the organizers of the protests, Katribu Kalipunan ng Katutubong Mamamayan ng Pilipinas, said, “it is now more than ever that we unite to defend our rights and democracy.” It called on people to “frustrate and end the Bongbong Marcos – Sara Duterte tandem” the organizers also insisted that Filipinos “must #NeverForget the atrocities of the Ferdinand Marcos dictatorship and the current regime’s disregard for peoples’ fundamental rights.”