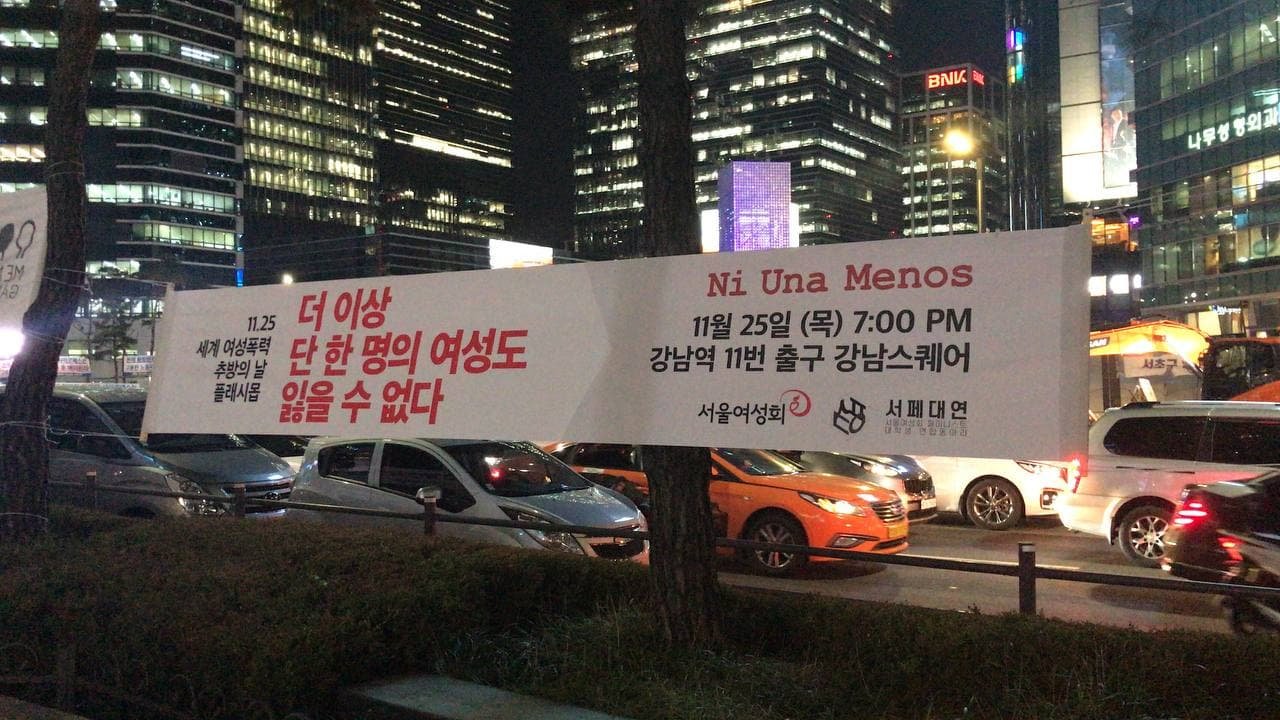 Seoul Women’s Association and the College Feminist Club Association performed "A rapist in your path" at the Gangnam Subway Station on November 25. Photo: ISC

November 25 is the International Day for the Elimination of Violence against Women. The date was first selected in 1981 to honor three sisters who had fought against the dictatorship in the Dominican Republic. In 2000, it was designated an international day by the United Nations.

The Korean government also designated the week for the elimination of violence against women in 1981, but reality hasn’t changed a lot since then. That is why the Seoul Women’s Association (SWA) and its sister organization the College Feminist Club Association decided to perform “Un violador en tu camino” (“A Rapist in Your Path”). The performance was created in 2019 by the Chilean feminist collective Las Tesis and spread to over 100 cities around the world.

In the evening of November 25, our performance was carried out in an open space near Gangnam Subway Station, where in 2016, in a nearby public restroom, a woman was stabbed to death by a man she’d never met before. The perpetrator later claimed that he did so out of his hatred against women as they had ignored and humiliated him all his life. Women in Korea responded by spontaneously posting countless sticky notes at the subway station exit, sharing their fears, frustrations, and anger about the violence against women and an impotent justice system, which failed to take into account the gender element in their investigation.

Participants gathered by Gangnam Station wearing various costumes: one of the female characters in Netflix’s Squid Game, a teenage student, a nurse, a cook, a mother, a soldier, and many others representing the diverse women in Korean society. The message was that a woman’s clothing should not be an invitation for violence as stated in the chant they performed: A Rapist in Your Path.

This simple but powerful performance drew much attention from passers-by. The number of audience members and performers grew as the event progressed. After the performance, performers shared their messages of solidarity.

A college student asked for a moment of silence for the women who’d recently lost their lives to dating violence. An activist working for a district ordinance to improve the safety of women living alone said, “Residents shared their experiences of break-ins or of being followed by strangers or ex-boyfriends.” The vice president of the SWA lamented the reality that the country doesn’t even have any clear statistics on gender violence and called for the Korean president and politicians to stand up and keep their promises. An anonymous participant stated, “I hope no other woman experiences the same thing I have gone through.”

The event ended with a statement:

Today is the International Day for the Elimination of Violence against Women. We gathered here because we can no longer stand the violent rampage against women in the Republic of Korea in 2021, and because we do not want to lose any more women. 40 years have passed since the day was first honored in 1981. Can we say with certainty that Korean society has become safer for women?

No more discrimination or violence should be committed against women just for being women. And we need to speak up that the violence is committed by the social structure.

A murderer is politics which instigates hatred against women. The ruling Democratic Party’s presidential candidate has shared a misogynist internet posting, and his party points fingers at feminism for its falling approval ratings… The conservative party’s presidential candidate promised to strengthen the sentencing for making a false accusation while blaming women’s social activities for decreasing morale in the military…

A murder is patriarchy under which women are openly insulted because they said they wanted to go home safely… Violence against women occurs because society accepts it.

That’s why we are gathered here at Gangnam Station.

We have changed the world via the Me Too movement and after the Gangnam Station murder case.

The Me Too movement awakened society to the reality that sexual violence is everywhere, and we stood together with those who came forward. We gathered at Gangnam Station to change a society where women become victims of violence simply for being women…

Here, today, we gathered again to raise our voice against the violence we experience and to fight against gender violence. Standing up against all violence that suppresses and silences women, we need to smash the system that enables this violence. We need to change from the foundation: the gendered power relationship itself must be smashed.

We have sisters all around the world. From Chile and Argentina to Germany, sisters rose and stood together with this performance. We want to send our solidarity to the sisters around the world. We will not take it anymore. We will not be silenced. We will not buy the sugar-coated promises of politicians, or lies from the authorities because we cannot lose another woman. For next year’s presidential election and for the future, we will keep fighting to make the country safer for women.

Translated by Tae-eun Shim of the International Strategy Center, a South Korea-based organization that focuses on studying international issues and carrying out solidarity activities.