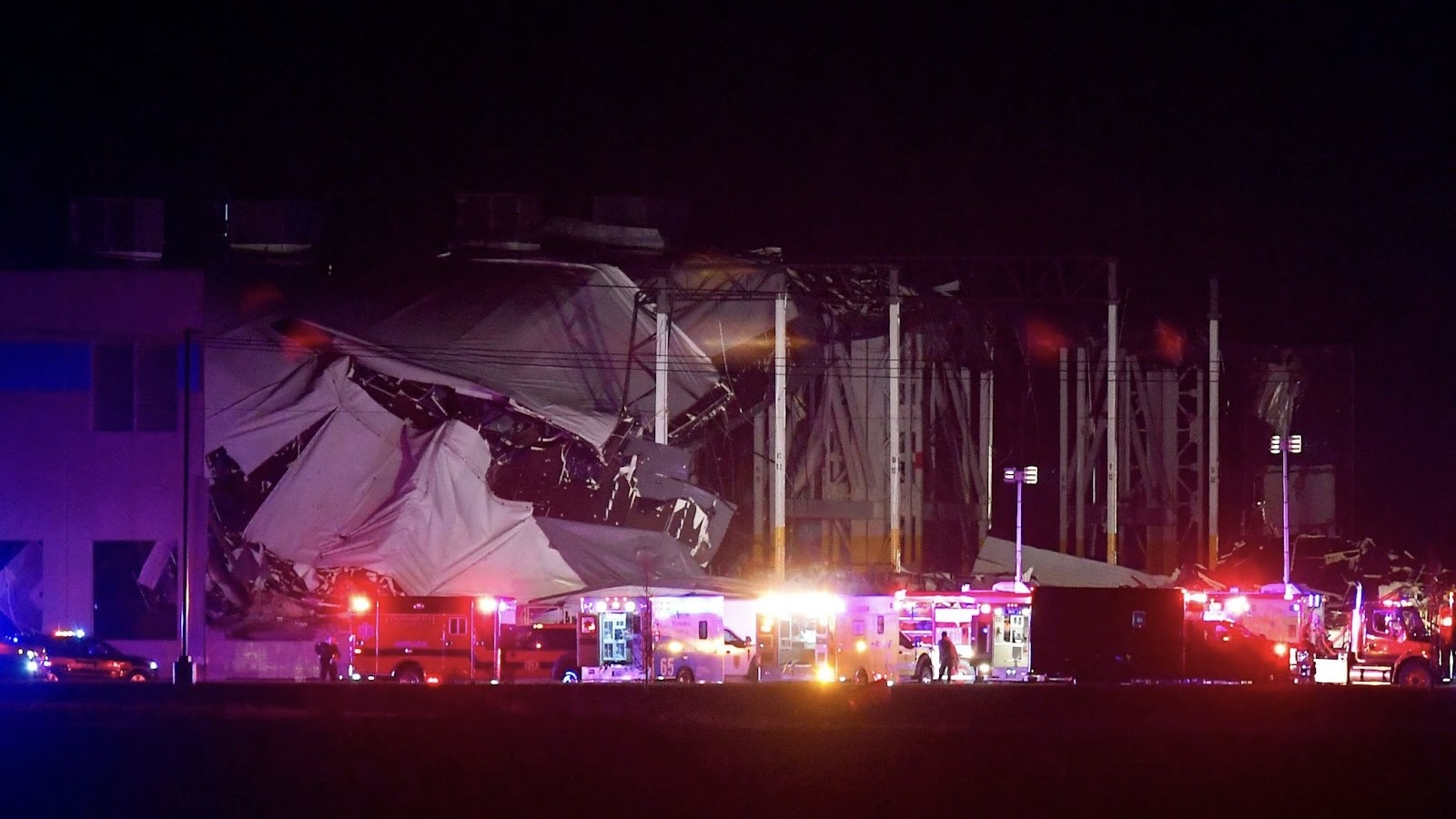 The warehouse in Edwardsville, Illinois after a category EF3 tornado hit it on December 10. Photo: Twitter

At least six people have been killed and countless others injured during a partial collapse of its Edwardsville, Illinois warehouse on the night of December 10. A category EF3 tornado hit the warehouse around 8:35 pm. The “search and rescue” mission through the remaining rubble has changed to a “search and recover” mission, suggesting that officials believe there are no survivors.

At 17:00h that day, the National Weather Service issued a tornado watch for counties in Missouri and Illinois, which included Edwardsville. At 20:00h, it updated the alert to a tornado warning.

Despite this, the warehouse continued its operations at full-speed and asked employees to wait out the storm inside. One of the victims, Larry Virden, texted his girlfriend, “Amazon won’t let us leave.” He left behind four children.

Despite this, the warehouse continued its operations at full-speed and asked employees to wait out the storm inside. One of the victims, Larry Virden, texted his girlfriend, “Amazon won’t let us leave.” He left behind four children.

Horrifying details are emerging about the tornado disaster at Amazon's warehouse in Illinois, where at least 6 workers were killed on the job.

Before he died, Larry Virden reportedly texted his girlfriend: "Amazon won’t let us leave." He leaves behind four children. pic.twitter.com/3ZRLik9VIs

The Edwardsville facility, also known as DL14, opened in July 2020, as part of a massive expansion of Amazon warehouses during its pandemic profit boom. As its profits have multiplied, its worker safety standards have fallen below the industry average.

Amazon has been known to keep its employees working in dangerous conditions, like in deadly heat waves without proper air conditioning or water.

The Strategic Organizing Center report points to the culprit, “The company’s obsession with speed has come at a huge cost for Amazon’s workforce.”

Hours after the tragedy and deaths were reported, former CEO Jeff Bezos posted himself celebrating his space company’s celebrity rocket launch. Later, he tweeted that he was “heartbroken” over the news. Amazon Worldwide Consumer CEO Dave Clark tweeted out his “thoughts and prayers.”

Workers and organizers with the Illinois-based Worker Outreach Program, an initiative by Warehouse Workers for Justice, have called on the state’s legislature to convene a hearing to “ensure all Amazon facilities are places of safety for workers.”

Their statement on the tragedy says, “While natural disasters are not controllable, Amazon’s preparedness and safety protocols are. This disaster calls into question Amazon’s record on worker safety and building standards.”

It continues, “A tornado might be a rare and extreme event, but Amazon’s disregard for worker safety is a chronic pattern that puts workers in danger every day.”