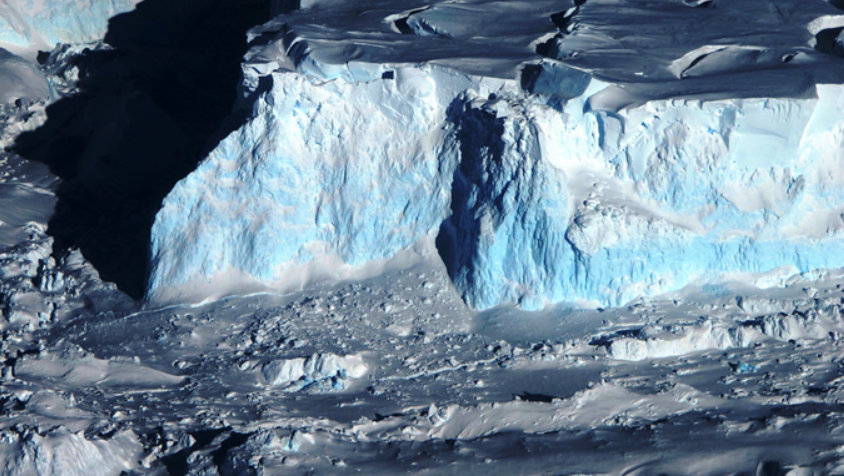 Thwaites Glacier in Antarctica is an important ice reservoir. Its destruction can pose a serious threat in the form of global rise in sea-level which is already happening. The glacier is responsible for about 4% rise in the global sea-level. It has a huge ice shelf which slides into the ocean in the form of a floating ledge of ice with a width of 45 kilometres.

But, the danger bell has been sounded as scientists have found that the huge ice shelf is likely to break apart within next five years or so. Scientists reported newly detected fissures on the surface of Thwaites at a meeting of the American Geophysical Union.

The most significant sign of the crack is the set of diagonal fractures spanning the entire ice shelf. Commenting on the findings, Erin Pettit, a glaciologist at the Oregon State University and a part of the study on the glaciers said, “ Last month, satellites spotted accelerating movement of ice along the fractures. The shelf is a bit like a windshield with a series of slowly opening cracks. “You’re like, I should get a new windshield. And one day, bang—there are a million other cracks there.”

When the ice shelf shatters, the large sections of the glacier restrained by it may disintegrate and melt more quickly. According to Pettit, the worst scenario can cause the speeding up of this part of Thwaites contributing to a global sea-level rise of about 5% in a short term. It appears, therefore, that an impending catastrophe is near around.

Even more worrisome is the warming of water beneath the ice shelf which the scientists had detected with the help of a robotic submersible. The interesting part of Thwaites is that it sits below the sea-level on the ground which is away from the coast. The warming ocean water is going to melt the glacier from beneath. Some scientists believe that the total collapse of the glacier is possible and is only centuries away, which would bring a sea-level rise of around 65 centimeters.

The team of researchers, including Pettit, is part of the International Thwaites Glacier Collaboration (ITGC) which aims to explore the future of the key glacier. The ITGC is a multi-layer program supported by the US and the United Kingdom. The Thwaites glacier is far from any other research stations and to reach there is a real challenge. The ITGC’s first expedition, in the summer of 2019-20, also met with severe challenges of heavy storms.

The Thwaites researchers’ team put their findings on the ground to computer models of the ice shelf. They have detailed their models about Thwaites in the journal Cryosphere. The models predicted that extensive cracks on the surface have been seen in the past five years which have been opened by melting ice. Several cracks were found to be approaching the center of the Thwaites glacier.

For example, one of the cracks that has been named ‘the dagger’ is now extending to the middle of the ice shelf. According to Pettit, once in the middle, the cracks may trigger incipient cracks in the valleys underneath to grow and weaken the shelf further.

The latest cracks that have been observed by the team appear in the form of diagonal fractures that span more than 40 km. With the alarming rate of failure of the ice shelf, Pettit cautioned about the possible dangers: “The ice shelf failure will be a warning that Thwaites, and the rest of the West Antarctic Ice Sheet, could begin to see significant losses within decades, especially if carbon emissions don’t start to come down. We’ll start to see some of that before I leave this Earth.”

The Arctic is warming much faster than thought earlier
RECENT ARTICLES