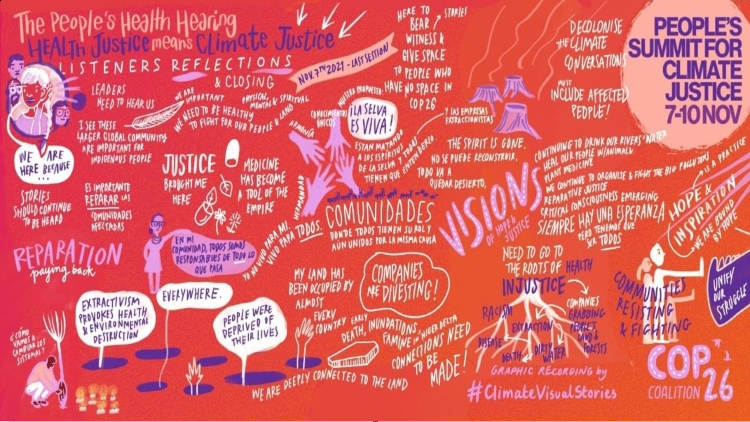 Within the greenwashed walls of COP26, it was barely recognized that systems of exploitation fuel the climate crisis, and that these same systems are drivers of poor health and inequality across the world. The climate crisis is a symptom of a world that is sick with extractivism, made possible by hierarchies of oppression such as colonial capitalism, patriarchy, white supremacy, ableism and class divide.

As the organizers of the People’s Health Hearing at COP26, we aimed to create space for this perspective, where communities that are already affected could share their struggle and be heard. At the hearing Kanahus Manuel reflected that “collective intelligence is so important to use so we can tell stories to our people,” particularly for indigenous voices who are often silenced.

We often hear depictions of the climate crisis causing health impacts. Yet, this fails to acknowledge the striking impact of climate violence today, where the root of disaster is not in the atmosphere. The same food systems which drive poor health also destroy ecosystems, release ⅓ of global emissions and steal the land of indigenous people. The same oil companies which fuel the climate crisis fuel conflict, violence and pollution in areas of extraction. As highlighted by Raki Ap from the Free West Papua campaign – “over 500,000 indigenous West Papuans have lost their lives in the last 60 years…due to colonization…supported by the western governments and their extractive industries”.

We hoped to show how environmental breakdown is the salt that we pour into our existing wounds. The painful wounds are nothing the intersecting forms of oppression that have existed for centuries and continue to remain inflamed today.

To celebrate the ‘right to health’ as an add-on to the Glasgow Climate Pact would be to ignore the co-option of health by perpetrators for greenwashing. Strategies rooted in solidarity to treat the sickness of an extractive economy, neo-colonisation and oppression is the only way to succeed.

If we are not disrupting these conditions that maintain sickness, then we are participating in upholding them. As said by Tamman Aloudat at the hearing, “Medicine needs to be part of liberating and taking off the effort to control people when they are vulnerable. It cannot happen without all of us: people who are affected first, and those who help them, rejecting the thought that we know better than people themselves”.

Inequitable distribution of energy and resources

The problem is not only our ongoing reliance on fossil fuels, but the inequitable balance of whom our energy system serves. For more than half a century, so-called ‘development’ in the global north has been based on the exploitation of people and land in the global south. Ninety-two percent of excess CO2 global emissions come from the global north, and globally, the richest 1% of people are responsible for double the emissions of the poorest 50%. Within global north countries like the UK, the poorest face devastating fuel poverty, whilst the richest grow richer off the destruction of the planet. Goran Zangana, who gave testimony at the hearing from the Kurdistan region of Iraq, summed it up – “health of people and planet is linked, and that link between is greed.”

Tackling the climate crisis requires rich countries to start rapidly and equitably decarbonising their energy systems. One analysis found that the UK’s ‘fair share’ of 1.5 degrees would involve 200% decarbonization by 2030. Instead of acknowledging this debt, at COP26, the global north scapegoated India and China for the watering down of the final text on coal from “phase out” to “phase down”, whilst hiding their refusal to accept the original proposal from India that ‘all fossil fuels be phased out equitably’. This focus on coal has meant that rich countries – many of which have already transitioned away from coal to oil and gas – have no commitment to ending oil and gas expansion.

The colonial vision of ‘development’ requires the endless extraction of all resources, including fossil fuels for economic growth, consumerism and materialism.

Throughout the hearing, speakers like Ken Henshaw highlighted corporate greed as a root cause – “The patterns are the same. Companies are grabbing everything.”  Alternative visions of development, based on renewable energy, sharing of the commons, and enabling the healthy flourishing of all are consistently crushed. Noemí Gualinga highlighted how indigenous people “are being seen as bad communities that want to stop ‘development’”. Meanwhile, at COP26, the Free West Papua campaign launched their Green State Vision, to “restore, promote and maintain balance and harmony amongst human and non-human beings, based on reciprocity and respect towards all beings”.

We cannot continue to violently extract from the earth in the pursuit of growth and material consumption, destroying the health of both the planet and all living on it. For a healthy planet, de-growth from the richest (i.e. a reduction in resource use) must be combined with efforts to heal our relationship with the land, with other species, with fellow humans and with ecosystems. As highlighted by Tatiana Garavtio at the hearing, a tool for this is climate reparations, where the extractors who are most responsible both historically and today pay monetarily and repair damage holistically. At COP26, conversations on loss and damage were sidelined and pushed until next year, and while climate adaptation funding was raised, these commitments are often not met or come as loans.

As said in 1994 in a statement from the Indigenous Environmental Network, “cultural survival depends on healthy land and a healthy, responsible relationship between humans and the land.” At the People’s Health Hearing, Pacca Turner spoke of how we must reimagine what health truly means. We must demand a transition towards societies built on community, on reciprocity with nature, on mutual flourishing, and cooperation.

The solutions will not come from billionaires or from the inside of COPs. They will come from people on the frontlines, like the people who were part of our People’s Health Hearing at COP26. As said by Simmone Ahiaku at the hearing, “Climate justice in the context of abolition is considering a future that is people-centered, valuing our interconnectedness. Liberation is not about what we think is possible today, but broadening our ability to consider WHAT is possible.”