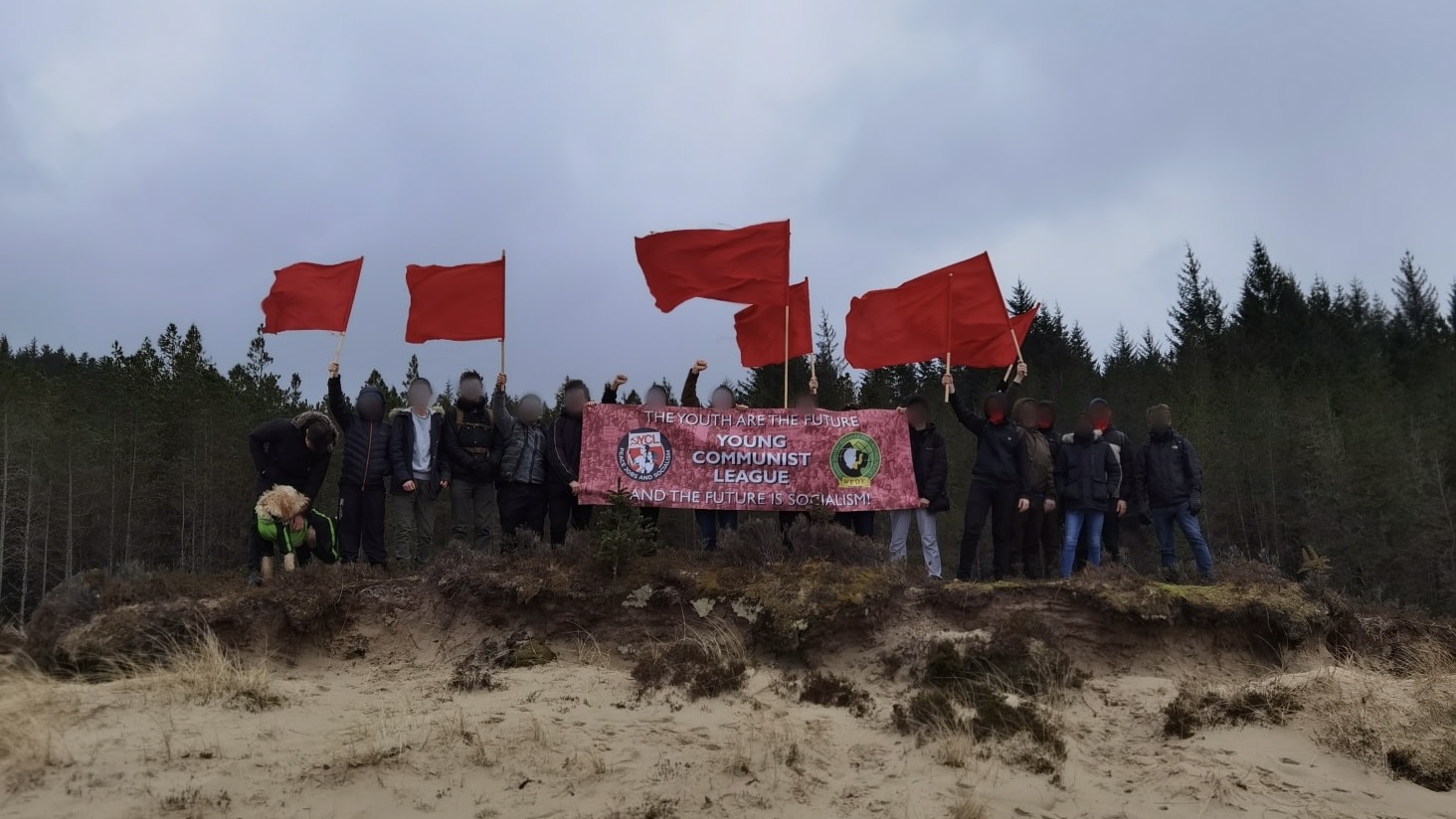 Cadres of the Young Communist League(YCL) at “trespass” action on the Ardnamurchan Estate. Photo: YCL

In the last week of January, members of the Young Communist League (YCL) of Scotland organized a mass trespass action on the Ardnamurchan estate in the West Highlands. The action was organized to support a campaign by Ramblers Scotland, an organization that speaks for hillwalkers and advocating for equal access to the Scottish countryside.

The members of YCL organized a 10 km walk through the Ardnamurchan estate, owned by businessman and landlord Donal Houston who has been trying to shut off part of his estate to the hillwalkers in the area. Currently, Ramblers Scotland and the Highland Council has been engaged in a court battle against Donal Houston’s attempts to restrict the hill walkers and locals from accessing paths running through his large West Highland estate.

The young communist activists also questioned the existing feudal-like land ownership structures in modern-day Scotland. Morning Star reported that, according to a 2019 estimate fewer than 500 people own around half of Scotland’s privately owned land.

The Land Reform (Scotland) Act 2003 outlines the right to roam which allows everyone to access most land and inland water in Scotland for recreational and other purposes. In 2019, two walkers were reported for ‘aggravated trespass’ while walking peacefully in the Ardnamurchan area. Following this, landowner Donal Houston has reportedly been trying to shut off part of his estate by legally excluding it from the purview of Scotland’s right to roam, using the loopholes in the Land Reform Act 2003. According to observers, a favorable verdict for Donal Houston, will set a dangerous precedent that will help the Scottish landlords to undermine people’s right to roam.

Ramblers Scotland director Brendan Paddy has stated that the “lawsuit against Donal Houston is a landmark legal case featuring an historic and important path. If we don’t fight to save the route, it’ll be a significant blow to our hard-won access rights and walkers will be banned from parts of this beautiful trail forever.”

The Young Communist League wrote in a statement that “Donal Houston is attempting to shut off part of his estate, making it exempt from Scotland’s Right to Roam legislation, and denying access to the land from the public. The YCL will continue to support Ramblers Scotland in any way we can in their fight against private land ownership.”

The YCL’s action on the Ardnamurchan estate builds on their historical legacy of organizing, specifically the Kinder Scout trespass action on April 24, 1932, which has been hailed as one of the most successful acts of civil disobedience in British history. The action organized 90 years ago which saw 400-600 people participate was done under similar auspices: to highlight the restrictions posed to walkers and in a sense challenge the extent of the concept of private property.