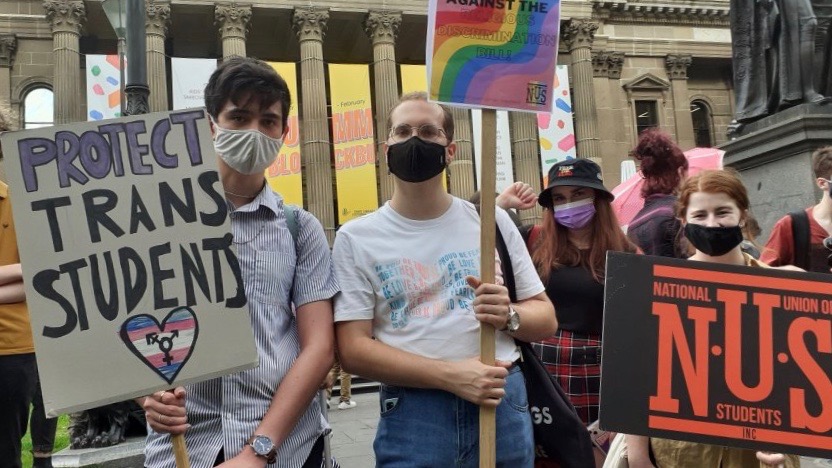 After pushing through the controversial Religious Discrimination Bill in the House of Representatives, the conservative Scott Morrison government in Australia has put the bill on hold indefinitely. In an announcement last week on February 10, the Morrison government decided to indefinitely delay a vote on the bill in the Senate, barely hours after it was passed in a marathon round in the House of Representatives. The bill was widely criticized as an attempt to give free rein to religious groups to discriminate against sexual minorities.

In the overnight debate on the bill that went on for several hours, five MPs from the ruling Liberal-National Coalition cross-voted in favor of one of the several amendments to the bill tabled by the opposition and cross-bench legislators. According to The Guardian, it is one of the biggest parliamentary revolts in the ruling bloc since 1982.

The five MPs – all from the Liberal Party – decided to back an amendment that would remove planned changes to the Sex Discrimination Act. The government’s version of the bill sought to do away with federal protections against discrimination based on sexuality, gender and marital status, among other things.

The House amendment would effectively water down one of the original purposes of the bill, which was to shield businesses and institutions labelled “public benevolent institutions” that are run by religious organizations from federal anti-discrimination protections. This would allow these organizations to openly practice discrimination in the name of religious beliefs.

LGBT+ groups and feminist organizations have been protesting this since 2019 when the original version of the bill was first introduced. The opposition backlash and the revolt by the five MPs last week was in response to this long-standing resistance by rights groups.

In the meanwhile, conservative Christian organizations have been pushing the government to include more exemptions from federal and international human rights regulations. The bill, in an earlier version, would have even allowed discrimination based on religious affiliations of a person’s spouse and other family members. For instance, a Christian teacher married to a Muslim could be excluded from recruitment if an institution were of the opinion that it violated the basic tenets of their faith.

“Despite attempts by the Morrison government to make concessions major issues remained in the bill. They included provisions to prevent denial of accommodation and medical services, and also expulsions of existing students and teachers in schools.

Attempts were also made to present the bill as a way to supposedly protect religious rights by allowing faith-based institutions to prioritize people of their denominations over others in recruitment and services. And yet the bill was criticized of furthering discrimination by rights groups.”

“The bill does more than simply build defenses into existing discrimination laws, it preferences rights based on religion over and above the equality rights that sit under the suite of other discrimination laws,” said Law Council of Australia representative Katherine Eastman, calling out the government’s attempts to frame it as an attempt to reinforce religious rights.

The bill would also have gone against the larger public opinion in Australia. Recent public opinion polls and the 2017 referendum on same-sex marriage showed overwhelming public support for protections for LGBT+ peoples against discrimination and harassment.

A YouGov Galaxy poll released earlier this month found that nearly two-thirds (65%) of those polled were of the opinion that it should be illegal for faith-based schools to expel LGBT+ students, while nearly 62% opposed expulsion of LGBT+ teachers. Even though the government did take the position to ban expulsions, it was accused of not accounting for possible denial of services and harassment that LGBT+ students and teachers might face.

Nevertheless, the new amendment was roundly attacked by Christian conservatives. Some like the Australian Christian Lobby, one of the biggest proponents of the bill in its original form, claimed that with the amendments, the bill now does “more harm than good” and supposedly interferes with the operation of faith-based schools and institutions.

The Australian Christian Lobby eventually turned against the entire legislation and not just the amendments. Other conservative groups who advocated for the bill, like the multi-million dollar Christian Outreach Centre, among others, also criticized the government for not doing enough.

The backlash from the Christian conservatives against the bill following the amendment was a matter of concern for Morrison who did not want to risk alienating them so close to elections. Labour’s shadow attorney general Mark Dreyfus called the shelving of the bill “a desperate attempt by Mr Morrison to cover up his humiliating defeat on the floor of the House.”

This also indicated that the government under Morrison is not much concerned about the more socially liberal factions within his ruling coalition, but is more keen on appeasing the rigidly conservative Christians who mobilize the coalition’s core voter base. This is especially important with growing criticism of the government’s handling of the Omicron-induced COVID-19 wave.

The Morrison government also indicated last week that it would prefer to restore the bill in its original form, with rights groups already raising alarm that the government could push for a fresh attempt in the near future, possibly after election.