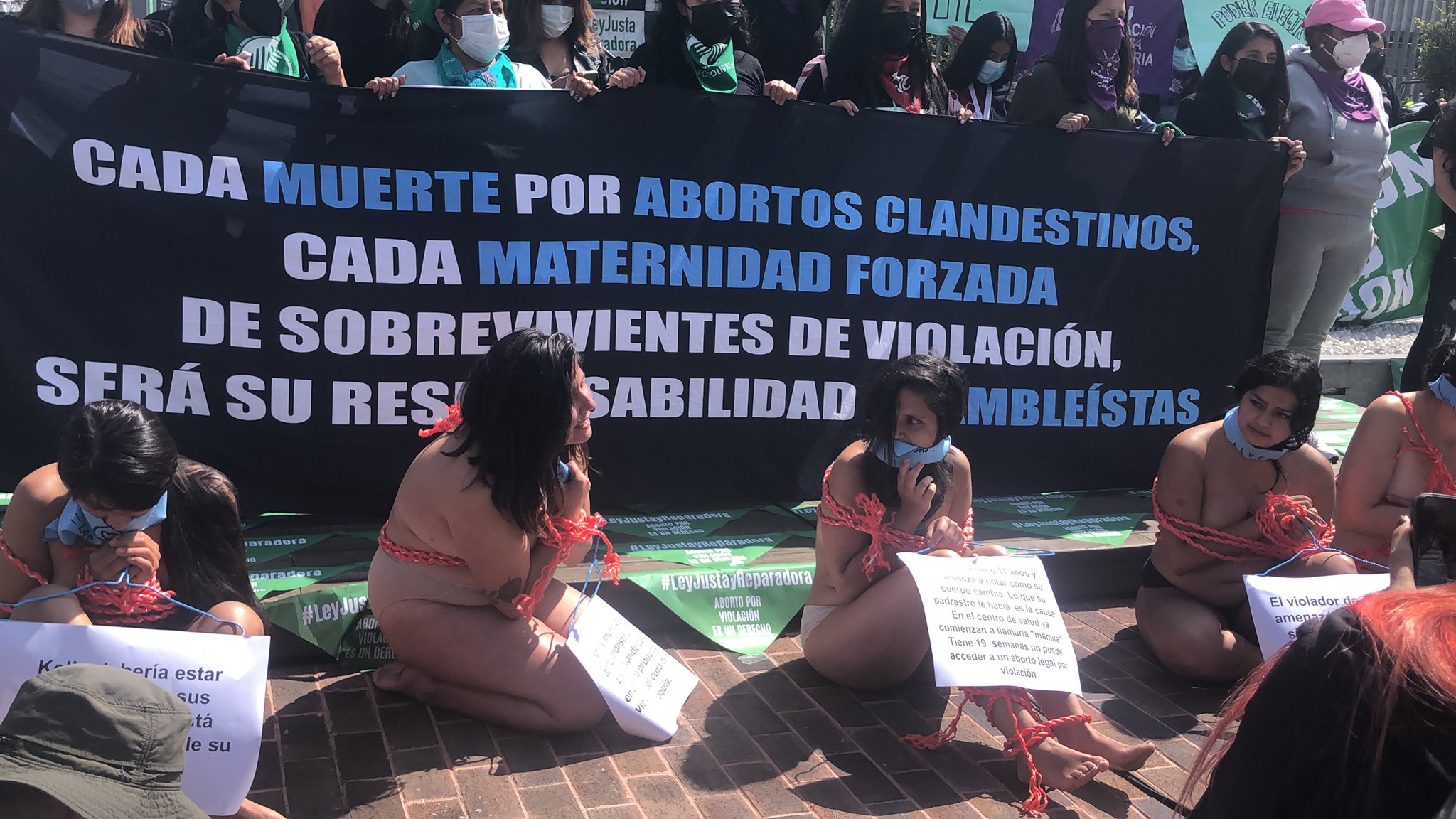 Dozens of women organized a sit-in in front of the National Assembly in the capital Quito on February 20, against the torture of clandestinity and forced motherhood. Photo: Surkuna/Twitter

On February 17, the National Assembly of Ecuador approved a bill that allows women and girls to access abortions when pregnancy is the result of rape, but with restrictions that were fiercely opposed by feminist organizations.

The measure, passed with 75 votes in favor, 41 against and 14 abstentions on Thursday, permits abortions up to 12 weeks of gestation for most adult women, with an extension of up to 18 weeks for minors and women in rural areas. Feminist and women rights movements, saluted the important advance but warned that the bill places dangerous restrictions on the fundamental public health right. The originally proposed time limit was up to 28 weeks of gestation but it was changed last minute. Movements condemned that the time limits set were too inhibitory and would force women to continue to seek clandestine abortions in unsafe conditions.

The bill was passed in the second attempt in the plenary. The first time, the original text failed to garner the 70 votes required and fell short of just 4 votes. Legislator Johanna Moreira of the Democratic Left party, the bill’s rapporteur, asked for a one-hour recess to make changes to the draft and submit it to a new vote. With a broken voice, she reported that they had lowered the limits and presented the bill again, which was eventually approved.

The approval came after the country’s Constitutional Court decriminalized abortions in such cases in April 2021 and ordered legislators to make necessary modifications in the existing law. Previously, Ecuador allowed abortions only when a woman’s life was at risk due to pregnancy, and when the pregnancy was the result of rape of a woman with a mental illness. The last time the assembly debated on the legalization of abortion in cases of rape was in 2019, but the voting was suspended due to lack of quorum.

Wambra Digital Community Media explained that the bill contradicted the Constitutional Court’s ruling, which ordered the lawmakers “to discuss the best technical standard and according to the best human rights parameters.” The alternative media outlet criticized that the country’s unicameral parliament sanctioned the bill “without considering the reality of Ecuador, where 3,000 girls under the age of 14 become mothers every year as a result of rape, and 15.6% of maternal deaths are due to clandestine abortions.” It highlighted that “in countries such as Argentina, Bolivia, Brazil, Colombia and Mexico, there are no time limits for abortion in cases of rape.”

Several reproductive rights activists and organizations denounced that the assembly failed to comply with its mandate to guarantee real and effective access to legal and safe to rape survivors. They criticized that the bill was neither “fair” nor “restorative” as they had been demanding.

Surkuna, an esteemed women’s rights organization in Ecuador, decried that “what happened today in the National Assembly of Ecuador was a bargain with the lives of rape survivors. This law is not fair, it is not restorative.” The organization lamented that “the assembly did not live up to this historic moment, once again,” but affirmed that it wouldn’t give up the struggle, stating “we will not stop. We remain organized and we will strengthen this green wave, so that it becomes a tide, until dignity becomes a habit.”

Ana Vera, Surkuna’s lawyer, deemed that deadlines as “torture” and said that they would not solve the problem of girls, adolescents and women in vulnerable conditions, as they cannot identify the pregnancy in time.

María Isabel Cordero, director of the Fundación Sendas, rejected “it is no fair, much less restorative, the abortion for rape law that today the National Assembly approved is unconstitutional. They did not respect the ruling of the Constitutional Court and not even the lives of girls and women who have demanded for months a law that facilitates their decision and access to a free and safe abortion.”

Feminist lawyer Lita Martínez Alvarado stated that “it is once again evident that the patriarchal system has its best acolytes in the Assembly. The political agreement and the negotiation on our rights is evident,” and stressed that “the fight continues today more than ever! Today we saw how in the National Assembly our bodies have been a negotiable commodity for the interests of a few. We will continue to fight, we will achieve a truly fair and restorative law better late than never!”

Erika Guevara-Rosas, Americas director at Amnesty International, also condemned the decision. “The National Assembly of Ecuador approves legal abortion bill in cases of rape, imposing very restricted deadlines to access the right. What should have been an achievement for the defense of the human rights of women and girls in Ecuador, ends up overshadowed by conservative approaches,” she tweeted.

Later, in a statement on behalf of the organization, Guevara-Rosas said that the ruling of the Constitutional Court of Ecuador was a hope for women and girls who see their rights getting violated every year and lamented that the law passed by the National Assembly of Ecuador is extremely disappointing. She stressed that “forcing someone to continue a pregnancy that is a result of rape is cruel and inhumane, and could constitute torture.” She called on President Guillermo Lasso of the conservative Creating Opportunities party, who now holds the power to ratify or veto it, to review the bill and return it to the assembly so that the legislators eliminate these restrictions and approve a new bill that is truly fair and restorative.

The Ipas Central America and Mexico recognized “the positive aspects of the abortion for rape law,” but emphasized that “an authentic fair and restorative law must guarantee safe abortion services without time or legal barriers to victims of sexual violence.”

The Latin American and Caribbean Women’s Health Network, in a series of tweets, condemned that “imposing deadlines for women victims of sexual violence to have access to abortion ignores the reality of girls, women and young people who live in rural areas; limits the exercise of their right to decide, re-victimizing them; opens the door for the obstacles that arise in access to deepen even more; and immediately generates the exclusion of a large percentage of women, young people and girls who abort after 12 and 16 weeks of gestation.”

Hours before the long-awaited vote took place, dozens of women organized a sit-in in front of the National Assenmbly in the capital Quito, to demand respect for their rights, and against the torture of clandestinity and forced motherhood.

Some protesters sat partially naked holding up posters describing the plight of women forced to bear children resulting from rape. Empty chairs were placed as part of the demonstration to represent women who died from clandestine abortions or while giving birth.

“Kelly should be playing with her friends, but she is taking care of her rapist’s son,” “Five weeks ago, Guadalupe requested an abortion for rape. She’s in her 18th week and still waiting,” “Paty is 11 years old and urgently needs a cesarean section. The doctors say her body is very small and she could die in the process,” “Amparo is 14 years old, lives in an Amazonian community that is difficult to access. She travels 6 hours to receive health care. She has a 20-week high-risk pregnancy. She prefers to die before giving birth to the son of a rapist,” read some of the posters.

Protest actions were also organized in Guayaquil and Azuay cities.

Why is decriminalization of abortion important in Ecuador?

Child rape and child pregnancy are the harsh reality of Ecuadorian society today and have become the primary concern of the feminist movements in the country. According to data from the State Attorney General’s Office, on an average 14 rape complaints are received per day, three of them are from girls under 14 years of age. Seven girls under the age of 14 give birth each day, most of them due to sexual violence by a known adult.

According to figures from Surkuna, regarding the percentage of women who access abortion due to rape, 78.6% of girls or adolescents will not have the possibility of opting for one until 18 weeks.

The imprisonment and prosecution of women for seeking abortions is another sad story. According to the Ministry of Public Health, every year over 21,000 women come to public hospitals seeking care for spontaneous and induced abortions, all to protect their lives or health, and many face criminalization.

The statistics from the State Attorney General’s Office showed that between 2014 to 2019, 286 women were imprisoned in the country for the crime of consensual abortion. Similarly, the Council of the Judiciary registered 134 cases, 80 of women who had an abortion with their consent and 54 of people who accompanied or had the women abort with their consent, such as mothers, friends, partners, doctors, etc.

The information from a group of human rights organizations, including Surkuna, highlighted that the criminalization of abortion constitutes a problem of social injustice and discrimination. According to the “Report on Access to Justice for Women in Ecuador,” the rights organizations asserted that the majority of those criminalized had low economic resources, and belonged to the Afro-descendant and Indigenous population.