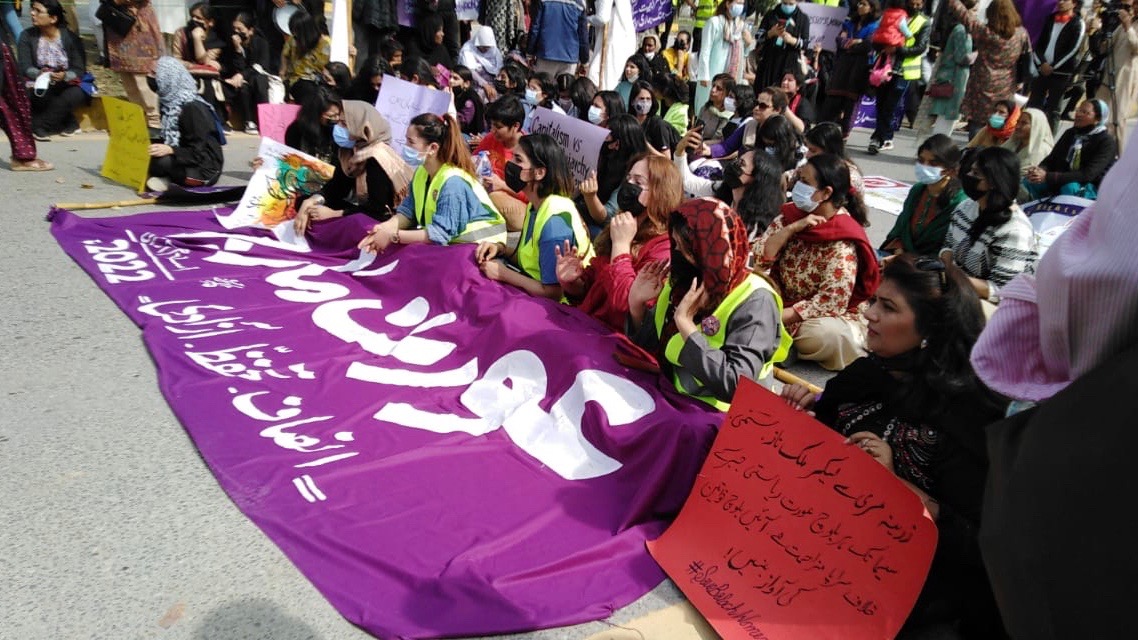 On Tuesday, March 8, several cities in Pakistan, including Lahore, Karachi, Multan, Faisalabad and Islamabad, saw massive rallies led and organized by women under the banner of “Aurat March”, a nationwide annual event held in Pakistan on the occasion of International Women’s Day.

We said March To Hoga..

The Aurat March first started five years ago in 2018 at the Frere Hall grounds in Karachi to initiate a discussion on gender, violence and patriarchy in Pakistan. Similar marches were organized in 2019 in Lahore and Karachi by Hum Auratein (We the Women, a women’s collective) and elsewhere in the country, including in Islamabad, Hyderabad, Sukkur, Quetta, Mardan and Faisalabad. These were led by Women Democratic Front (WDF), Women’s Action Forum (WAF), and other groups. Many left groups like Progressive Student’s Collective (PSC) and Progressive Students Foundation (PRSF), as well as mainstream political parties like Pakistan Peoples Party (PPP), have supported the annual Aurat March rally.

In the 2021 Gender Parity Index released by the World Economic Forum, Pakistan ranked 153 out of 156 countries globally, two spots lower than its ranking in 2020. In South Asia, it fared only better than Afghanistan in its gender gap rankings.

As you all know a few hours left in our Aurat March Multan. Firstly, we are excited that a number of intellectuals are going to join our March. It would be a full fun and safe space for all. We are completely overwhelmed. #AuratMarch2022 #AuratMarch pic.twitter.com/opNXw7Vusz

Using art, exhibitions, folk music, posters and placards, mobilization around Aurat March has amplified in terms of the causes addressed as well as participation.

The slogan of this year’s march was “Ujrat (wages), Tahaffuz (security) and Sukoon (peace)”, reflecting the event’s engagement with socio-economic aspects of patriarchy and capitalist economy. Over the years, the march, which has attracted several thousands of participants from diverse communities including women (cis and trans), non-binary individuals, members of the khawajsira (name for transgender persons in Pakistan) community, and religious as well as ethnic minorities like Hazaras and Balochis.

In Lahore, scores of men from religious organizations launched a “modesty” march yesterday, 200 meters away from the venue of the Aurat March. This was after comments by federal minister for religious affairs Noor-ul-Haq Qadri in a letter written to Prime Minister Imran Khan to ban the Aurat March and observe a ‘Hijab Day’ instead.

Only 200 meters & 4 police pickets away from the #AuratMarch2022 in Lahore scores of men from religious organizations have gathered for ‘Haya’ March.
Participants of the Haya March can be heard raising loud slogans against those taking part in the Aurat March#LIVE updates here pic.twitter.com/al4Dm5LyNm

A week before, hardliner Islamist party Tehreek-e-Labbaik Pakistan (TLP) called the women-led demonstration “against Islam”. The ban on TLP was lifted by the Pakistan Tehreek-e-Insaf (PTI)-led government in only November last year.

A Lahore court was petitioned last month to place restrictions on the organizers and participants of the march, whom the complainant said had an agenda to “spread anarchy, vulgarity, blasphemy, and hatred.”

In Islamabad, the president of the Jamiat Ulema-i-Islam-Fazl’s (JUI-F) Islamabad chapter had voiced opposition to the Aurat March, warning that they would use the “baton” to stop it. This is exemplary of the violence-centric notion of justice that the Aurat March organizers aim to counter through this year’s theme of reimagining justice.

In 2021, opposition to the Aurat March peaked with an uproar across social media against one of the slogans – “My body, My choice”, which was raised during one of the marches. These events have led to organizers and activists involved with the Aurat March facing FIRs, rape threats and cyber-bullying.

Five years of evolving narratives in Aurat March: What changed and what’s next?

Women’s marches have been an integral part of the women’s movement and other social movements since the formation of the state of Pakistan.

In the past five years, the Aurat March has been raising pressing issues faced by women in the country from abortion rights, to challenges faced by rape survivors, child and sexual abuse survivors, honor killings, and transgender rights. At the same time, the march as an annual event has worked to mobilize on socio-economic causes like environmental rights , better working conditions, invisible exploitation of trans communities and the reproductive labor of women, and education.

Nighat Said Khan, founder-member of the Women’s Action Forum (WAF), spoke to Peoples Dispatch on the completion of five years of the Aurat March event: “The march is a result of accumulating efforts over the years. It has taken decades to achieve even basic rights like assembling peacefully to discuss issues being faced by women in the country. The march is only a forum or the beginning point of conversations that we introduce every year in our themes, hence the mobilizations are only march-centric.”

On this year’s theme, the feminist-activist indicated that there was participation not only of different ideologies, but also different versions of feminism. “The reimagining of justice as members of a society is important if definitions of justice are to shift from crime/criminal centric to survivor-centric. The discussion on death penalty is limited to feminist groups in Pakistan as of now, however, beginning such conversations can be credited to the young women who participate in large numbers in the Aurat March.”