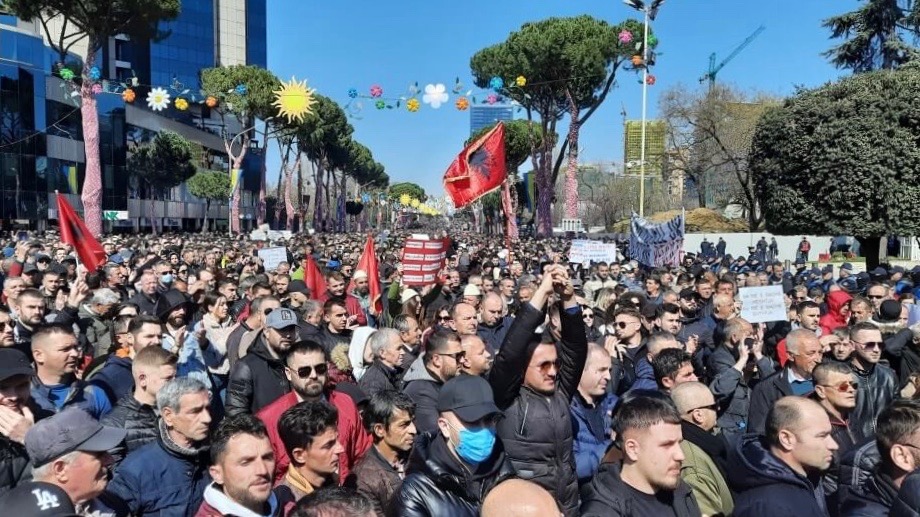 Albania is witnessing widespread protests due to rising fuel and food prices. Protests started in the second week of March and have intensified over the last week in different parts of the country. On Saturday, March 19, a major mobilization took place in the capital city of Tirana where thousands marched from the Skanderbeg Square to the prime minister’s office. In some places, police action was used to suppress the protests. More than 200 protesters were also arrested last week.

The ongoing war in Ukraine has resulted in a massive rise in fuel prices across Europe, including in Albania, which has led to steep rise in the prices of food and other essential commodities. Fuel prices have been rising before the beginning of the war in Ukraine, however, as local businessmen exercise almost complete control of the sector. According to reports, on March 14, the price of Octane-95 petrol in Albania soared to 223 Albanian leks (USD 1.978) per liter, around 30% higher than a week before. Albania is heavily dependent on automobile transport as the network of public transportation is extremely weak. This is particularly true for parts of the country excluding Tirana, where everything depends on cars.

The protesters have demanded that the government remove taxes on petrol. Currently, government taxes account for 53% of the final cost. People are also demanding a temporary suspension of VAT on basic food items. Protesters claim that the corrupt nexus between the government and monopolists has worsened the crisis and that the protests will continue until their demands to lower prices are met.

Regarding the mobilization on March 19, action group Organizata Politike, an active participant in the protests, demanded the establishment of an independent national agency to control and determine the ceiling of oil prices and export products. It also called for an independent investigation into the prevalent oligopoly in the hydrocarbon sector, especially the bankruptcy and destruction of the oil processing plant in Ballsh. The group asked for a 1% tax on the assets of men whose wealth crosses the threshold of EUR 1,000,000 (USD 1,105,500), as well as a 7.20% profit tax and dividend on big corporations and businessmen.

As of Monday, 21 March, the prime minister Edi Rama has rejected the possibility of reducing taxes on fuel, but instead announced 4.1 million euros in subsidies to the agriculture sector. It is yet to be seen how this move will affect the people’s mobilization.

Mirela Ruko from Organizata Politike had earlier told the media that oil reserves in Albania are estimated to be 400 million tons and 1/8th of these reserves have been used so far. These reserves are owned by “Bankers Petroleum” and all the oil extracted is exported, Ruko said. For the past four years, the Ballsh oil processing plant has not been functioning, which used to cover 33% of the domestic market. “Currently, Shefqet Kastrati, owner of Kastrati SH.A, is the country’s largest importer for wholesale and also owns the petroleum market, making it a monopolist in the market,” she said.

“We have oil, but it’s not ours! We have a government, but it is not ours! We had an oil tank, but now we don’t have any more! Only Shefqet Kastrati is left and he will sell us oil for as much as he wants!” she added.

Qemal Cicollari from the leadership of the Communist Party of Albania (PKSh) accused prime minister Edi Rama of blaming the energy crisis on the war in Ukraine to divert the people’s anger against his government which has been functioning in the interest of big businessmen. “Here also, a handful of capitalists and hydrocarbon conglomerates are benefiting from their speculative maneuvers over the energy crisis, which peaked after the Russia-Ukraine war,” he said.