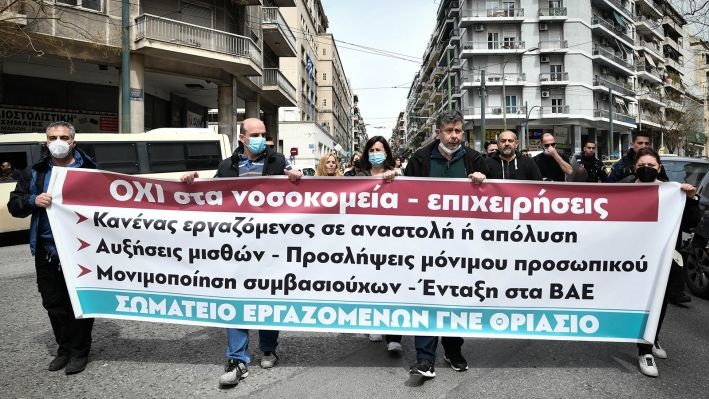 Health workers in several cities in Greece organized a three-hour work stoppage on Wednesday, 30 March, to protest a new healthcare bill proposed by the government. According to the workers and their trade union representatives, the reform will adversely affect the national health system, which has already been weakened by two years of pandemic response and staff shortages. In addition to the work stoppage, workers also staged marches in Athens and other cities, where they were faced with police attacks.

The government’s reform emphasizes strengthening the private for-profit health sector, including public-private partnerships (PPPs), and seeks to further the privatization and deregularization of healthcare in Greece. The new legislation will allow physicians to perform surgeries in hospitals after working hours for payment, temporarily turning public hospitals into private clinics. It also aims to introduce a capitation-based referral system for accessing secondary health care, with all citizens being obliged to register with a private family doctor to be able to seek care in hospitals. Finally, the reform proposes changes in the terms of employment for health workers – focusing on short-term contracts rather than permanent jobs.

There are now approximately 10,000 workers less in the Greek health system compared to March 2021. The government’s solution to the staff shortage has been recruiting temporary staff, who struggle with the high workload and precarious working conditions. Temporary workers have fewer rights when compared to permanent staff, especially when it comes to both salaries and working conditions. Yet, the proposed reform does not offer them any improvement in these areas.

Ioanna Dimoula from the Panatika Committee of Contract Workers said to 902.gr, “Especially over the past two years of the pandemic, we have fulfilled critical needs in public health units, making up for a significant part of the large shortage in staff of all specialties and working, side by side with permanent colleagues, with the same qualifications and the same obligations, but with ‘cut’ rights.”

Rather than making the temporary posts permanent and ensuring that the health care system can continue to function, the new bill proposes that workers be offered contract renewals for periods as short as three months, something that would further undermine their employment security. According to Christos Karachristos from the Union of Hospital Doctors of Thessaloniki, “The new health system does not have room for permanent employees with rights.”

Staff shortages and inadequate ways of addressing it will surely cause issues for patients too, as will the pursuit of even more privatization in the health sector. In Karditsa, the staff deficit has already led to the cancellation of some radiology procedures, including MRI and mammography.

Because of such examples, Communist Party of Greece MP Maria Komninaka noted that the health workers’ actions represent a struggle of all the people for the protection of the public health system. She urged the workers to persist in their struggle and join the national strike announced for April 6, as public services trade unions are calling for an increase of public funding and prevention of privatization.